Guest authors needed - all genres! Are you an author? Would you like to share a little bit about a current work in progress on a future WIP Wednesday? Then I invite you to be my guest. Please e-mail Erin O'Riordan (erinoriordan AT sbcglobal DOT net).

Next week's WIP Wednesday guest will be Rue Allyn. I'll also be a guest on Rue's blog that day, talking about "The Spell You Cast," and why witches are an appropriate subject for Easter time.

I continue to work on my submission for Melange Books' Having My Baby anthology. The deadline was supposed to be April 1, but now it looks as if it's been moved (again) to July 1. Or is that an April Fools Day joke?

In this totally historically accurate clip, the Pagan Simpsons are worshiping Baal with sacrifices. Baal is not the name of any particular god, but a Near Eastern word that means "lord." In The Woman's Encyclopedia of Myths and Secrets, Barbara G. Walker connects Baal to the Irish god Bel, the sun-god who presided over Beltane. Some Baals are forms of the Annually Dying and Returning Vegetation God wedded to the mother-goddess.

The feminine form of Baal is Baalit, but the goddess is often called some form of the word Asherah. After all, she is the primary being, the mother of life, and he is simply her consort - as necessary, perhaps, but not as widely honored.

Fans of Stargate: SG-1 probably think of the South African actor Cliff Simon when they think of Baal: 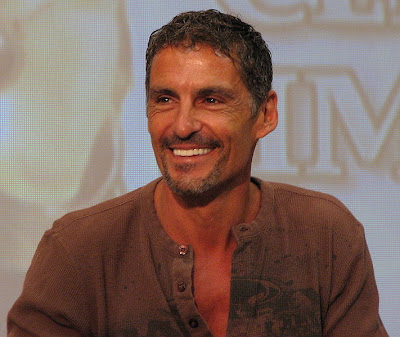 The former swimmer and model may have played an imperious, despicable villain pretending to be a god, but he looked hawt doing it. To paraphrase the Jay-Z/Kanye West collaboration "[Expletive Deleted] in Paris," he Baals so hard motherfuckas tryin'a' find him. Speaking of which, there's a clever and utterly literate parody called "Bitches in Bookshops:"

That's my week in writing - what are YOU working on?

I'm afraid so, Sheila. Easter is creeping up on us.