Review ~ Dead Is a Battlefield by Marlene Perez 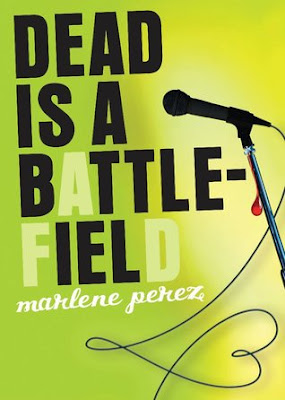 This book marks the beginning of the Jessica Walsh era - Jessica takes over as heroine of the Dead Is series from Daisy Giordano. Psychic Daisy and her sisters are the Walsh's next door neighbors, and Daisy's boyfriend Ryan is the best friend of Jessica's older brother Sean. Jessica doesn't have psychic powers, but she does have a strange new tattoo that just appears without the use of needles. She learns she's a virago, a supernatural warrior-woman destined to guard her hometown of Nightshade, California.

I wondered if I would like this series as much with Jessica in charge as I did with Daisy. I did, pretty much. The ending was a little rushed, but I imagine some of the confusion will be further cleared up in the next volume, Dead Is a Killer Tune.

While battling an outbreak of a strange infection and an even stranger ant farm, Jessica develops a crush on the new lead singer of local band Side Effects May Vary: her fellow Nightshade High student Dominic Gray. But Dominic seems to have a split personality when it comes to Jessica; sometimes he seems into her, and sometimes he's all over Selena Silvertongue. What's up with Dominic? Will Jessica survive the danger - and Flo's virago workouts - long enough to find out? 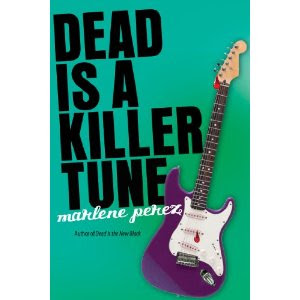 When I read Beauty Queens by Libba Bray, the Maroon 5 song "She Will Be Loved" ("Beauty queen of only 18...") kept getting stuck in my head. I couldn't read this book without repeatedly singing "Love is a Battlefied" by Pat Benatar.

Fortunately, I like this song. It reminds me of when I was a little girl in the '80s. In She's a Rebel, Gillian G. Gaar wrote, "Female performers rarely experienced the attacks that groups like N.W.A., 2 Live Crew, or Judas Priest did, though their work was scrutinized by organizations like the PMRC, who, in analyzing sexism on MTV, gave Pat Benatar's 'Love Is a Battlefield' video a negative rating, citing: 'one performer fights with her ornery parents then leaves home to become a hooker.'"

I purchased Dead Is a Battlefield at my brick-and-mortar Barnes and Noble and was not compensated for this review in any way.