Movie Opinion: Peter Parker's Aunt May Is a Goddess 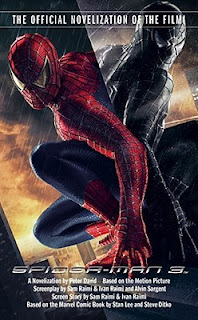 First, a confession: When I was three years old, I carried a Spiderman doll around with me everywhere I went.  When I ate, Spidey had to sit at the table with me.  The little Spidey outfit came off, and when I took a bath, Spiderman had to take one, too.

I haven’t had much interest in Spiderman since then.  He seemed to fall outside my girly world.  I didn’t plan on seeing the first film, and did so only thanks to the enthusiasm of my comic-book-crazed younger brother.  I was a bit more willing to sit down and watch the second one, if only because of Alfred Molina.  (I’ve had a slight crush on him ever since watching him try to seduce his wife by eating yogurt on the sitcom Ladies’ Man.  Chocolat only sealed the deal.)  To get me to the theater to see Spiderman 3 once again took the intervention of my brother.

Throughout all this chaos, one figure remains the wise, stable moral authority.  She is the archetypal crone, the goddess of wisdom.  That figure is Peter Parker’s Aunt May.

Played by Rosemary Harris, she is (or should be) the face of elderly feminine beauty, with her flawless skin and pretty hazel eyes.   She gives Parker two important clues as his makes his way through the maze of his life.  First, she tells him that if he wants to get married, he has to be willing to put his wife before himself.  Again and again, we watch Parker do stupid, selfish things to his girlfriend Mary Jane.  His plans to propose in a French restaurant come at a woefully bad time.  He kisses another woman in front of her.   He turns down her offer of help in a fit of anger.  Only at the end of the film does he master Aunt May’s lesson of respect for marriage.

Parker does the same stupid, selfish things to his “best friend” Harry Osborn.  When Osborn loses his memory, Parker withholds the truth.  Later, under the influence of the black suit, which makes him more aggressive, Parker delights in attacking and seriously wounding Osborn.  We watch as Aunt May’s truth about marriage stretches to include friendship:  to be a friend, Parker must learn to put his friend first.

When Parker reports (wrongly) that the man who killed Aunt May’s husband Ben has been killed by Spiderman, he expects Aunt May to be happy, or at least to feel relieved.  She doesn’t.  Instead, she dispenses her second clue to the maze: revenge is destructive.  “Spiderman doesn’t kill,” she says.  Power is to be used to protect the innocent, not to punish the guilty.

With these insights, Aunt May Parker fits either of these definitions of the crone:

“ As the crone, the woman represents the Goddess of wisdom and prophecy . . . [and] contribute[s] invaluable insight and the perspective of age.” (Naomi R. Goldenberg, Changing of the Gods)

“ . . . The modern female elder is often a beautiful, savvy woman who uses the knowledge she has gained through the years, and the inherent spiritual wisdom of interrelatedness that continues to grow throughout the years, to impart values that support and encourage the growth of others and the preservation of life.” (Joan Borysenko, A Woman’s Book of Life)

That’s a strikingly powerful female image for a movie aimed at adolescent boys.  Now, to be fair, the message of friendship, not revenge, is also repeated by the film’s male elder, Osborn’s man-servant Bernard (John Paxton).  And in the voice-over narration in one of the final scenes, Parker states that Osborn, not Aunt May, taught him which moral values to uphold.  Parker is wrong.  Aunt May is the film’s preacher, its priestess, its crone-goddess of wisdom.

Another message of Spiderman 3 is that stereotypical male behavior is wrong.  The black suit  turns Parker into a walking male stereotype.  It makes him use the extra power it gives him to bully ever other male who crosses his path.  Whenever a strange woman crosses his path, he does a smarmy, repellent kind of mating dance for her.  He blatantly uses his flirtations with other women to hurt Mary Jane’s feelings.  And in the midst of all his aggressive and sexual energy, Parker shoves Mary Jane to the ground.  The audience’s sympathy resides with Mary Jane; throughout none of this has Parker been presented as anything but a jerk.  Spiderman 3's moral path is clearly a feminine one.  The right thing for Parker to do is to behave according to the rules of the goddess, Aunt May.

Although it was written by three men and aimed at adolescent males, there is more to Spiderman 3 than Kirsten Dunst playing the damsel in distress while the male characters get all the good lines.  The film places value on female elder wisdom, respect for marriage, and friendship.

There are only two things that I would have done differently, had I been one of the film’s writers.  First, I would have given speaking roles to some of the African-American actresses in the film.  Several of these actresses are noticeable, especially in the flirty-black-suit-Parker scenes.  But their roles are simply that: to be noticed.   To be used as human props, rather than individuals.  This disturbing media trend should have ended a long time ago.

Second, I would have written in more male nudity.  Sure, we get to see the well-built James Franco in his underwear.  But is the underwear really necessary?  And the scene with Peter Parker in the shower could have used a floor-to-ceiling tracking shot.  Tobey Maguire’s not the most traditionally pretty guy ever to grace the screen in a superhero suit, and that’s what I like about him.  He’s like one of the real-guy guys you see in the pages of Sweet Action*.  Surely someone could have convinced Tobey Maguire to bare all for his art.

My childhood Spidey would take off his clothes for me.