Who is St. Patrick?

This may come as a shock, but St. Patrick wasn’t born in Ireland. He was born in Scotland around the year 387, in a colony of the Roman empire. Both of his parents were Roman citizens. At 14, he was kidnapped by a raiding party, taken to Ireland and forced to work as a shepherd. His masters were Druids, practitioners of the ancient Celtic religion. Christianity had already been introduced to Ireland, but it hadn’t really caught on yet.

Patrick’s captivity lasted until he was about 20, when he escaped and returned to his family. However, he felt a spiritual calling to return to Ireland as a missionary. He died there in about 461, after 40 years of preaching and performing miracles. He’s said to have used the shamrock to teach the idea of the Trinity (the idea of God as being the Father, Son and Holy Spirit all in one).

Pagan lore claims that “Saint Patrick” is a myth, a Christianized reference to another Trinity: the Morrigan, the Irish triple goddess composed of maiden Brigit, mother Babd and death-aspect Macha. (Macha is the bean-sidhe, the woman of the fairy-mound, better known as the banshee.) Patrick was the mythical young warrior who was annually wedded to Brigit, then sacrificed to the Morrigan, only to rise again the following year to have the whole cycle start over. Brigit was Christianized as St. Brigid of Kildare, a nun who founded Ireland’s first convent near the place where the priestesses of Brigid once tended a sacred fire. 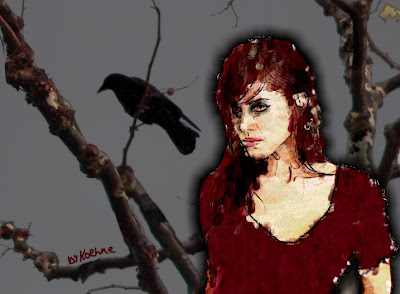 (The Morrigan in an image by André Koehne)

In Ireland, the saint’s day is observed as a religious holiday, with charity shows, parades and church services. In the U.S., community celebrations of St. Patrick’s Day originated in Boston, which boasts a large number of Irish-Americans. It’s New York City, though, that holds the oldest St. Patrick’s Day parade; the tradition began in 1762.

No one knows exactly who poured the first green beer, but Chicago has dyed its river green every year since 1962. They use enough biodegradable, vegetable-based dye to keep the green color visible for one day. Favorite activities on St. Patrick’s Day include cooking Irish foods like colcannon, listening to Irish music, and learning Gaeilge words.

Gaeilge, Anglicized as “Gaelic,” refers to a group of closely related languages native to Ireland, Scotland and the Isle of Man (where the language is called Manx). Other Celtic languages, including Welsh and Cornish, are more distantly related. Some Gaeilge phrases:

An Irish drink, according to The Simpsons 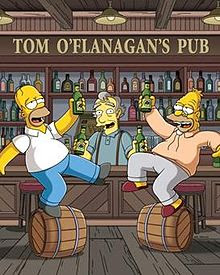 Carve out a hole in a potato large enough to hold a shot glass. Place shot glass in potato. Pour Bushmill’s whiskey into shot glass. Float potato in pint glass of Guinness stout. Spit in drink and serve.

Some Irish People I Love

Yes, his father was English, but his mother was Irish, and he was born in County Dublin.

"He Wishes for the Clothes of Heaven"

"Had I the heavens' embroidered cloths,
Enwrought with golden and silver light,
The blue and the dim and the dark cloths
Of night and light and the half-light,
I would spread the cloths under your feet:
But I, being poor, have only my dreams;
I have spread my dreams under your feet;
Tread softly because you tread on my dreams." 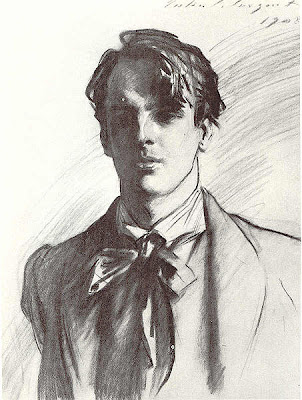 2. Dolores O'Riordan. No relation (that I know of - we could be distant cousins). This Limerick-born rocker chick may have made her fame in '90s fronting The Cranberries, but to this day she's considered one of the 10 richest women in Ireland. You go, girl!

What vampire lover doesn't appreciate the first real master of the vampire novel? I've read Abraham Stoker's best-known novel, originally published in 1897, twice. He was born in Clontarf (a district of northern Dublin).

Ellen Barkin's baby daddy is one of the Irish dudes I'd most like to see lewd. All I have to say to impress you is "He played Keaton in The Usual Suspects," but he's done so much more than that. His two most Celtic-inspired films are Into the West and Excalibur. He studied archaeology before becoming an actor and speaks Spanish fluently. Byrne was born in Dublin.

Also appearing in Excalibur, Neeson is from Ballymena, Northern Ireland (like my Irish ancestors, who came from Derry). All I have to say to impress you is "He played the title role in Schindler's List." Well, he played Oskar Schindler, not the list, but you get the idea. He's done so many great things, from the voice of Aslan in the Chronicles of Narnia films to that fight with Christian Bale in Batman Begins to his guest appearance as a Catholic priest on The Simpsons.

I always imagine Neeson and Byrne as having something of a friendly rivalry because Byrne, as Lord Byron, kissed Neeson's wife Natasha Richardson (as Mary Shelley) in Gothic.

Walker, Barbara G. The Woman’s Encyclopedia of Myths and Secrets.

Portions of this post originally appeared at theholidaydiva.blogspot.com, a blog that apparently no longer exists.
Posted by Erin O'Riordan at 7:28 AM

I just learned so much!