Guest authors needed - all genres! Are you an author? Would you like to share a little bit about a current work in progress on a future WIP Wednesday? Then I invite you to be my guest. Please e-mail Erin O'Riordan (erinoriordan AT sbcglobal DOT net).

Erin O'Riordan: I've been busy this week with my day job, editing. I have about two more weeks to put the finishing touches on the story I'm tentatively calling "Polyandry" (see last week's WIP Wednesday). Actually, I think a nice title for it might be, "It's Good to Be Princess." Any thoughts on that title?

Any thoughts on this, the cover of an upcoming book that contains my short story "Aftercare?" 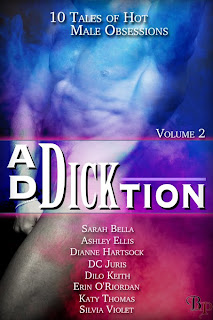 On Friday morning I woke up from a really detailed dream that I'm considering turning into a short story. I hesitate to share too much of it for precisely that reason. Suffice it to say, under a scenario in which a weird biohazard reduced the human population to about 300 individuals, including myself and the de facto leader of the survivors, my husband Tit Elingtin. Hubby was busy, what with the effort to ensure the survival of the human race and all, so I developed an attachment to a fellow survivor.

When I woke up and told Tit E. of this dream, he gave me a good idea for how this could be a pretty compelling piece of short fiction. But I won't have time to start it in earnest until Friday, despite the fact that my brain's trying to tell it to me when I'm falling asleep this past few nights.

Thursday night TV is a particularly rich source of material for dreams. First there's The Vampire Diaries. On the CW, it's followed by the other TV series based on a series of novels by L.J. Smith, The Secret Circle. I watched only the first couple of episodes, but I stopped watching it because I found some of the characters too mean-spirited, and I felt like some of the mean-spirited girls were being put out there as protagonists instead of villains. (It's kind of the same problem I had with Kiss, Crush, Collide.) 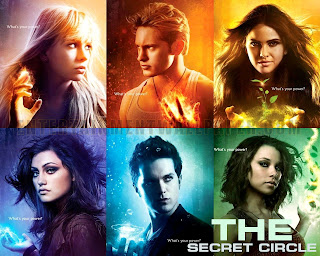 So then I started watching Person of Interest on CBS after Vampire Diaries. The main thing that recommended it to me was that it stars Jim Caviezel. He's in one of my favorite movies (don't laugh - I know the plot is highly improbable), Frequency. On P of I, Caviezel plays rogue government agent Mr. Reese. Mr. Reese will shoot you in the kneecaps if he needs to. He's a badass. It's totally hot. 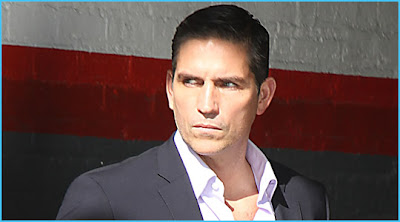 Therefore, it should not surprise you to learn that in my dream, the survivor in whom I had a great deal of interest resembled Mr. Reese. He is as yummy as the chocolate-covered peanut butter cups which bear his name.

Since that night, I have decided that Mr. Reese and Detective Carter should be gettin' it on. No romance, just stress-relief sex. I am not the only one who considers the possibility of Reese/Carter; consider only "Pushing Boundaries," fanfic by The Dork Mistress. I haven't loved a fanfic this much since Shameless by Helens - and that has a bisexual Christian Bale.

Carter licked her lips, "Y-Your idea of fun can be rather…flawed, John."

"Care to test that theory, detective?"

His idea of fun, in this fanfic, is eating her out in an elevator. TDM goes on to write:

She moaned loudly; her head thumbing against the wall as one of her hands raked its way through his short black and grey hair. She felt his tongue dart in and out; her hips rolling through each wave of pleasure.

Carter was a gasping and moaning mess, trying to remain upright as he dragged the tip of his tongue over her clit. It was as if hot electricity had struck through her, and she swore she had blacked out for a second. Carter was getting close.

Tugging on his hair, Carter dropped her mouth open in an attempt to warn him, "J-John…John…I-I'm…"

Her words failed her as John decide to hum in response; the lewd noises his actions made reaching her ears. She cried out; her orgasm very strong and very intense.

Um - yes, please. But I do feel a little bad for Reese, 'cause he doesn't get his in this story. Now he has to go home and take a long, hot shower.

By the way, some people also "ship" Reese and his male associate, Mr. Finch. I'm not so into Reese/Finch. Mr. Reese is a 10+, but Mr. Finch is a 7 on a good day. Not that looks are everything, or that I object in principle to M/M ('cause we all know I don't), but I really enjoy the Reese/Carter chemistry.
Posted by Erin O'Riordan at 6:55 AM

Bummer - no P of I last night because of college basketball. I ended up watching the first half of 'Secret Circle,' then going for a walk.

P.S. If you're into "Rinch," this is a good quick-and-dirty one: