Dig in to a delectable winter treat, as warm as a potato pancake on a frosty Hanukkah night!

Caught up in the magic of the Festival of Lights, Gabriella wants everything to be perfect for her holiday with Jared. Jared has very specific tastes-and a slight obsession with teasing the individual flavors out of the aromas of fine wines. Even the kosher wine he chooses for the first night of Hanukkah is subjected to his beloved wine aroma wheel.

But wine is not the only thing that can be tasted, analyzed, and savored. Gabriella and Jared discover new uses for Jared's favorite toy as the Hanukkah candles burn down...

Some of my most recent stories and articles

Anthologies: My short story "Oliver's Famous Clam Chowder" is featured in the Torquere Press anthology Love Bites, now out in paperback and e-book. (Yikes! There's an editing mistake in the print edition, with the same character called by 2 different names!) 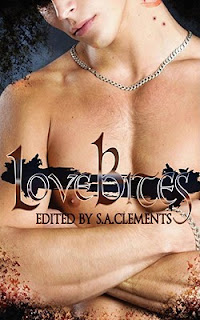 My short story "Handsome and Regretful" appears in a chapbook from Down in the Dirt.

Can't decide what to read first? Check out my short fiction collection.

Playgirl published my story "Going With the Flow" in the June issue. Oysters and Chocolate (www.oystersandchocolate.com) has published my review of the film Blue Magic and my short story "Cinnamon Honey Bear."

Coming up next: Bent magazine will publish my story "Bat Mitzvah," and Sinister Wisdom will publish one called "Soaked."

I've also written fiction and essays for webzines including Clean Sheets and The Shadow Sacrament. If you're over 18, see aeess.com for details.
Posted by Erin O'Riordan at 7:12 PM 1 comment:

I Finished the First Draft of MIDSUMMER NIGHT

When my first novel, Beltane, was released by Eternal Press last month, I let all of my readers know that Beltane was going to be the first in the 12-part romance series I'm calling Pagan Spirits. Tonight, I've finally completed the first draft of the second novel in the series. I'm calling it Midsummer Night.

Midsummer Night continues the story of Zenobia "Zen" Van Zandt. When we last left her, she was falling in love with handsome graduate student Ramesh Sudra. She was also embarking on a new career as a midwife, incorporating her knowledge of Pagan and witchcraft tradition with Western medicine. The love between Zen and Ramesh will be tested, however, first by her year-long vow of celibacy, then by a undergraduate student who comes between them, and finally by Ramesh's tradition-minded family. Will their story be one of happily-ever-after, or only might-have-been?

Find Beltane at www.eternalpress.ca/beltane.html. If you enjoy red-blooded romance and write reviews, I would sincerely appreciate some reviews of Beltane. You can read more of my writing, including links to many free stories, at www.aeess.com (recommended for readers 18+ only).

The Wheel of The Year. . by Maureen Murrish. $5.99 from Smashwords.com
The Wheel of the Year is a beginner's guide to celebrating the eight traditional pagan festivals of the the year.

Posted by Erin O'Riordan at 7:31 AM No comments: