Happy Easter! It's also Pesach (Passover); tonight will be the second seder night.

Some may think that because my blog is called Pagan Spirits, I must not celebrate Easter or believe in Jesus, but this is not the case. I was raised Catholic, you know. Now when I want to go to church, I go to Episcopalian services, because I kind of fell in love with the Church of England's American sister. Just 'cause I'm a witch doesn't mean I don't love Jesus.

No, really, you can do that - ask Joan Borysenko. She wrote a fabulous, amazing book called A Woman's Journey to God.

On pages 218-226 of this book, Borysenko writes the passage that gave me a new appreciation of Yeshua bar Yahosef (Jesus, son of Joseph, in Hebrew) as the mythological archetype of the Annually Dying and Returning Vegetation God, like Tammuz, Osiris or Dionysus. Based on the work of Margaret Starbird, the book Holy Blood, Holy Grail (the same book on which The Da Vinci Code is partially based) and her own imagination, Borysenko created "Jesus and Mary: Partners in the Hieros Gamos."

Heiros gamos, as readers of The Da Vinci Code know, is Greek for "sacred marriage," a sexual rite in which the woman represents the Goddess and the man represents a male God. Borysenko envisions Mary of Magdala (Magdala being Hebrew for "watchtower") as a zonah, a word that means both prophetess and "prostitute." Not "prostitute" literally in the sense that they took money, but they had sex with the various worshipers who came to the temple. In modern Hebrew usage, "zonah" also means Jewish woman who has sex with non-Jewish men.

Mary Magdalene was a priestess of the Mother Goddess. In Borysenko's telling, Jesus comes to the temple of the Goddess, called Esther. Esther is a form of the goddess-name Asherah, or Ishtar. When the young priestess Mary reached a mature age, she and Jesus made the sacred marriage. It's a beautiful story.

Jesus is the archetypal solstice-born male god who becomes the consort of the Goddess, delights her with lovemaking, dies and goes to the Underworld and then is reborn to start the whole process anew.

In The Woman's Encyclopedia of Myths and Secrets, Barbara G. Walker links Esther/Asherah/Ishtar with other Near Eastern goddesses, including Egyptian Isis (called Star of the Sea, a title also applied to Mary the mother of Jesus - Key West has a Catholic church called Mary Star of the Sea), Indian Kali and Astarte. Astarte was called Queen of Heaven, where she kept the souls of the dead in the form of the stars. She is recalled in the Bible in Jeremiah 44:19:

A beautiful image of Astarte by the artist Amanda Clark can be found here at Love of the Goddess blog.

"Esther" is the Hebrew word for "star," and Walker contends the Biblical Esther celebrated at Purim is a version of Ishtar; Mordecai is Ishtar's consort Marduk. In this version of the myth, rather than Marduk/Mordecai being personally sacrified, a proxy is accepted in his place - Haman.

The virgin form of the mother goddess is Mari, and it is no coincidence that the mother of Jesus and the bride of Jesus have the same name. In the ancient Near Eastern legend, the Goddess is both mother and lover, the young God both son and lover in a never-ending yearly cycle of sacrifice and rebirth. It's an extended metaphor for the yearly cycle of the seasons and the crops, so try not to be too freaked out by the incestuous implications. The son is the grain-seed that has to be buried in the earth (his mother) and "die" so he can sprout/be reborn and we can eat.

I said in a previous Easter post that the name of Ostara, a Germanic goddess said to be the origin of the name "Easter," may not be historically accurate. This is still true, although I will point out that Walker traces "Ostara" to "Astarte."

In a movie by A Douchebag Who Shall Not Be Named During Passover, this is Jesus.


This gorgeous Italian-American is Jim Caviezel, and he's who I'm imagining when I'm envisioning the sacred marriage of Jesus and Mary. (We won't get into the whole issue of why Hollywood likes Jews to be played by Italians; that's a rant for another day.) Your image of Jesus may vary.

It could be Christian Bale in Mary, Mother of Jesus. But it could be. 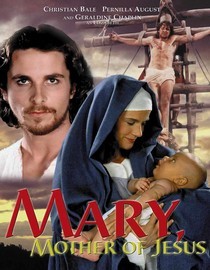 It probably won't be this.

Related songs in a Jesus groove:

"Rock Me Sexy Jesus" from Hamlet 2

"Crucified" - cover by German Goth-rock band Atargatis - appropriately, named for the Syrian mother-goddess, the mother/lover of Mithras according to Husain

"Judas" - Lady Gaga as an Italian-American Mary Magdalene - wouldn't she go great with Jim Caviezel as Jesus?
Posted by Erin O'Riordan at 7:30 AM

That was epic. I don't often get into religious history although I did study it in college for a bit. I was totally fascinated by The DaVinci Code but to be honest, my religious calling comes from more spiritual readings than historical or factual. I guess that's what makes religion so personal.

I love reading the history of the different aspects of religion... wish people who are more religious would read them, too.

You seem to have more religious knowledge than those devoted religious people out there, one that I am not. Epic post indeed.. And educational. Thanks!

As always a fabulously interesting post. Just stopping by to check in and tell you I gave you an award. Come pick it up :)

This was a fascinating post! I was also brought upCatholic but feel better at a different church.