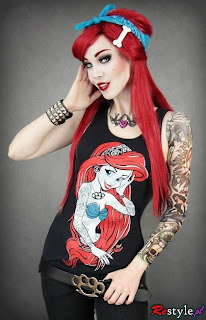 I know, I know, I know - the women in Disney cartoons, except possibly Mulan, are losers. They're passive damsels in distress who get by mostly on their sex appeal. The case against Disney princesses as role models for your daughters is laid out by Erik Wecks in Great Geek Debates: Disney Princesses vs. Hayao Miyazaki. 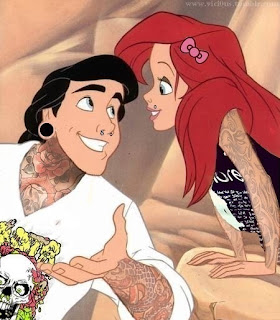 Guffaw if you must, but like Twilight, the Disney cartoons deliver on the classic romance novel formula. Walk with me for a moment on the cartoon characters who, in a fictional Disnified world, would be my baby daddies. CCILFs, you could call them.

5. Eric in The Little Mermaid. The prince in the 1989 adaptation of Hans Christian Anderson's beloved fairy tale is a feminist nightmare - his ideal woman is one with, literally, no voice at all. On a symbolic level, that's awful, although in real life, a woman with mutism would learn sign language and get on with her life.

But with Eric, you get this, among the most romantic of Disney tunes:


4. Aladdin. A thief and a liar, Aladdin was perfectly willing to live his life as the fraudulent Prince Ali if it would get him Princess Jasmine. He's a scoundrel. Yet we still root for him to get together with Jasmine.

The story of Aladdin comes from the Arabian Nights, but it doesn't seem to have been added to the book until circa 1709, when a French author included it. (Disney makes no reference to any of the translators or compilers of The Arabian Nights in the film's credits.) In the original folk tale, Aladdin is Chinese. Later storytellers located his home in Baghdad (the capital of modern Iran, but historically part of a number of different empires, including Genghis Khan's Mongol empire and the Ottoman Turkish empire), which Disney transformed into the fictional city of Agraba, but Aladdin and Jasmine are most likely Arabic or Persian. There are plenty of hot Persian dudes; just ask Bodazey Magazine. 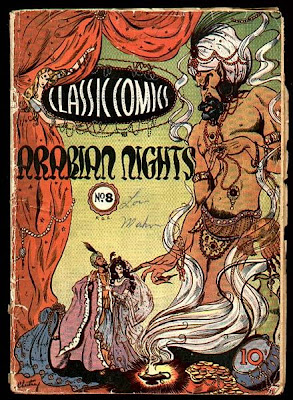 3. Prince Naveen of The Princess and the Frog. Voiced by hunky Brazilian Bruce Campos, Naveen is prince of an undetermined country. (His name is from India.) A misbehaving brat, he gets turned into a frog and takes hard-working, would-be restauranteur Tiana down into the swamp with him. Only true love saves them from a lifetime of amphibian-ness. Once you get past Eric, do you sense a theme? Disney princesses love them some bad boys.

Of course, in the Brothers Grimm version, the princess refuses to kiss the nasty, slimy frog and turns him into a prince by slamming him into the wall of her bejeweled bedroom when the persistent little critter insists on sleeping in her bed.

2. Flinn Rider, a.k.a. Eugene Fitzherbert, of Tangled. I just watched this the other day, which is what inspired this blog post. I like to think that Flinn, voiced by Zachary Levi (who also played Chuck on Chuck), is the first Jewish Disney prince. Sure, his name is super Anglo, but there is that running joke about the wanted posters making his nose look so big. I feel like this is a nod and a wink to the audience. Jewish on his mother's side, Anglo-Saxon on his father's, I say. Of course, the actor who voiced Aladdin, Scott Weinger, is also Jewish, but Aladdin himself seems to be Persian or Arab.

The Brothers Grimm, terrible with names, gave names to neither the prince in "Rapunzel" nor the princess in "The Princess and the Frog." Flinn is only a prince by marrying Rapunzel anyway; taking a page out of Aladdin's book, he begins as an orphan and a thief. Depending on the rules of Rapunzel's fictional kingdom, he may be considered a consort rather than an actual prince, since he's a commoner.

(As of this writing, the above Brothers Grimm e-book is free!)

1. Thomas from Pocahontas. Right now you're probably thinking, "Who?" Thomas is the young redhead who falls off the ship early in the cartoon. Later, his overzealous use of firearms nearly causes a war between the English and Pocahontas' tribe, the Algonquian people. But he's careless and naive, not intentionally bad. Most importantly, though, he's voiced by Christian Bale. He's no Wizard Howl, but for a Disney dude, Thomas is all right.

Note that I don't particularly enjoy this film. Not only does it have Mel Gibson cooties, but (hopefully embarrassed for the racist portrayal of American First Nations people in Peter Pan), the script goes way overboard on Pocahontas' tree-hugging nobility - and I say this with a healthy respect both for Mother Earth and for indigenous spirituality. Plus, it plays very fast and loose with a real, historical woman's life story. For one thing, she was approximately 12 years old the first time she met John Smith.

This is a naughty artist's rendition of the ginger Thomas, not the blond John Smith.

If you want to see the whole gallery of 20 sexy Disney dudes, visit the source: AcidCow.com.

So, who are your CCILFs - Disney or otherwise?

Oh boy. Well, since you mentioned Studio Ghibli... Wizard Howl is definitely at the top of the list. I think he'd have even done Sophie as an old woman!

Next would be Prince Charming in Snow White. He's the strong, silent type. Rides a horse very sexily.

Cale of Titan A.E. also not a bad cartoonified specimen of masculinity.

And although he's a cat, Baron Humbert von Gikkingen, would certainly be an interesting experience, but his male confidence certainly cannot be denied in The Cat Returns.

Flynn Rider has Errol Flynn's exact nose. By design. The slight arch, the lightly flared nostrils...it was as much a trademark as the laugh or the three dimple smile.

My favorite of the stripped Disney men is Milo from Atlantis. And not just because he looks like an idealized version of my husband. OK, mainly because he's exactly the sort of blond, sexy geek I love.