I'm not usually one to join in memes, but I love The Twilight Saga. Want to link up, or just join in the Breaking Dawn Pt. 1 madness? Drop by Fabulous But Evil.

Are you going to see Breaking Dawn at the midnight release?

Hells to the no! I want to watch the movie in peace, not in a ginormous, super-excited crowd. I'll wait ten days or so and go in the middle of the week.

I love me a good werewolf, but in this case, Team Edward all the way.

Favorite character in the series and why?

Carlisle Cullen, because he's so noble and such a perfect father-figure for Edward. And anyway, you might think that Emmett would be the wildest one in bed, but I bet it's Carlisle, 'cause sometimes it's the one you least suspect. 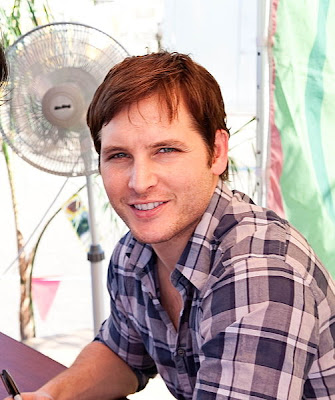 (I know - Peter Facinelli doesn't really look like Carlisle unless he's blond. The photo is by Tararebeka, Creative Commons license.)

Why do you love Twilight?

My mom wanted me to read the first book because she found it so romantic. "It made me remember being young and in love for the first time," she said. I was bored at the beginning of the book - all the exposition - but by the end, I was completely hooked.

Are the books or movies better?

A movie is just a story snack, but a book is a well-balanced story meal. In my imagination, the vampires are even more sparkly in sunlight than they made them in the movies.

If you're a Twilight fan, please leave a comment with a link to one of your Twilight posts so I can comment back!

The First Bite Is the Deepest by Elisa Catrina. $2.99 from Smashwords.com
“Funny and clever and emotionally hard-hitting” "A perfectly creepy read." Elisa Catrina's debut novel begins as a quirky send-up of vampire romance, but quickly turns sinister. High schooler Stella Ortiz starts dating the mysterious new guy, but her friends are convinced he's bad news: Sebastian misses tons of school, he day-drinks something that smells like pennies, and oh yeah, he's a vampire.

Gotta say he looks a LOT more delicious dark haired. Blonde doesn't look right on him and kind of washes him out. But hubber - he's barely recognisable in the other pictures. In a very good way. :)

I also have post with loads of hits but few comments which is why I rewrote/updated this one http://wordsinsync.blogspot.com/2011/07/vampire-awareness-month.html for another outing. I got more interest the second time and it's one of those posts which is always renewable :)