'Get Well Soon: History's Worst Plagues and the Heroes Who Fought Them' by Jennifer Wright

Get Well Soon: History's Worst Plagues and the Heroes Who Fought Them by Jennifer Wright

If your favorite podcast is Sawbones, this book is for you.

This is the first book I've read by Wright, but I really enjoyed her writing style and authorial voice. She belongs to the Roxane Gay school of feminist scholarship that has a sense of humor but puts up with no bullshit. Beginning with the Antonine Plague (probably of smallpox) that killed between 10 and 18 million ancient Romans during the reign of Emperor Marcus Aurelius, Wright examines how societies reacted each time a mass illness raged through them.

In a predictable historical pattern, individuals have two reactions to plagues: To take advantage (often by selling bogus cures) and to genuinely try to ease suffering. There's a bit of good news in there: Namely, that there's never been a mass illness without individuals reacting with compassion and trying their best to help, even if the cause of the illness was not yet understood. For every bad reaction (like some of the crap that happened to Typhoid Mary), there were people like Father Damien (of Molokai fame) who risked their own lives in the service of others.

Some of humanity's previous plagues were caused by diseases that are curable now. Tuberculosis was the bane of the 18th and 19th centuries, for example, but can now be eliminated with antibiotics. So, too, can syphilis, although knowing this doesn't do much to help the victims of the infamous Tuskegee experiments whose lives were lost or irreparably altered by their unethical doctors withholding the cure from them. (Shame, America. Shame.)

Other plagues could still kill us today. The bubonic plague that ravaged Europe in the Middle Ages is still with us. About a dozen Americans get it every year. We could drive ourselves to anxiety thinking about the "Spanish" (actually American) flu spread by service members quartered close together to wage the Great War. Influenza is still one of our deadliest infections and still has no cure.

But worrying us about plagues that will happen in the future isn't Wright's purpose. She's more interested in documenting the ways we've always reacted when our friends, family members, neighbors, and ourselves fall ill in large numbers. Are children cared for or abandoned? Do we spread deadly misinformation, focus on what facts we can glean, or expend our energy on compassion? This book combines sociology, psychology, and medical history.

The most recent plague examined is that of polio*, which terrified Americans through the middle of the 20th century when it could be cured. Wright chose to focus on those epidemics in which the key players are historical ones. In her epilogue, she mentions the AIDS epidemic of the late 1970s and 1980s. She chose not to write about it because it's still within living memory to a much greater extent than polio. I can appreciate that decision. Having lived through the 1980s, I can understand why it's tough to be objective about the lack of government response to the deaths of so many innocent people. (And all victims of disease are innocent - microbes are not a moral judgment).

If you read this book, you'll learn some interesting historical facts. You'll be impressed by the heroes of history who did their best to respond with compassionate care. You'll be saddened by a few less-than-desirable aspects of human behavior. And hopefully, if you ever find yourself caught in a plague, you'll be a little bit wiser. I'll do my best to try to err on the side of compassion. While also remembering that personal protective gear exists.

I borrowed this audiobook from my local library using the Libby app and was not obligated in any way to review it.

*Upon reflection, the encephalitis lethargica epidemic may come after the polio chapter.
Posted by Erin O'Riordan at 7:37 PM 3 comments:

'A Stir of Echoes' by Richard Matheson - Mid-Century Spooky Story

Stir of Echoes by Richard Matheson

(Mild spoilers, not of major plot points.) Interesting mid-century artifact. The narrator, Tom, is mildly paternalistic and condescending to every woman in his life, including his pregnant wife Anne. That gets annoying, but it's somewhat alleviated by the facts that a) he genuinely loves her and the children and b) nothing horrible happens to her in the furtherance of the plot.

The supernatural element of the story is less of the monster variety that went into the writing of I Am Legend (which I haven't read; I've only seen the film) and subsequently inspired George Romero to make Night of the Living Dead. It's more of the atmospheric/eerie/parapsychology type.

And it's nothing like the 1999 movie that starred Kevin Bacon. The movie took out the casual misogyny and replaced with sexual violence; there isn't a hint of sexual violence in the book. Reading the book does, however, make certain points in the movie make a lot more sense. They're orphaned elements from the novel without the through line.

This book came out in 1958. The Diagnostic and Statistics Manual (DSM) I, modern psychology's text for diagnosing mental illnesses, first appeared in 1952, and psychology was a bit of a "trend" in the '50s. In 1954, The Bad Seed explored psychopathy, and the word "psycho" was cemented in the public mind by 1959 when Robert Bloch released Psycho.

A Stir of Echoes touches on abnormal psychology with one character, but it's more of a fanciful "what if our minds have hidden psychic powers?" novel. It's less muddled and more clear-cut than in the movie, especially when it comes to Tom and Anne's 4-year-old, Richard. What's happening to Richard in the movie doesn't really resemble his little bit of involvement in the book.

Bottom line: Someone should write an updated script based on the book, without the implication that femaleness itself is a mild mental illness.

I borrowed this audiobook from my local library using the Libby app and was not obligated in any way to review it. Richard Matheson doesn't care because he died in 2013. I got the idea to borrow it from listening to Podcast Like It's 1999.
Posted by Erin O'Riordan at 9:03 PM 1 comment:

'Ten Days in a Mad-House' by Nellie Bly

Ten Days in a Mad-House by Nellie Bly

The saddest and scariest part of this journalistic account from the late 19th century (originally published in 1887) is how easy it was for the reporter to be declared "incurable." No one even remotely tried to "cure" her.

In fact, of the women she encountered in the "mad-house," few of them would be considered mentally ill by today's diagnostic standards. No doubt some of them were depressed, but others were grieving. Some of them were just poor. One woman couldn't be evaluated at all because she didn't speak English and none of the four doctors could speak German. 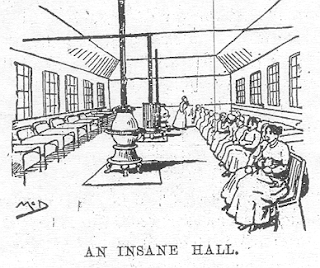 It was shockingly easy for a woman to be locked away forever, mistreated, and deemed incurable just because she had unfortunate life circumstances happen to her.

I listened to this LibriVox audiobook - free public domain books read by volunteers - using the Podcoin app on my phone. Podcoin pays you tiny amounts of money to listen to podcasts and Librivox books. You can donate your pennies to charities or save them up to exchange for gift cards.

To get 300 free podcoins when you sign up, use the referral code NERDY. This benefits the Nerdy Bitches podcast. I'm not affiliated with it in any way other than being a fan. Past episodes have covered Harry Potter books, the Divergent series, Ready Player One, geek crushes, Pride and Prejudice and Zombies, an entire month of Batman podcasts, and much, much more.

Some of the many LibriVox books you can listen to on Podcoin include:

'Natural Causes: An Epidemic of Wellness, the Certainty of Dying, and Killing Ourselves to Live Longer' #nonfiction

Natural Causes: An Epidemic of Wellness, the Certainty of Dying, and Killing Ourselves to Live Longer by Barbara Ehrenreich

Something about Barbara Ehrenreich's prose makes me gobble these books down like a snack-sized bag of potato chips.

This book can stand alone, or it could be thought of as a follow-up to her book Bright-Sided: How the Relentless Promotion of Positive Thinking Has Undermined America. Reaching back into her training as a cellular biologist, Ehrenreich touches on the "wellness" industry in the U.S., as opposed to the health care system. She mentions Gwyneth Paltrow and Goop, but the point of this book is not to take down the "wellness" industry, no matter how woo-woo some of its propositions may be.

Rather, it is to examine the ways in which human beings trick ourselves into thinking our actions can have an effect on how long we'll live and how healthy we'll be in old age. The book focuses on Americans, not because Americans are necessarily more deluded and unhealthy than other peoples, but more to narrow the scope of her investigation. Ehrenreich systematically debunks the things we think we know about healthy aging, such as the necessity of taking calcium supplements to build stronger bodies to ward off osteoporosis. She looks at the way we medicalize aging when some "symptoms" of aging may be an inevitable part of being human.

Death is also discussed in this book. I learned that among the many tiny creatures that may feast on me after I die, there may be butterflies. I find this oddly comforting; I don't think I'll mind being food for butterflies. It also reminds me of an old line from The Simpsons: "Nobody ever suspects the butterfly."

I checked out this book from my local library using the Libby app and was not obligated to review it in any way.
Posted by Erin O'Riordan at 12:00 AM 1 comment: