Bummer Summer Part I: Awful Things That Happened in August

As I mentioned back in June, I've been working on a time-based project. A sort of almanac, if you will. That project was well underway as I sat in the Kan-Kan Cinema and Brasserie the other day, watching Jordan Peele's Nope. 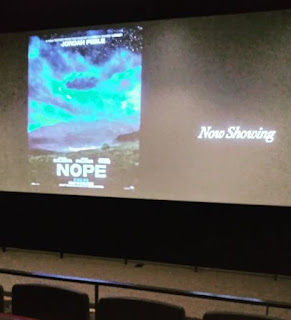 I'm not going to spoil anything major about the movie, but here's a minor spoiler that occurs in the first few minutes: Weird things fall out of the sky.

This reminded me of a particular genre of reading I enjoyed as a young adult: Collections of short, weird, allegedly true paranormal happenings. These books would collect ghost stories beside tales of strange happenings like alleged cases of spontaneous human combustion, reincarnation, and rains of weird things such as frogs.

It occurred to me that part of Jordan Peele's writing process was collecting bits of news, little ripples of anxiety that run through our American culture, and weaving them together into a story. This reminded me of my almanac project, which isn't specifically focused on cultural anxieties or weird happenings, but does mention some of them incidentally. For example, I was alive on September 11, 2001, and I've written about it; some of that writing made its way into my first almanac draft/work-in-progress.

I don't want the entire almanac to be a bummer. But this gave me an idea: What if I wrote a separate document, a companion almanac, a slimmer volume that was focused on the bummer parts of history and American culture?

This is the first little peek at what I'm tentatively--very tentatively--calling Erin O’Riordan’s Almanac of Bad Days. I'm me, so it's still a bit literary-focused.

August 2, 1973: Approximately 50 people are killed when the Summerland indoor amusement park catches fire. The building’s ceiling is constructed using a transparent acrylic material, which melts, raining burning-hot liquid acrylic down on the victims of the fire.

August 2, 1997: William S. Burroughs dies, having had a heart attack the previous day.

August 7, 2016: 10-year-old son Caleb Schwab is killed while riding the Verrückt water raft ride at Schlitterbahn Water Park in Kansas City, Kansas. The tallest such ride in the world at the time, the ride had a screen over the top, held in place with a series of metal support rings, to keep guests from accidentally flying off the ride in the event that the raft should become airborn. Caleb, who was riding on the front of a raft with two unrelated women riding on the back, struck the metal support ring and was decapitated when his raft became airborne.

August 10, 1978: Three teenage girls, all members of the Ulrich family, are killed in an automobile accident while riding in a Ford Pinto. The state of Indiana charges the Ford Motor Company with homicide, claiming that the company was aware of manufacturing defects that made the vehicle more likely to cause death in the event of certain types of accidents. Ford is found not guilty.

August 12, 1982: Japan Airlines Flight 123 crashes into a mountain after the pilots lose the ability to steer the plane. Of the 509 passengers and 15 crew members, only three passengers and one crew member survive. Rescue operations are delayed due to darkness and mountainous terrain, which means many people who may have initially had non-fatal injuries died of exposure, blood loss, and other conditions.

August 13, 1521: Hernán Cortés and his small army of Spanish conquistadores conquer the Aztec capital of Tenochtitlán after an extended siege that began in 1519.

August 13, 1944: Lucien Carr, friend of Jack Kerouac and William S. Burroughs, stabs and kills his acquaintance David Kammerer. Carr will serve two years in prison for manslaughter, then go on to father children who include novelist Caleb Carr.

August 17, 1966: English race car driver Ken Miles is killed when the Ford Mk IV he is test-driving crashes at over 200 miles per hour.

August 26, 2001: Tit and I got out of bed this morning and turned on the news to hear that the singer/dancer/actor Aaliyah had perished in a plane crash in the Bahamas. Born in 1979, she was only 22 years old.

August 27, 1883: Mount Krakatau (Anglicized as Krakatoa), which had begun to erupt on the 20th of May, intensifies in seismic activity with an eruption that destroys more than two-thirds of its island. The eruption is one of the loudest sounds ever heard by human ears, with the explosion being heard 4,800 miles away from the Indonesian site of the volcano. Pyroclastic flows, ash expelled into the atmosphere, and resulting tsunamis are estimated to have killed more than 36,400 people. Only the 1815 Mount Tambora explosion is thought to have been deadlier.

Did you know that in addition to writing, I also draw and make old-fashioned, analog collage art? I drew this Little Golden Book in 1998.

The image makes a cute design for a baby onesie.

This old-fashioned, cut-and-paste paper collage, also created in the '90s, decorates the inside of one of my diaries.

Another cut-and-paste collage from an old diary represents my favorite color.

I drew Madonna (Ciccone) in the style of a Fernando Botero Madonna.

This collage represents a more traditional Madonna, although with the addition of a few beauty products as a frame.
I've even designed a few dresses.
Comment with the name of your Pinterest profile so I can see some of your favorite pins.
Posted by Erin O'Riordan at 12:00 AM No comments: