'Night Shift' Wraps the Midnight, Texas Series Up In a Neat Little Package 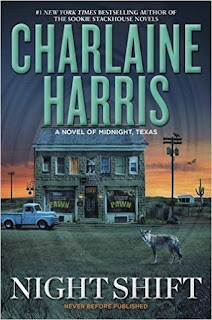 Charlaine Harris wraps up her Midnight, Texas trilogy this year with Night Shift. Since I can no longer look forward to new seasons of True Blood in the summer, I get my supernatural fix from the annual May release of these books. (What will I do next year?)

No, Charlaine Harris is not perfect. Yes, her characters are subject to an old-fashioned double standard that punishes women when it comes to sexuality. This volume contains blatant sexuality-shaming of Fiji Cavanaugh's sister Kiki. I'd hoped maybe Harris had learned, through public criticism, not to write sexism and racism into her novels, but she's still a work in progress.

That doesn't mean I didn't enjoy reading these books. The third book in the series was as hard for me to put down as the other two.

Hints have been dropped all along that Manfred, the novel's psychic, is something other than a plain ol' human being. In this volume, we finally discover what his non-human lineage is. It's demon. The new guy who took over running Midnight's gas station turns out to be Manfred's biological grandfather, and said grandfather had a demon father. Manfred's mother was a quarter-demon, so Manfred is an eighth-demon. No wonder his psychic powers aren't just a cheap trick.

(I know Manfred is a carryover from another Charlaine Harris series, but it's not one that I've read.)

Other satisfying developments happen on the romance front. For one thing, we learn that "hybrid" vampire Lemuel and bow-wielding assassin Olivia Charity are now husband and wife. They got the Rev (a tiger shapeshifter, as we learned in Day Shift) to marry them so that if Olivia were killed in the line of duty, Lemuel could inherit her share of the family fortune.

To be honest, though, they probably would have gotten married anyway. They genuinely love each other, and Lemuel can be surprisingly old-fashioned when it comes to the ways to physical love.

Speaking of physical love, we learn a slightly surprising thing about Fiji: she's a virgin. That's not too terribly unusual, given that she lives in a small town with only a handful of eligible bachelors, and she's only - what, 25? Maybe 26 years old? Not that there's anything wrong with being a virgin, or with not being a virgin. It's just that Fiji is interested in pursuing romantic and sexual relationships, but she just hasn't had luck in that department...yet.

Well, that all changes by the end of this novel, in an example of Deus Sex Machina, sub-trope Mate or Die. As the town's virgin witch, Fiji must engage in a public sex ritual at the Midnight Crossroad in order to avert the rising of Manfred's demon grandfather. For several chapters, it's left open who will volunteer to be her partner in the hieros gamos.

But I don't think too many people will be surprised to discover that Fiji's longtime crush, Bobo Winthrop, returns her amorous feelings. And then some. Their ritual mating is oddly sweet; it plays out like well-written fan fiction.

A Caution: There is a major "squick" in this novel re: details of how Olivia was abused as a child. If you're sensitive to depictions of child abuse, you may want to skip this volume.

Not too long ago, NBC announced it would premiere Midnight, Texas as a series this coming autumn. I'm likely to watch it, but reluctantly so. I like my zaftig heroines to be played by curvy actresses. Parisa Fitz-Henley, cast as Fiji, seems too thin for the part. No offense to thin women - I just don't think Fitz-Henley looks at all like the Fiji Cavanaugh in my head. If she's not at least a size 10, she's not MY Fiji.

I checked this book out from my local library and was not obligated in any way to review it. This review represents my own honest opinion.
Posted by Erin O'Riordan at 10:21 PM 1 comment:

I didn't get the feeling that this was an actual novel so much as a novella or long short story stretched out by lots of short chapters and blank spaces by an enterprising publisher.

Still, it was an enjoyable read with a relatable heroine. Rebecca is 60, and it's always nice when fiction shows us older adult protagonists who continue to grow, learn, and change. Being a romantic at heart, I was satisfied with the love story - but you certainly don't have to be a romance reader to appreciate the low-key pleasures of this book.

I purchased this book with my own funds from a library used media sale. I was not obligated in any way to review it. It was on my Grandma's TBR list, so she read it and then passed it along to me.
Posted by Erin O'Riordan at 10:10 AM 2 comments:

'The May Queen Murders' by Sarah Jude 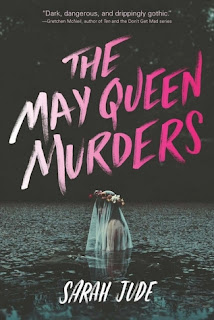 The May Queen Murders by Sarah Jude

This is the book for you if you like:

- Young adult books that deal with mature themes, including death and sexuality
- LOTS of plot twists
- Books with a dark, tense, and moody atmosphere
- Authors who can capture the feeling of first love
- Latina heroines
- Tense, suspenseful scenes
- Books set in the Ozark Mountains
- Stories set in modern times, but in settings in which the characters lead old-fashioned lifestyles

This novel is compulsively readable from the first page. While it hooks the reader from the start, the tension builds slowly but steadily to a hectic, harrowing finale. This is a well-crafted example of the mystery genre for young adults.

I received this book through the Amazon Vine program in exchange for a fair and honest review.

You Say Witch Like It's a Bad Thing: Thea by George Saoulidis. $2.99 from Smashwords.com
When a teenage witch goes to a new school, she finds herself in an unfamiliar place with no friends. But will she manage to befriend some of the girls in class, when she’s anxious about revealing herself to others, when she’s still coughing up water from the last time she trusted people and when her new friends want to try her magick on a tennis match?
Posted by Erin O'Riordan at 8:05 PM 2 comments: