SOC Sunday: Home Is Where I Want to Be 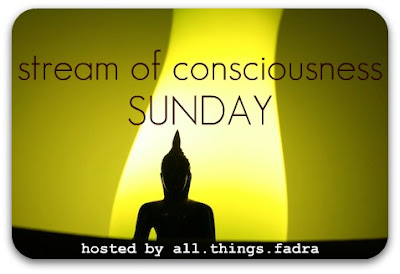 Here are the rules…

*Set a timer and write for 5 minutes.
*Write an intro to the post if you want but don’t edit the post. No proofreading or spellchecking. This is writing in the raw.
*Publish it somewhere. Anywhere. The back door to your blog if you want. But make it accessible.
*Add the Stream of Consciousness Sunday badge to your post.
*Link up your post at AllThingsFadra.
*Visit your fellow bloggers and show some love.

Today’s (Optional) Writing Prompt: How do you feel about where you live?

This may sound like a cliche, but it's really true: When I got back from Europe and went through customs in New York, I thought, "I'm home."

But I don't live in New York.

Another flight took me from JFK airport to Chicago's O'Hare. As soon as I saw the Chicago skyline, I thought, "Now I'm really home."

But I don't live in Chicago, either.

Home is a moving target. The USA is my home, the Midwest is my home, my home state is my home, and so is my county, my city, my neighborhood.

I love where I live (even if I don't like to share publicly my home city and state. Chicago-ish area, suffice it to say). My 99-year-old house is on a curve of the river, so we have river views from just about every room. If we're quiet enough, we can hear the waterfall.

(The above photo was taken in the park in which my hubby and I got married. The rock garden was built by the Works Progress Administration in the 1930s.)

I heard on the local news this morning that the city where I was born is celebrating a sad anniversary today. Ten years ago, a man who'd been fired from a factory went on a shooting rampage in the factory, killing several people before ultimately killing himself. My dad was a police sergeant at the time. Sadly, there had been a similar shooting in a nearby town earlier in that same year. The officers in that earlier shooting had waiting before entering, but my dad and his colleagues decided they wouldn't let that happen again. My dad was the actual first one in the building. He started to triage the wounded even though he didn't know if the shooter was still in the building or not. (He wasn't. He'd started to lead the county police on a high speed chase.) The decision to go in and start performing CPR on the wounded and clear the building for EMS to come in saved several lives.

I thought then, and I still think, that what my dad and the other officers did that day is the very definition of bravery. I'm not always brave, but I like to think there's some of that DNA in me somewhere, and if I ever need it, I hope it will rise to the surface.
Posted by Erin O'Riordan at 8:11 AM

The feeling I got from your words about where you live is exactly how I want to feel.

I love this post. I started in one place and ended in another - for both I said, "Wow."

"Home is a moving target."

The other part of me-- the one that isn't already inexplicably and accidentally tied into my life-- longs for this feeling.

So thanks for the peek!

Lately with all of our moves and life and stuff - i wonder where a home, as in country, state, town would actually be ...

I feel what you are saying....I'm not sure where home is for me either...it seems to move and not sure I know what it feels like to be home. Not 100% sure we are on the same level there, but maybe....