'Fall and Rise: The Story of 9/11' by Mitchell Zuckoff

Forget the conspiracy theories that have cropped up in the past 18 years. If you want to know what happened on September 11, 2001, stick to factual, journalistic reports like this one. Zuckoff cites extensive notes in his sources, including firsthand interviews with survivors, so this isn't just some person with a YouTube channel talking out of their...imagination. 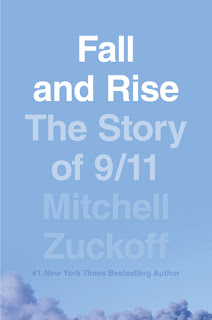 This is a hard read. It was an awful, brutal, cruel act of terrorism, and this narrative pulls no punches when it comes to graphic descriptions. Content warning for descriptions of violence and bodily injury; sensitive readers may not be able to handle some of the more vivid chapters. (One of the really graphic ones relating to the Shanksville, Pennsylvania plane crash was mentioned in the Washington Post review of this book. If you could handle that review, you'll probably be okay.)

This book does two important things. One, it personalizes the unthinkable tragedy, bringing it back down to human scale. Two, it ends on a hopeful note, reminding us that survivors continue to survive and thrive despite their horrific losses and injuries.

I don't know why I'm drawn to reading such sad things. I guess it's a "hope for the best but prepare for the worst" thing. But I do know that an American is more likely to be killed by a bee sting than by a terrorist. The reality is that we're actually safer than we've ever been. So read this history, but don't get depressed.

I borrowed this audio book from my local library using the Libby app. I wasn't obligated to review it in any way.
Posted by Erin O'Riordan at 6:56 PM 2 comments:

'The Book That Changed America: How Darwin's Theory of Evolution Ignited a Nation'

Pro of this book: It allowed me to peek inside the intellectual lives of many of the American thinkers I studied in American Literature class many years ago: Bronson Alcott and his daughter Louisa May, Henry David Thoreau, Ralph Waldo Emerson, Henry Wadsworth Longfellow, et al. 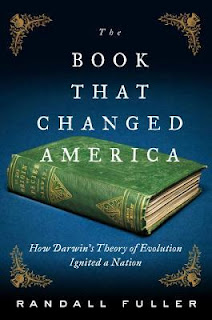 Con of this book: This is no fault of the author's, but it's disappointing to see that some of the scientifically inaccurate and misleading arguments against Charles Darwin's theory of evolution, as presented in The Origin of Species, are still around and being used by "intelligent design" advocates now. Guys, if it wasn't scientifically accurate in the mid-to-late 19th century, you definitely have no business dragging it back it up now.

I borrowed the audio version of this book from my local library using the Libby app. I was not obligated in any way to review it.
Posted by Erin O'Riordan at 8:16 PM No comments: