I'm back, and I'm very curious to hear other people's thoughts on this one, especially other writers and people in creative fields: When you listen to certain songs, do you have very specific stories you associate with them? Do you associate a song with a book, a fic, a movie, or fictional characters of some kind?

There are some of my Very Specific Associations for songs I listened to often in 2021.*

"Already Gone" by Kelly Clarkson. Remember when "The Broken Man and the Dawn" was my favorite RPF? Well, whether one does or not, that particular story has a plotline that involves a couple who's lost a child having a painful but overall rather amicable breakup. Although Clarkson famously wrote this gentle breakup song for her ex Justin "Little Sweet from the Dr. Pepper commercials" Guarini, in my mind it's about that breakup from "The Broken Man and the Dawn."

"Girl Crush" by Little Big Town. I made a whole post about this one by itself; it's one of my songs for the fictional couple Destiel. 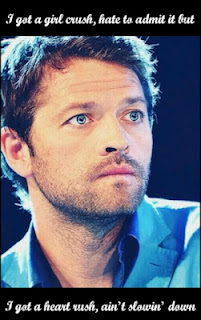 One of my other Destiel songs is the Deftones cover of Sade's "No Ordinary Love."

"Runaway Crush" by Stella Soleil. This one is both super-specific and a mishearing. The actual line in the song is, "I'm feeling the soft of your skin," but before I looked up the lyrics I always heard it as "I'm feeling the SALT of your skin." Granted, salt doesn't have a particularly nice feel (it's just grainy), but I liked to imagine ocean-dipped Mediterranean skin which, when kissed, might taste quite nice.

I rediscovered this gem of a song at roughly the same time I developed my Baron Helmut Zemo fixation. My association with Zemo and salt is this Tumblr post by a native Russian speaker. Daniel Brühl is famously multilingual; he acts in German-, Spanish-, and English-language films and also speaks Catalan and its cousin French. Apparently, though, his Russian accent is less than ideal and when Zemo has to utter the command phrase "soldat," he sounds like he's either saying "soldier" in a baby voice or asking, "Want some salt?"

Thus my runaway crush is a Sokovian war criminal. (It's ok, he's fictional.)

If you want to fall even deeper into the salty rabbit hole in my brain, you can listen to this episode of Cult or Just Weird in which a self-described alien contactee says the aliens always give him salt as a parting gift.

"Send My Love (To Your New Lover)" by Adele (Adkins). Like many people who spend too much time on Tumblr, I had a BBC Sherlock phase. I imagine this song is what Sherlock says to John when John marries Mary. 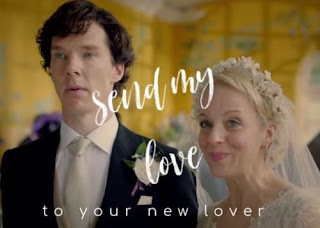 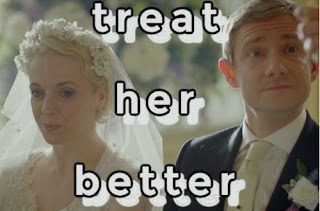 "Watching You Watch Him" by Eric Hutchinson. I mentioned this one years ago, but this song enjoyed mild popularity when I was reading Fifty Shades of Grey. Thus I experience this upbeat ode to jealousy as being from the point of view of Jose, witnessing the early stages of Anastasia and Christian's relationship.
"Water Under the Bridge" by Adele (Adkins).  In my mind, this is another Johnlock (BBC Sherlock), but this time from John's point of view, upon his learning that Sherlock was not actually dead.

*I'm trying to learn some new music for 2022. Here are a few current favorites:

Anyone, at any time, please feel free to tell me your Very Specific Song Associations. Even if you stumbled upon this post in 2032.

Posted by Erin O'Riordan at 2:38 PM No comments: