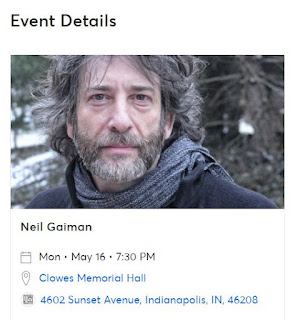 My husband and I were lucky to see Neil Gaiman do a live reading and question-and-answer session on the Butler University campus last night. Now I feel like a Victorian lady must have felt after she saw Charles Dickens on one of his American tours. (Except Neil Gaiman is an English person who lives in the United States; I don't think Dickens ever moved here.)

Mr. Gaiman began the evening by reading a short poem about reading to children, aimed at some friends in the audience whom, he knew, had their young child with them. Secondly he read us "Chivalry," a delightful short story which you may remember from LeVar Burton Reads.

Someone asked him how he came to be so obviously fascinated by myths. He said, in a deadpan tone, "When I was four, I was bitten by a radioactive myth." I suspect the sincere answer has more to do with an autobiographical story he told later about asking his parents to leave him at the local library all day, where the librarians would treat him, a child, with respect and use inter-library loans to get him almost any book he could think of.
Later he read "Click Clack the Rattle Bag," a funny/scary horror story, and then a short story that was sort of a sequel to "Chivalry," about the woman who releases the genie from the silver lamp, but doesn't want any of his offered three wishes.
Neil Gaiman talked about his children a lot. He was quite adamant that he can't be happy unless they're happy. He especially mentioned Holly, because she was the inspiration for Coraline, and Maddy, but he also mentioned the time Michael became frustrated with him because, Michael said, "You make things up." He didn't mention Anthony by name, but again I stress, he can't be happy unless all of his children are happy.
He spoke lovingly of his Good Omens co-creator Terry Pratchett, who apparently was a wonderful friend to talk to over the phone, a bit prone to calling out of the blue. He also spoke lovingly of Stephen King, relaying an incident in which the King family offered to take Mr. Gaiman to dinner after he finished his 4 p.m. book signing. The Kings sat impatiently in their car from 7:30 to 8:30, still waiting for Gaiman to finish signing things, when Joe Hill (approximately 22 years old at the time) came in sheepishly to let him know they were going back to their hotel, where Mr. Gaiman was welcome to join them after the signing. Which he did, at 10 p.m. It was a very long book signing line.
Neil Gaiman mentioned the bucket list he wrote when he was around 10 years old, which included writing an original musical, which he still wants to do. Some of his works have been adapted for the stage, but he hasn't written anything original specifically for musical purposes yet. I had to chuckle, because Tit Elingtin and I had seen Something Rotten! at Footlite Musicals on Sunday. The plot involves an Elizabethan soothsayer predicting that musicals will be the next big thing in theater. 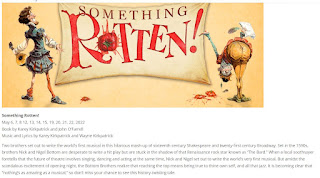 The presentation ended with two poems, both written collaboratively with input from the Twitterverse. The first was about how to stay warm, and was part of a project aimed at collecting money for some the world's estimated 65 million refugees, from Afghanistan and other conflict zones. The current number of refugees and internally displaced persons in the world is believed to be the highest it's been since the end of World War II.
The last poem was written expressly to be part of an unnamed person's full-back tattoo. Mr. Gaiman agreed to take part in this project not imagining that the illustrated who provided the art would also say yes to the project...but he did.
Lastly, my beloved Tit Elingtin braved the book line to get me several pre-signed copies of Neil Gaiman books. They'll be a prized part of my book collection. I'm sure they were all signed with his favorite writing instrument, the fountain pen.
Posted by Erin O'Riordan at 11:08 AM No comments: