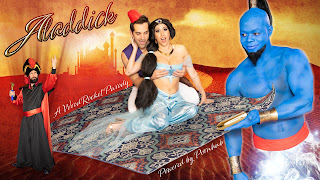 
When Princess Jizzman goes looking for a prince to satisfy her royal genitals, she comes across Aladdick over and over again. With the help of his Vagenie and flying carpet, he disguises himself as Prince All D. But will evil Jafuck, screw him over? Find out in Aladdick.

Barracoon: The Story of the Last "Black Cargo" by Zora Neale Hurston

I listened to this short audiobook; it's about a 4-hour listen. This is nonfiction, so be prepared for the very tragic details of the life of Cudjo Lewis. His village was raided by the Dahomey people, his parents were killed, and he was captured to be sold by the Portuguese into slavery. All of those things would be terrible enough for one lifetime, but Cudjo continued to encounter myriad tragedies after the Union soldiers came and told him he wasn't a slave anymore. Very sad.

Cudjo Lewis was a real survivor, though. He hung in there long enough to tell his tale to the brilliant Zora Neale Hurston, a pioneer of recording authentic African-American folklore. Her recording of Lewis's tale is believed to be historically accurate to a high degree, and she also relates it in a literary style that makes it incredibly compelling. But - still very tragic.

If you are an African-American who's descended from enslaved Africans, you may have to consider whether you really want to hear the gruesome details. This is not a lighthearted or easy read. Definitely all white Americans should read or listen to this book, because we should have our eyes fulled opened about what our ancestors caused.

An appendix to this book is a collection of Cudjo's fictional folk tales, which I highly recommend for anyone who's interested in folklore.

I checked this book out from my local library using the Libby app and I was not obligated in any way to review it.
Posted by Erin O'Riordan at 12:28 PM No comments:

All the Wrong Questions #4: Why Is This Night Different From All Other Nights?

Why Is This Night Different from All Other Nights? by Lemony Snicket

I'm glad I read this series but also sad to see it end. I thoroughly enjoyed it but was saddened when one of my favorite (relatively minor) characters died. I hope Lemony Snicket, a.k.a. Daniel Handler, returns to middle grade writing again some day.

Favorite quote from this book: “Villainy can win against one library, but not against an organization of readers.”

I purchased this book with my own funds from my local brick-and-mortar Barnes and Noble and I was not obligated in any way to review it.

Email ThisBlogThis!Share to TwitterShare to FacebookShare to Pinterest
Labels: All the Wrong Questions, Lemony Snicket, Why Is This Night Different From All Other Nights?

A Secret Rage by Charlaine Harris

Hello, I'm not dead. I did kind of forget that I had a book blog, though! But I have been reading. Here's a brief review of the novel I finished today.

This mystery in which the perpetrator of the murder is also guilty of a number of sexual assaults has characters who express some very problematic ideas about sexual assault in general. Even a generally skillful writer, as I believe Charlaine Harris is, must tread carefully around these issues, and this stand-alone mystery left something of a bad taste in my mouth.

Perhaps I was a bit biased because I'm a Northerner and the Southern-born-and-raised character refers to her New Yorker neighbors as sounding like a bunch of squawking bluejays. (We have bluejays in the North, Charlaine - I know exactly what that sounds like.)

I also felt the writing was a bit more unpolished and clunky than I'm used to in such favorite series as the Southern Vampire Mysteries and Midnight, Texas.

I purchased this book with my own funds from Red Dog Books and was not obligated in any way to review it.
Posted by Erin O'Riordan at 2:11 PM 1 comment: