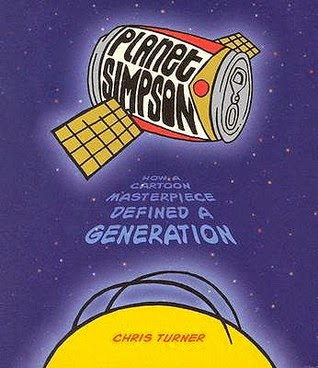 Planet Simpson: How a Cartoon Masterpiece Documented an Era and Defined a Generation by Chris Turner

I got a tremendous amount of pleasure from listening to this audiobook - but then, I've been a fan of the Simpson clan since the days of the Tracey Ullman shorts. Turner's writing is humorous and insightful. He does show a bit of bias, however, and I hope you won't think it too, as the French say, Lisa-esque of me to point out that Turner:

- Uses the word "mankind" when, clearly, he means "humankind"
- Uses the word "coed" when, clearly, he means "student" - an anachronism which, by the way, makes a person sound as if he or she is as old as Mr. Burns
- Assumes the reader finds Lisa shrill/strident/obnoxious while at the same time admitting she is the closest thing to the voice of the (almost exclusively male) writers
- Throws out the suggestion that Marge Simpson is "anti-feminist" because she's a homemaker, when in reality feminism is all about empowering women to have choices and to be homemakers if they choose to do so.

I could do without the casual sexism and anti-feminist assumptions. (And I am so sick of saying so. My queendom for an unabashedly feminist male author in the mainstream media!)

That said, Turner's analysis of the major characters and themes of the long-running cartoon series seem accurate. His overall thesis is useful in understanding one of the wittiest things on television, programming which has consistently entertained me for over 20 years now.

I purchased this audiobook with my own funds and was not obligated to listen to or review it in any way.
Posted by Erin O'Riordan at 11:32 PM No comments:

Email ThisBlogThis!Share to TwitterShare to FacebookShare to Pinterest
Labels: Chris Turner, nonfiction, Planet Simpson: How a Cartoon Masterpiece Documented an Era and Defined a Generation, The Simpsons

(Mom, since you haven't read the book yet, do not read my review. It may contain spoilers and unduly influence your opinion.)

(Heads up: I'm going to use "they" as a singular, gender-neutral pronoun.) I enjoyed Abraham Lincoln: Vampire Hunter, but this sequel much less so. I don't understand the plot. What is A. Grander VIII's motivation for doing all the awful things they do? I can't enthusiastically endorse a book in which the villain's actions are so nonsensical.

Seth Grahame-Smith's consistent insensitivity to the female half of the species continues to baffle and irk me. It's not only his refusal to join us in the 21st century and, in the voices of his narrators, use the inclusive word "humankind" rather than the outdated, gender-biased "mankind." On the "Facts" page that proceeds the title page in this first edition, in the voice of his narrator - not, mind you, a character from an earlier century - Grahame-Smith uses "mankind" twice in three paragraphs.

It's also a return on Grahame-Smith's part to the "I used to love her, but I had to kill her" theme I so detested in his screenplay of the Tim Burton/Johnny Depp/Helena Bonham Carter travesty Dark Shadows. "But she was a witch!" and "But she was an evil vampire!" may be acceptable excuses for violence against fictional women, but such scenes are not the least bit entertaining in a world where real violence against real women is a disturbing constant.

I really enjoyed Pride and Prejudice and Zombies, but Seth Grahame-Smith disappoints me as often as he impresses me. I did like the footnote in which Emily Dickinson's reclusiveness is explained by her being a lesbian or bisexual/pansexual vampire. Alas, the women in Grahame-Smith's fiction since Elizabeth Bennet have all been footnotes, plot devices to be used at the service of the male characters' plotlines and then violently disposed of when no longer necessary. If Grahame-Smith's next book is titled Emily Dickinson: Pansexual Vampire, I'll probably read it. Otherwise, I think I'll be done with his casually sexist, anachronistic ass. I read for fun, not to be made to feel as if my entire gender is disposable.

Judging from his photo on the inside back cover, Seth Grahame-Smith is a fairly good-looking guy. He will not, however, be one of my Hanukkah Hotties, because he is a not-very-nice Jewish boy.

I checked this book out from my local library and was not obligated to read or review it any way.
Posted by Erin O'Riordan at 6:02 PM 2 comments:

A Fantastic Voyage: 'A Wind in the Door' by Madeleine L'Engle (Time Quintet #2) 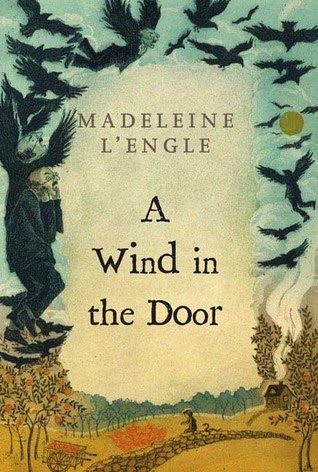 A Wind in the Door is the second book in Madeleine L'Engle's Time Quintet. It continues the story of Meg and Charles Wallace Murry, begun in A Wrinkle in Time. AWIT was first published in 1962, and AWITD first appeared in 1973. I listened to this book on CD, performed by Jennifer Ehle (of Pride and Prejudice fame).

Titular Allusion: The unusual title comes from Le Morte D'Arthur. Sir Thomas Malory's 1485 compilation of tales of Arthurian legend is written in English even older and stranger than Shakespeare and the King James Bible. (The KJV is currently 404 years old, but Le Morte D'Arthur is more than 100 years older.) 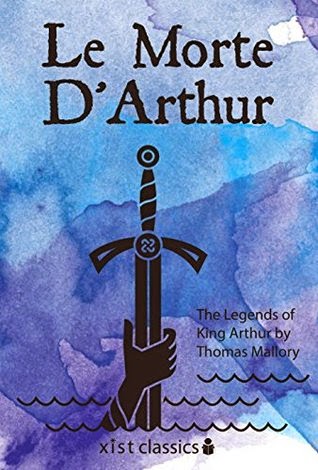 In this volume, Charles Wallace - age 6 - is terribly ill. It's bad enough he's so much smarter than the other first graders and they beat him up because of his unusual-for-his-age interest in mitochondria and farandolae. (L'Engle invented farandolae, organisms so tiny they live inside mitochondria, and named them after a type of European folk dance.) Even worse, his mother - who is a microbiologist - suspects something is wrong with Charles Wallace's mitochondria. He's pale, exhausted, and beginning to have trouble breathing.

But is he hallucinating? Meg suspects her youngest brother may be when he claims to have seen dragons in the twins' vegetable garden. He's not exactly wrong, it turns out. What he mistakes for "a drive of dragons" is actually Proginoskes, a cherubim. Yes, "cherubim" is a plural noun (masculine plural, to be exact, since Hebrew is a gendered language), but Proginoskes is "practically plural." He only materializes for the sake of the humans, but in his material form he appears as a swirl of wings, eyes, smoke, and flame. 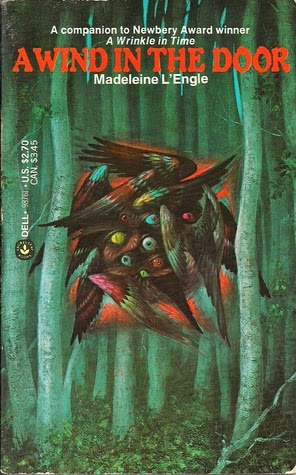 According to the Catholic Encyclopedia, the word "cherubim" is borrowed from the Assyrian word for "to be near." It implies the cherubim are the order of angels who are near the throne of God - God's "bodyguards," one might say. L'Engle's description of a cherubim is based, in part, on the tenth chapter of the Biblical book of Ezekiel. She leaves out the strange wheels-within-wheels the prophet saw, and the prophet's description of the angels as having four beastly faces.

According to Wikipedia, Proginoskes is Greek for "foreknowledge."

Proginoskes, Meg, and Meg's sort-of boyfriend/friend who is a boy Calvin O'Keefe are cosmically selected to be members of a class that must pass three tests and intervene to save Charles Wallace -and, possibly, the universe. To do so, they must go inside one of Charles Wallace's mitochondria and meet one of the farandola. The farandola, called Sporos, is much chagrined to be partnered with Calvin. Sporos considers Earthlings beneath him.

His pride is one of the reasons why Sporos is vulnerable to attack by the Echthroi (Greek for "enemy"). These awful creatures seek to destroy, or un-Name, all of creation. Proginoskes calls them fallen angels.

Fallen angels is just another name for demons. In this novel, they even possess Mr. Jenkins, who used to be the principal of Meg's high school and is now the principal of Charles Wallace's grade school. Calvin being called upon to fight demons is all the more reason for young!Jared Padalecki to portray him, in my imagination.

I can't help it: I'm in love with the slow, innocent way Meg Murry and Calvin O'Keefe are falling in love. It reminds me of how [SPOILER ALERT] Lyra and Will fall in love in The Amber Spyglass. BUT I'm certain Calvin and Meg have a much, much happier ending. I mean, I already know that in the third book, A Swiftly Tilting Planet, they're married and she's expecting their first child. I should add that the third book is set 10 years after A Wind in the Door. 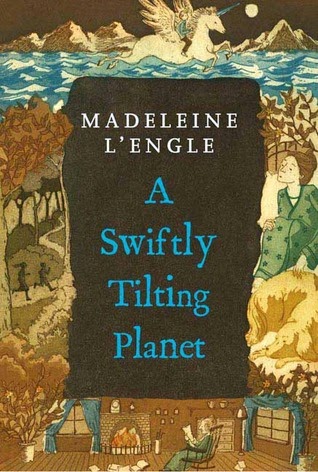 I enjoyed this book much, much more than I thought I would. Now I'm excited to read the next book. I wish my library had it on CD, but it only has it on tape. I do happen to own the paperback, though.

Know who else is a cherubim? Castiel (whose name means "shield of God"). When he's not using the body of Jimmy Novak as a vessel, I imagine, Castiel also looks like a drive of dragons, a great throbbing cloud of fire and flapping wings and winking eyes. As Meg Murry learns, cherubim are inherently lovable. It's no wonder Dean Winchester is so strongly bonded to Cas.

Posted by Erin O'Riordan at 9:49 PM No comments: