I saw The Twilight Saga: Breaking Dawn Pt. 1 earlier today. Be prepared for spoilers if you haven't read the book/seen the movie yet.

Everyone seems to either love this series or hate it, but I love it. I wasn't so into the first third of Stephenie Meyer's first novel, but by the end I was Team Edward, and I devoured the last three books in huge chunks. I think I read Bree Tanner the first week it was out. I've been waiting to see the fourth movie brought to the big screen since - forever, it seems.

My verdict is this: see it twice. See it once to enjoy the story and then once again just to take in the visuals. Director Bill Condon has made a lovely spectacle of Meyer's fourth novel - and how could he not? What could be more visually striking than a vampire wedding, glamorous with sinister undertones?

Bella's dress is gorgeous, with a criss-cross pattern in the front and an impossibly delicate gauzy fabric holding the pearl buttons in place in the back. Equally well-done was Bella's eye makeup, a blend of smoky colors. I'd award it Second Best Eye Makeup in a Vampire Series, because frankly I still can't get over how True Blood's makeup artist does Jessica's eyes. I love Kristen Stewart's chestnut Bella hair color, but you have to admit, Deborah Ann Woll's "Jessica red" is very striking. 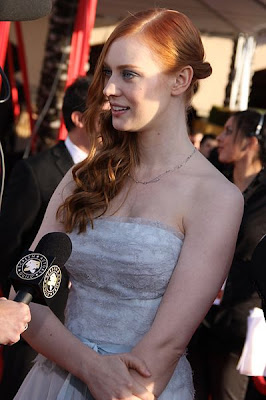 The best hair of Breaking Dawn Part 1 belongs to Taylor Lautner as Jacob and Julia Jones as Leah. Their characters go through a lot of emotional pain and suffering in this installment, but it never dulls the luster of their thick, perfectly straight, blue-black hair. They must have either an indigenous beauty secret or a werewolf one.

P.S. Taylor Lautner, I predict, will play Tane in the movie version of Beauty Queens.

The eyes have Bella, but the best-looking lips (other than Robert Pattinson's, of course) in the wedding scene belong to Bella's Forks High classmate Angela, played by Christian Serratos. 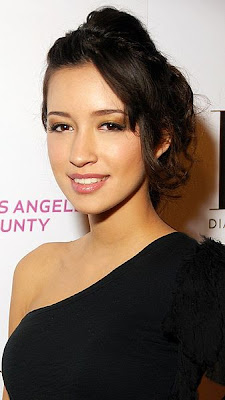 Sarah Clarke, as Esme, deserves an award for her mother-of-the-groom dress. The combination of platinum sequins and plum accents neither washed out her pale skin nor made her look too matronly.
It makes sense: literary Esmes are well-known for their fashion sense. Consider only Esme Squalor of A Series of Unfortunate Events, with her stiletto heels that were, literally, stilettos.

The Most Reformed Character award surely goes to Rosalie, as played by Nikki Reed. Rosalie pissed me off in New Moon. Yet, as soon as I saw her ferocity in guarding pregnant Bella, she won me over. What an ode to sisterhood! Rosalie is like a feminist vampire super-shero, avenging sexual assaults and standing up to fight for Bella's reproductive freedom. 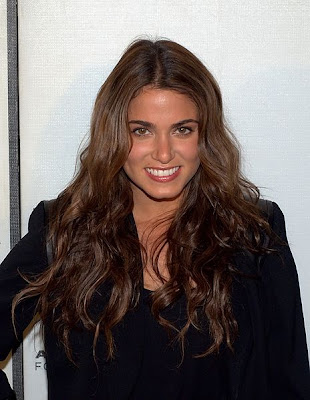 That should totally be a spin-off comic book series. Somebody run that idea by Stephenie Meyer, please. Said comic book should contain lots of gratuitous shirtless Emmett. (Why not? Boys always put girls with giant boobs in their comic books.) 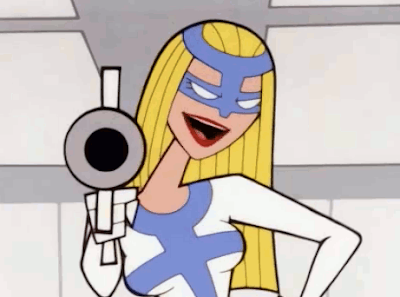 Speaking of style...Check out the couture collection - and daily deals - for men, women, children and the home at MYHABIT.
Posted by Erin O'Riordan at 10:56 PM

I haven't seen it yet but this was fun. I'm dyyying to see it and will do next week with my sister-in-law who is seeing it twice for me (and because she ?Luurrvves Edward no doubt).

Yea I'm not into the whole OMGTWILIGHTWEEVAMPIES!! & I refuse to watch or read them (I loves mah zombies) but from what I could see from the commercial for the movie, she was very pretty in her wedding dress. I would like to see the movie just to see how the baby vampire rips her apart and kills her (supposedly... that's what my friend told me anyway). Yea, I'm a little odd... BLOOD & GUTS BABY!!

The birthing scene is actually very tasteful on film. It's much more graphic in the book.