The latest special anthology from eXcessica Publishing is titled Strange Love, and you can get it now for $3.99.

The Official Blurb: This world is full of the strange and unusual, from shapeshifters to anthropomorphic characters to genies to robots - check out these stories of unconventional love from the authors at Excessica! Strange never seemed so hot before! 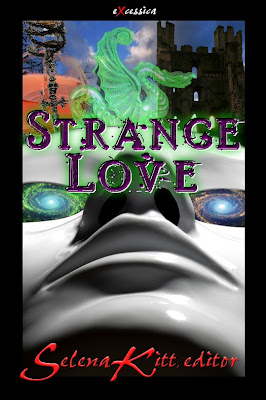 "The angel moved through the garden, disguised as the wind. Father Diego Alba, knelt on a bright green pad in front of the peas, concentrating on the weeding. He noticed the fragrance from the delicately pink blossoms, but paid little mind to the breeze carrying its scent, even as the breeze ruffled Diego’s dark auburn hair.

"It was still early, and the heat of the day was just beginning to bother Diego. He scanned the bed of peas again, making sure he hadn’t left any weeds behind, then swept the pile of pulled weeds into his hands and deposited them on the compost heap. He shook the loose dirt from his hands, then went inside the rectory.

"The angel followed him, first as the warm wind, and then in the intimate fashion to which the angel was accustomed, as the very breath Diego drew.

"Diego went to his small, plain bedroom on the rectory’s second floor and took off his work clothes, placing his gardening clogs at the foot of his bed. He had no masses to say that day, and so he dressed casually, in an off-white guayabera shirt and dark blue slacks. He owned only one other pair of shoes, so the black loafers were a given. He went to the sink and splashed a little water on his face, rubbing the back of his neck to rid himself of the last of the garden soil and sweat that clung to him."

The title was inspired by my all-time favorite Melissa Etheridge song:

(Yep, one of the angels in the video is Bob Harper, the trainer on The Biggest Loser.)

A priest, an angel and a very pure love. Get the book now and find out which other strange tales of love await.

Just looked at your profile and wondered why I never noticed that you are a blogging freakzoid! You write for a bunch of blogs. Do you type in your sleep?

Congrats on the new story. I am working on sending out new submissions after a hiatus for too long for health reasons. I had a bunch of surgeries related to my illness and then got hit by a semi, which set me back even further. I'm sure there's a story in there somewhere to write, but right now I'm still smokin' mad at all the time I lost and the pain I went through. LOL

I will put this on my reading list. I won a bunch through Coffin Hopping and just bought 11 books at the library book sale and have about 14 on reserve from the library. Then two days ago I found out I won Shah's hop too. Whew! I need more hours to read or I need to become a spider so I have more hands and sets of eyes to work with. :P

Becoming a spider would be a great career move for a horror writer, I think.

Isn't that always the way - more great books than time to read them? I won several books through the CoffinHop, too, but by the time I finish 'The Passage' (or, as I like to call it, The Neverending Story), I may need a break from horror.