The Big Short: Inside the Doomsday Machine by Michael Lewis

I read this book because I was listening to public radio on my way home from work one evening and heard an interview with the director of the movie based on it. The director talked about some of the real people Lewis wrote about.

The "character" who stood out in my mind was Michael Burry, who was played in the film by Christian Bale. I have a longstanding interest in Christian Bale. Bale had to learn to play heavy-metal drums to take on the character, the director said, because Burry has some distinctive mannerisms and habits. He's on the autism spectrum, with the characteristics typical of Asperger's.

I thought this sounded interesting enough that I wanted to read the book before I saw the movie. I couldn't understand all of Lewis's more technical points about the bond market. This made the first chapters of the book slow reading for me. I think I caught the gist of it, though: Many, if not most, of the people on Wall Street - less so in the stock market, more so in the bond market - have no idea what products they're actually selling. This was particularly true in the 2000s, before the awful housing market collapse of 2007-2008. But, Lewis would have us know, there hasn't been any real effort to fix the underlying problems.

Some of Lewis's conclusions seem to support those of Barbara Ehrenreich in her book Bright-Sided: How the Relentless Promotion of Positive Thinking Has Undermined America. In my review (here) of that book, I wrote, "The thesis of Bright-Sided is the U.S. residents tend, as a people, to subscribe to an optimistic outlook on life that isn’t so much based in fact as it is in wishful thinking." A few individuals, such as Burry, foresaw that the U.S. subprime mortgage market could collapse, and they made their investors tremendous sums of money when it did. The majority, however, refused to believe that the collapse could ever happen in the way that it did. The bond market put more faith in itself and its regulators than either deserved. 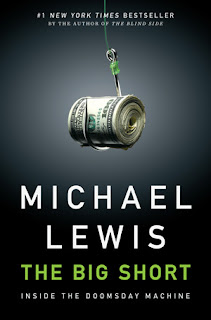 The U.S. financial market was, and remains, fraught with what Lewis refers to as "bombs." They're not the exact same subprime mortgage bombs, since banking regulations have tightened around that particular market. However, these large financial institutions remain able to create markets out of thin air and trade on derivatives and other financial products so arcane, only tiny numbers of people who, like Mike Burry, possess unusual skill sets can actually understand them and their risks.

By the way, Burry never actually plays the drums in the book. He does take up the guitar and develop a passion to learn everything about guitars. Maybe the screenwriter had to change guitars to drums because that was easier to teach a non-musical actor. (I think it's fair to call Christian Bale non-musical, although we all know he did, in fact, sing and dance in the musical Newsies. But that was 20 years ago.)

I checked this book out from my local public library and was not obligated in any way to review it.
Posted by Erin O'Riordan at 8:03 PM