Fun fact about Kareem Abdul-Jabbar: While he was playing basketball at UCLA, he was also double-majoring in English and history. He read his first Sherlock Holmes story as a boy, and he was an avid reader of the detective stories as a young adult.

Sherlock appears in this novel, but he's a relatively minor character. The book is set in 1870, when Sherlock is approximately 16 or 17 years old. Our main character is Sherlock's 23-year-old brother Mycroft. Canonically, we know little about Mycroft other than that he is older and smarter than Sherlock, and that he holds a fairly important position in the British government. If you're familiar with the Guy Ritchie films, you may picture him as Stephen Fry. If the BBC Sherlock series is your frame of reference, your Mycroft is the decidedly ginger Mark Gatiss. If Elementary, then Rhys Ifans, the blond Welsh actor perhaps best known to American audiences as Luna Lovegood's dad in the Harry Potter movies. Abdul-Jabbar's Mycroft is blond, blue-eyed, pale, and quintessentially English.

Every Holmes must have his Watson, and Mycroft's "Watson" is Cyrus Douglas, who was born in Trinidad and is of African descent, although he has been living in England for many years. Douglas is in his forties, and he serves as both best friend and mentor to the young Mycroft. Mycroft is still serving in his first governmental post, secretary to the Secretary of State for War. 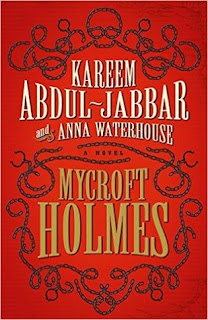 The events of this novel put Mycroft on his path from humble assistant to one of Queen Victoria's faves.

It's a bittersweet mystery and action/adventure story because it has a lot to do with slavery and has a much higher body count than the average Sherlock Holmes tale. When we meet Cyrus Douglas as the owner of a London tobacconist's, he is unmarried, but he did have a wife and child at one point, and what happened to them gives him a Backstory of Infinite Sadness. Abdul-Jabbar and Waterhouse continue to heap miseries upon him...that's probably all I can say without spoiling too much. Suffice it to say, history is sad, and historical fiction leads to heartbreak.

At the beginning of the tale, we meet Mycroft's adorable Trinidadian (but Caucasian) fiancee, Georgiana Sutton. The daughter of a sugar planter, Ms. Sutton is a schoolteacher and a university student studying in London. When I first heard or read that Mycroft was going to have a Trinidadian fiancee in the novel, I assumed she'd be a Black woman. I was a little disappointed that she was a blond, blue-eyed white girl. But Georgiana also isn't as innocent as she seems, so perhaps it's best left the way it is.

Sherlock has no interest in women in this novel. It's not clear why. Is he a budding misogynist, asexual, or perhaps interested in boys? We don't know. By the end of the novel, Mycroft has learned a harsh lesson about love. Will he ever love again? Or is he on his way to becoming the cynical stale cinnamon roll of the BBC series, who quoth, "All lives end. All hearts are broken. Caring is not an advantage, Sherlock"?

The action keeps this story moving quickly, so for me, it was a pretty fast-paced read. And now I have to wait for March 14, 2017, when Kareem Abdul-Jabbar's graphic novel, Mycroft Holmes: The Apocalypse Handbook, comes out. 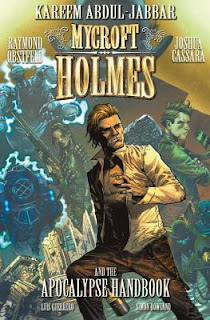 View all my reviews on Goodreads
Posted by Erin O'Riordan at 8:17 PM