I have 'Count of Monte Cristo' Withdrawal

I finished Alexandra Dumas' classic last night, despite my previous insistence that I wasn't going to read it. Reading The Black Count by Tom Reiss changed my mind, and I'm glad it did, because The Count of Monte Cristo is great. I wish I hadn't read an abridged version, but I didn't notice until after I checked it out of the library. 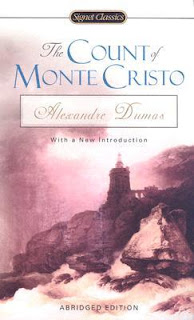 I didn't want this book to end.

But it does, in a really romantic way, like Romeo and Juliet if, instead of committing suicide, each realized the other was still alive and they got to be together. The young couple in question is Maximilian Morrel, whom the Count thinks of as a son, and Valentine Villefort, the daughter of the judge who threw the Count in prison when he was but the sailor Edmond Dantes. Edmond also has a beloved:

"Alone in the world?" repeated a voice behind the Count. "Why?"

Haydee was standing there pale and motionless, looking at the Count in mortal dread.

"To-morrow you will be free, my daughter," answered the Count. "You will then assume your proper place in society; I do not wish my fate to overcloud yours. Daughter of a prince! I bestow on you the wealth and the name of your father!"

Haydee turned pale, and, in a voice choking with emotion, she said: "Then you are leaving me, my lord?"

"Haydee! Haydee! You are young and beautiful. Forget even my name and be happy."

"So be it!" said Haydee. "Your orders shall be obeyed, my lord. I shall even forget your name and be happy!" and stepping back she sought to retire.

The Count shuddered as he caught the tones of her voice which penetrated to the inmost recesses of his heart. His eyes encountered the maiden's, and he could not bear their brilliancy.

"My God!" cried he. "Is it possible that my suspicions are correct? Haydee, would you be happy never to leave me again?"

"I am young," she replied. "I love the life you made so sweet to me, and I should regret to die!"

"Oh, Valentine, he asks me whether I love him! Valentine, tell him whether you love Maximilian!"

The Count felt his heart swelling within him; he opened his arms, and Haydee threw herself into them with a cry.

"Oh, yes, I love you!" she said. "I love you as one loves a father, a brother, a husband! I love you as I love my life, for you are the noblest, the best, and the greatest of all created beings!"

Haydee is the daughter of a prince of the Ottoman Empire; her parents were Christians from Greece. Her father, like the Count himself, was betrayed by the Catalan fisherman Fernand Mondego, later known as the Count de Morcerf. Haydee's father was murdered, her mother died of grief, and Haydee was sold into the slave market at the age of four. The Count rescued/purchased her (for the purpose of taking the young noble out of the slave market) when Haydee was eleven, and was a foster father to her since then - she's about 18 - roughly the same age as Valentine - at this point in the story. It's a bit odd that she has romantic feelings for a guy who's been her dad for seven years, but then, the extremely sheltered Haydee hasn't had much chance to meet many other men.

Of course, I saw the movie before I read the book, and I have to come to the conclusion that book and movie are different animals, enjoyable in slightly different ways. In the movie, rather than Maximilian as a foster son, the Count has Albert de Morcerf as a bio son, and after Albert's stepdad Fernand is dead, the Count and Mercedes live happily ever after. (The 2002 movie, with the screenplay by Jay Wolpert, ends with Dagmara Dominczyk as Mercedes standing with the Count looking out at the ocean, resting her hand on her belly; I presume that Albert is getting a little brother or sister.)

There's really no reason in the book why Mercedes and the Count can't be together in the book - Fernand's death is in both versions. He dies by duel in the movie, by suicide in the book. The widowed Mercedes, Dumas makes a point of telling us, is not only still beautiful but quite possibly more beautiful at 40-ish than at 19. She's just sad, that's all. Still, the Count leaves her behind in the book, to wait for Albert to possibly come back from a military deployment, unless he gets killed.

We don't know - the ending doesn't tell us a) if Albert gets killed or lives, b) if Haydee and the Count get married, and if they ever have any children, c) if Maximilian and Valentine ever see the Count and Haydee again, or d) what the Count is going to do in Italy. I really wish this book hadn't ended.

I like both endings, though. They're both good in their own ways. I like the movie ending a tiny bit better, because it has a nice symmetry if the young, happy couple from the beginning of the story gets to become the older, wiser, sadder but ultimately fulfilled couple at the end.

Haydee's dramatic "I'll die if you leave me" reminds me of this, my current song crush.

(Make allowances for an Irish chick - it'll probably be whiskey AND his name on my last breath.)

The more I think about it, the more I think Haydee is basically saying, "Hey, Dad, let's start having sex." It's kinda weird. I just found out about 'The Sultan of Monte Cristo' by Holy Ghost Writer - I'm going to read that and see how their relationship is fleshed out, at least in one writer's imagination.