The Stories I'd Like to Tell You About Erin O'Riordan

The "Bitches in Bookshops" post was intended to post tomorrow, but in my state of dealing with a head cold, I couldn't read a calendar. 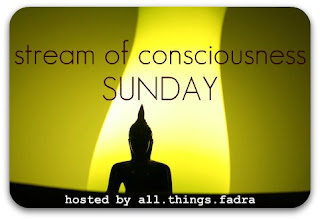 I hadn't been linking up with All Things Fadra for Stream of Consciousness Sunday for a few weeks, but here we go.

Today’s (Optional) Writing Prompt: What are the stories of your life that you love to tell people when you have a chance?


I hadn't been linking up with All Things Fadra for Stream of Consciousness Sunday for a few weeks, but here we go. Let's see how much of my story I can free-write in five minutes:

My dad's family is Northern Irish, from Derry (Londonderry, U.K.). They came to the U.S. in the first half of the 1800s - probably around the 1840s. They fought in the Civil War for the North. My dad's dad was born in Fort Collins, Colorado, and raised in Los Angeles. A juvenile delinquent, he was given the choice of military service or jail. He joined the Navy. In 1941. And got sent to Pearl Harbor. He was 17 at the time - he was wounded, but survived. My dad was born in 1952, after his father got back from the Korean War.

My mom's Polish-Jewish family is from Warsaw, Poland, and came over around 1900. My mom's dad also fought in WWII; he once told me and my brother that what he did during the war was "sit at a desk and smoke cigarettes."

I was born in 1977, grew up a typical '80s kid - Cabbage Patch dolls, My Little Pony, jelly shoes and all - and have wanted to be a writer since at least the second grade. And Catholic schools - lots of Catholic schools, from kindergarten all the way through St. Mary's College of Notre Dame, Indiana.

Email ThisBlogThis!Share to TwitterShare to FacebookShare to Pinterest
Labels: Stream of Consciousness Sunday

What a family history, Erin. Fascinating what they all went through. Yes, you did have all the typicals of a 70's upbringing (I did the whole Catholic school thing too so I have some perspective in that regard). Right this minute, I sit about 35-45 minutes away from St. Mary's of Notre Dame in the middle of nowhere's ville, IN.

Love that you know these stories of your family!!

Also love that you are a fellow 80s baby!! I used to love Cabbage Patch dolls and different colored jelly shoes!

The sparkly purple ones were my favorite.