Before we get to WIP Wednesday: The lovely, talented, preggers Michelle at The Vintage Apple is giving away a $30 Amazon gift card to one lucky winner. Check out her Oh How Pinteresting! blog post, add your Pinterest-related post link, and enter! Warning: you may become a Pinterest pinhead if  you're not already.

This is the WIP Wednesday deal. Authors needed - all genres! Are you an author who'd like to share a 100- to 200-word blurb about a current work in progress on a future WIP Wednesday? If so, please send an e-mail to Erin O'Riordan (erinoriordan AT sbcglobal DOT net).


Postponed: I am not going to be able to finish the story I intended for the Having My Baby anthology (you can read an excerpt HERE). I thought I had a workable draft, but what I actually had was a hot mess. That one's abandoned, at least for now.


In Editing: "Going Native," a short story I wrote in which an anthropologist (a woman) visiting Vis, Croatia, picks up a street hustler, is in the editing stages. 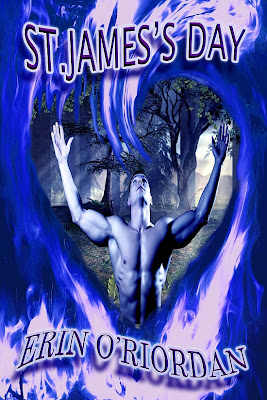 Tit Elingtin and I are editing St. James' Day, the third book in the Pagan Spirits series. We added a sex scene this morning - it's almost entirely Tit's phrasing. A small sample:


“Your pussy’s so beautiful. It’s the prettiest color of pink.” He leaned forward and licked up a bead of juice he saw emerge from her lips. Trina lay back, pulling up her skirt and spreading her legs wide for Mike to get the full view and easy access. She pulled her top off and started to rub her nipples as Mike suckled her clit. Rubbing his tongue as deep inside her as he could, he pulled her juices into his mouth, drinking her love.

Started: I'm trying to write up the experience of the very last night evah in my local GLBTQ bar before it closed down - possibly for a SexIs article. I'm trying to capture the feel. This is how I started a very early draft:


10:04 a.m., Saturday, June 16, 2012. I’d rather be at home doing my usual freelance editing, but as a ridadie chick, I’ve solemnly sworn to accompany hubby to his remodeling job and fire-tape a garage ceiling. It’s early, the temperature is already in the ‘80s, and I feel like a complete slob in hubby’s paint-covered work shorts and a shredded-to-hell old St. Patrick’s Day tank top. As we pass the complex that was once the town brewery, I read the marquis…

We knew this day was coming, but until then, we hadn’t been sure exactly when or how it would end: The Truman’s Entertainment Complex (TEC), the linked GLBTQ bar/dance club/GLBTQ sports bar and only major not-straight drinking establishment within a 50-mile radius, is closing forever after 21 years in business. We’ve only lived in this small city for 12 of those years, and we’re not regulars, but the bar’s in our neighborhood. In the summers, we’d made it part of our occasional rounds enough that we knew the owner and the regular drag queens.  Tonight is its very last night.
----

Might Be Something: I mentioned that one of my faves in Suite Encounters: Hotel Sex Stories was "Night School" by Valerie Alexander. In her story about a male escort (Dalton) and a female hotel desk clerk, Alexander wrote, "I wondered who Dalton was seeing tonight and what they would do. I knew most of his clients were men, though he saw couples and the occasional woman, too."

I really liked the idea of a male escort seeing a couple. Without any particular market in mind, I jotted down a few ideas:

The woman who leaned out of the window of the town car looked around forty, very attractive and caramel blonde. Judging by her giggle, she was intoxicated as well. She waved him over to the window, and Ed felt relief. He hoped she wanted him. He would have done anything to get out of the hot, humid wind. If he had his way, he’d have liked to get out of his clothes.
He approached the car. “You lost or something, sweetheart?”
She shook her head. “I thought maybe you’d like to take a ride with us.”
“Us” meant the caramel blonde and the man seated next to her. He was about fifty and impeccably dressed in a dark gray suit. Ed flashed them his best smile. “Whatever you want, sweetheart.”
She opened the door, and Ed sat across from them in the rear-facing seat. The couple was married, judging by their matching platinum rings. Hers was topped by an engagement band with a diamond the size of a horse’s eye. Ed turned around and looked at the driver through the lightly tinted divider. “Can he hear us?”
The man shook his head. “Stanley is very well-paid not to hear a thing.” He looked serious.
Ed leaned back and made himself comfortable while the blonde poured them each a flute of champagne. As bubbly as she acted, it seemed as if she’d already had half a bottle. “What can I do for you folks tonight?”
“Keep us company for the night?” The blonde asked rather than told. She handed him the wine. With his free hand, Ed reached down and took hold of her ankle, lifting it into his lap and removing the blonde’s shoe. He placed his bare foot in her lap and stroked it. The blonde giggled some more and felt up Ed’s soft dick through his jeans with her toes.

What are you writing this WIP Wednesday?
Posted by Erin O'Riordan at 10:11 AM