Stopping by from the Shameless Summer Giveaway Hop? Please visit Friday's post HERE for a chance to win free books!

My historical American composer crush is George Gershwin. Still, I'm a native of the U.S. Midwest, so I have a certain Midwestern girl's affection for the composer Cole Porter. It's Porter's birthday; he was born June 9, 1891, in the small city of Peru, Indiana. This post was inspired by Cathy Day's post "For Cole Porter's Birthday, My Personal Playlist." Day is a novelist, an essayist, a professor at Indiana's Ball State University, and a Peru native.

These are my personal favorite Cole Porter songs. I would not be much of a '90s girl if I didn't harbor a certain affection for the Bono/Frank Sinatra duet of "I've Got You Under My Skin." If I look hard enough, I'm sure I could still find the CD maxi single I bought when the duet came out.

(As a matter of fact, I was such a big U2 fan, that song may have inspired a brief fascination with Frank Sinatra, which may have led me to want to read From Here to Eternity. Sinatra played Maggio, the buddy of Robert E. Lee "Prew" Prewitt.)

Nor would I be much of a '90s girl if I couldn't remember the version of "I Get a Kick Out of You" that Mel Torme recorded for a Mountain Dew commercial.

I'm not a fan of Mountain Dew, but then again, I'm not a fan of cocaine, either, which is what the real lyrics suggest might give a person a kick. Frank Sinatra sang "I Get a Kick Out of You" in the 1954 version of Anything Goes, which also starred Ethel Merman. It remains the one Cole Porter musical I've ever seen performed live on stage.

If you've ever seen Indiana Jones and the Temple of Doom (probably the only major Hollywood film with several scenes devoted to the worship of Kali), you may remember Kate Capshaw's version of the title song in the Mandarin language.

When I was a high school student, my local library had this book, featuring Ward Schumaker's artwork based on "Let's Do It (Let's Fall in Love)." According to Goodreads, it was published in November 1993 (and the song is from 1928). I probably checked it out five times; I adored it. 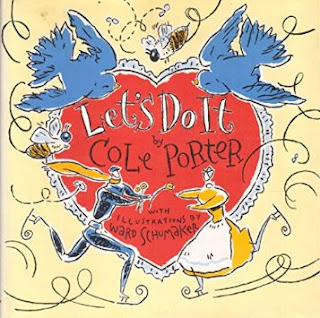 A good pop version of "Let's Do It" is by Alanis Morissette. This is from the soundtrack of De-Lovely, with Kevin Kline and my most feminist girlcrush Ashley Judd.

Another item I repeatedly checked out of my local library before I finally broke down and bought a copy (after another library patron lost the library's copy) was an album called Jazz Divas - Studio. It has two of the loveliest Cole Porter songs: Ella Fitzgerald's version of "Night and Day," and Shirley Horn's "Love For Sale."


This arrangement is upbeat, but as I listen to this song, I can't help but think about Porter trying to express some of the angst of being gay in an era of strict sexual repression.

"Love For Sale," on the other hand, can never be anything by melancholy, in a world-weary sort of way. Very Cole Porter.

Those are the essential Cole Porter tunes for me. What are your favorites?
Posted by Erin O'Riordan at 7:00 AM

'It's Bad for Me' is my favorite.
http://www.youtube.com/watch?v=peNJXHMFZ_M
(the lyrics start after 50 seconds or so)

There's also 'Katie Went to Haiti' which I find amusing, but I can't find any good version of it online.