This is the cover art for Ravaged, the anthology that will contain my short story "Sheep Shifter." I'm on round 2 of edits right now. 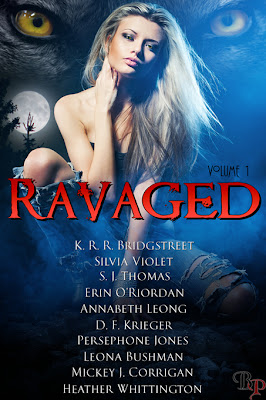 When I wasn't editing yesterday...or drinking beer and eating veggie pizza...or watching the Vampire Diaries next-to-season-finale, followed by a particularly poignant Person of Interest (dead ex-girlfriends and all that), I was reading Intimate Strangers by Laura Taylor.

Intimate Strangers by Laura Taylor
My rating: 3 of 5 stars

Some lines made me laugh, such as, "Her breasts plumped against her chest, her nipples stabbing like delicate daggers through the barrier of their clothing." I'm sorry, but when you start telling me about dagger nipples, you make me think of the Austin Powers fembots.

I really wanted to like this book, too. Since my current pop cultural obsession is Person of Interest, I found the premise of Nicholas - a lonely, isolated former CIA operative, similar to the TV character John Reese - intriguing. In actual practice, this novel is full of not-quite-believable/unnatural dialogue and telling where it should be showing, which was disappointing. Intriguing set-up, but less than ideal execution.

It should be noted, however, that instead of a Unabomber shack, Nicholas has a gorgeous multi-level home in the Nevada wilderness, complete with a roaring fireplace and a personal library. He's not only a survivalist, but also - secretly - a bestseller author of thrillers. Hannah doesn't figure this out until the very end of the novel - right before Nicholas' marriage proposal - but it's through Nicholas' printed words that she knows, deep down, he's a good-hearted person.

'Cause, you know, he did kill a bunch of people, so the goodness is somewhat buried under layers of growly alpha-male aggression. Like Bella Swan, Hannah Cassidy is quite readily willing to forgive the taking of human lives - and the overt threat to her own life, since at the moment they met, Nicholas was holding a knife to her throat. I really didn't mind his aggression, though. The reader knows he never intended to hurt her; his intent is to scare her out of his territory. I respond well to the emotionally damaged, outwardly mega-aggressive but inwardly sensitive type, which is why Zsadist is my favorite Black Dagger Brotherhood character and Lover Awakened is my favorite J.R. Ward book.

Dagger nipples and throbbing loins. Hmm, sounds worse than my first novel that will never see the light of day!
I enjoy Person of Interest also so I can see how this would have appealed to you. Sorry it didn't deliver. Keep looking, I'm sure it's out there!

Thanks for joining the Planet Weidknecht Weekend Hop!