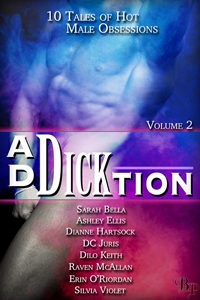 Breathless Press would like to announce the release of Ad-Dick-Tion Volume 2! This anthology of erotica contains my m/m/f short story "Aftercare."

The anthology's official tag line is, "In this collection of sizzling hot male obsessions, feel the heat with m/m stories by our wonderful Breathless Press authors."

"Aftercare" has been described this way: "When respectable Dr. Maggie is propositioned by one of her patients and his sexy partner, flirtation flares into a 911 emergency of passion." A little excerpt:

"We have to take our time. We have all night, don't we? Or are you wearing that goddamn hospital pager again?"
I ran my hands over my hips to show that I wasn't concealing the pager under my skirt. "I'm not on call," I said. And since he wanted to do things slowly, I decided to take my time and play with him. I got down on the floor, kneeling.
"What are you doing?"
"Taking things slowly." I showed him. Joey had very big feet. Those feet were one part of him I'd left unexplored the last time we'd been together, but I wouldn't make the same mistake this time. I kissed the top of his foot.
As my fingers brushed against the bottom of his foot, I discovered what he meant; he was very ticklish. I was hoping what followed would be like great porn, but instead it was more like a cartoon. I tried to keep hold of Joey's foot while he repeatedly jerked it away. Trying to kiss it again was even more futile. Soon I gave up and started kissing my way up his leg.
I worked my way up to his thigh, then stopped.
"Why did you stop?"
I took hold of the waistband of his white shorts and tugged at them. "Let's get these off of you."
He looked excited by the idea, but said, "No, Maggie. I don't want you to do me. I want to do you."
There was something about the way Joey said "I want to do you" that melted me like a popsicle on a dashboard in August. I felt a surge of moisture in my panties. Not cool like a frosty treat, but hot like the touch of Joey's hand on the small of my back.
Then he did something I wasn't expecting: he lifted me off the floor. I struggled a bit; I usually don't like being picked up. Loss of control throws me off my game. Not to mention that I'd operated on his back only weeks ago.

It's available in a variety of formats, and you can get it on Amazon for your Kindle (or Kindle for PC program).

You won't need to have read the first volume to follow the second. If you're the type who likes to read a series in order, you can also catch up with the first one on Amazon.
Posted by Erin O'Riordan at 9:57 AM