I liked Fifty Shades of Grey by E.L. James. I liked it a lot. I was a bit scared at first by Anastasia Steele’s frequent use of the word “crap,” a singularly unappealing word. However, I soon found Ana to be a relatable young woman. Who hasn’t felt overcome in the sight of a human being so attractive it should virtually be a crime? I don’t wonder why she fell so hard for Christian Grey. He’s a very attractive character.

I wanted to withhold some of my comments about this novel until I’d read into Beyond Heaving Bosoms: The Smart Bitches’ Guide to Romance Novels by Sarah Wendell and Candy Tan of the website SmartBitchesTrashyBooks.com.  (I’m about halfway through it.) I wanted to compare Fifty Shades to the romance/erotica genre as a whole – not to use genre conventions as a positive or a negative, but merely to show ways in which Fifty Shades falls inside a specific literary tradition.

The Innocent Heroine: When the novel commences, Ana is a 21-year-old virgin. This is to be expected, because romance/erotica heroines are, by genre convention, virginal, either literally or figuratively. “One of the more peculiar constants of most romance novels,” Wendell and Tan write, “from historicals to contemporaries to paranormals and even erotica, is the sexually unawakened state of the heroine. She’s relatively innocent, as proven by her inexperience or her outright virginity. No matter what type she is, she’s definitely not the ho-type.” The Unawakened Woman is also unaware of her own beauty, a convention Ana readily embodies.

Tan and Wendell describe ten types of heroines. I feel Ana Steele falls into the category of ingénue. Her characteristics include being “young, innocent, and a tender flower, but what she lacks in experience, she more than makes up for in good humor and a surprising resiliency. She can be clueless at times, but she differentiates herself from the Too Stupid to Live heroine by displaying flashes of good sense.”

Because James wrote Fifty Shades, originally, as Twilight fan fiction, the comparison to Bella Swan from the Twilight series is a useful one. One might assume that Bella is an example of Too Stupid to Live, but Wendell and Tan specifically name Bella as an example of Doormat. Another example of Doormat is Marissa from J.R. Ward’s Black Dagger Brotherhood series. (The examples of Ingénue are not ones I recognize.)

The Irresistible Heroine: No matter what her type, though, the heroine has what Wendell and Tan refer to (somewhat obnoxiously, in my opinion) as The Magic Hoo Hoo. “One taste of the Magic Hoo Hoo is all it takes; the hero won’t be satisfied with anything else, physically or emotionally.” Stephenie Meyer would say she becomes his own personal brand of heroin(e). Christian Grey would say, “You’ve bewitched me:” another genre convention followed. 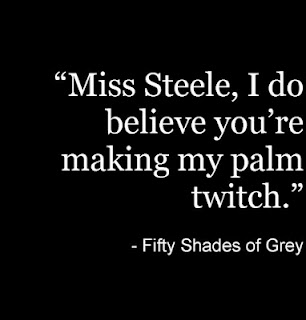 Identifying with Ana: Is a romance/erotica novel heroine meant to be a placeholder for the reader? This is a matter of some debate, and depends somewhat on the reader and the writer. It’s not necessary for the reader to put herself in the heroine’s shoes, as long as the reader has empathy for the heroine. I found myself easily able to empathize with Ana.

Identifying with Christian: Wendell and Tan suggest that readers are sometimes harsher critics of the heroine of the romance novel than of the hero. “Why is it that romance readers can tolerate any number of crazed behaviors from a romance hero, whereas if a real-life dude did one-tenth of a hero’s dastardly deeds…she’d be calling 911 faster than you can say ‘restraining order?’” The male protagonist gets more of pass, suggests Laura Kinsale in one quote, because “often that’s the way it is in real life – we see what we want to see regarding the opposite sex when we’re in love.” Still, Wendell and Tan add, “Women are not dumb. We know when we’re reading fiction.”

Christian Grey likes to be in control. He can be overbearing and stalkerish – characteristics he still shares with Edward Cullen. It’s okay to like that in a fictional character. “…The fantasy of an overbearing hero can represent for some women devotion, attraction, and protection instead of bullying.” Key word: fantasy. This does not mean we want our significant others to act like control freaks in real life.

The male protagonist also inspires a kind of literary penis envy: readers like strong heroes because we identify with their strength. A more Jungian interpretation of this theory is that “If the hero is the shadow self of the heroine, and the reader, then her conquest represents the same integration of selves, and that integration is what makes the hero so crucially important, and also what makes the happy ending so satisfying.”

Fifty Shades of Grey does not come with happy ending. Perhaps the trilogy does – I don’t know (and no spoilers, please!), but the first book ends at an impasse. Well played, E.L. James. You knew I would have to know how the impasse was resolved, and thus I’d need to buy the next book(s). Either way, it’s a well-worn trope in popular fiction and, especially, Hollywood films that the hero is entitled to the “girl.” See: http://www.cracked.com/article_19785_5-ways-modern-men-are-trained-to-hate-women.html

The Alpha Hero: BUT when I say that I approve of Christian Grey as a hero, you might take that to mean there are aspects of Christian Grey I want to come to terms with. He also has other qualities that generally make fictional heroes attractive, including the stormy gray eyes. “What, twelve shades of gray doesn’t do it for you? While your heroine may have jewel-tone eyes of the most priceless variety, heroes, they are usually described in metallic terms, ranging from the ever-popular gunmetal gray to steel blue, cold green, or, in a rare and paranormal exception, amber. Never, however, are the hero’s eyes purple. That’s indubitably too gay.”

Note: Wendell and Tan do not say that they personally have a problem with gay, in life or in fiction. They only say that in the conventional heterosexual romance novel trope, “gay” and “bisexual” were usually shorthand for “up to no good.” They recognize that this is slowly changing as m/m/f becomes an increasingly popular subgenre. (Yay!) Note, too, that although Ana embarrasses Christian and herself by asking him if he’s gay early in the novel (and then later asks him if any of his Dom/sub partners have been men), Christian Grey is unrelentingly heterosexual.

He’s alpha without being what Wendell and Tan term an “alphole” (the amalgamation of alpha and asshole). Alphas are strong and confident; alpholes are cruel. Christian Grey is never cruel. He may have issues the size of Washington State, but he never does anything with Ana unless he has her consent.

He also holds at least two of the Romance Cliché Job Options: billionaire and CEO of an unspecified industry. What does he do? Something with food distribution? 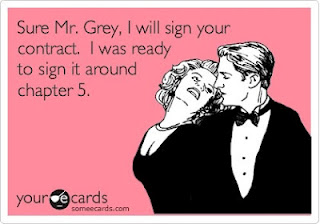 In Conclusion: If you’re one of the readers embarrassed to be seen with a copy of Fifty Shades, or any romance novel (as are the women described here), don’t be. “Romance novels do not make you stupid, we promise,” Wendell and Tan write in a section titled, “So, Why is Romance So Often and So Frequently Denigrated?” They answer their own question thus: “Are you a woman? Look in your pants. That could be why.” In short, plain ol’ sexism makes a genre dominated by female writers and readers (and really, all genres are dominated by female readers!) less acceptable to society at large. Fuck society – read proudly.

What to Read After Fifty Shades http://blogcritics.org/books/article/fed-up-of-fifty-shades-six/

On the other hand, there were enough things that bothered me (the heroine's constant calling of her vagina "down there", the fact that signs of an abusive relationship were red flagging all over the place) to make me unsure if I want to read any of the others.

I'm not a huge fan of present tense, either. I got somewhat used to it through Hunger Games, but my novel preference is still past tense.

What I had a hard time with (and still am, as I'm well over halfway through Darker), is the marked lack of editing. While I can enjoy the basic story, the excessive repetition of certain words (clamber) and phrases, among other things, is distracting, and reminds me why I stopped reading Danielle Steel about twelve years ago.

Darker is slightly better edited (or written; I question whether anyone actually edited this trilogy) than the first book, but it still has all the repetitive problems, and a confusing POV issue in one particular paragraph that caused me to reread the passage three times.

Double crap... you forgot that!