Ok, I'm cheating a little bit. I'm counting a series as a "book." It's always hard to narrow it down to only ten, and a series was meant to read as a single unit anyway. That's my excuse, and it's my blog, so there.

10 - House of Sand and Fog by Andre Dubus III

This is a multi-generational book in my family - my grandma read it, and then I did. It's very tragic and very well-written. The narrative voice gets more chaotic as events in the characters' lives slip through their fingers.

If your nonfiction tastes run to neurology, then you probably know that anything Oliver Sacks is worth reading. He's never dry and clinical, but always engaging. Most important take-away lesson from this book? Hallucinations are common, often have an organic cause and are rarely a sign of "losing one's mind."

8 - Who Could That Be at This Hour? by Lemony Snicket

I am so glad that Lemony Snicket has started the All the Wrong Questions series. I'm not expecting any answers to the questions remaining from the Series of Unfortunate Events books, but I am expecting insouciant wordplay and copious literary references. The Maltese Falcon, Johnny Tremain, Little House on the Prairie, and "The Interlopers" by Saki are but a few of the literary works mentioned in this first of four novels in which we're introduced to Snicket as a 13-year-old apprentice to V.F.D. 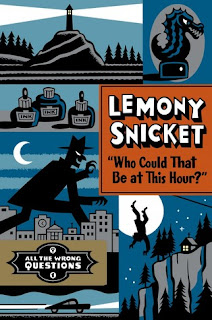 In April 2013, we're going to get The Dark by Snicket, but it's an unrelated, stand-alone picture book, like The Lump of Coal or The Composer Is Dead.

7 - Shadow of Night/A Discovery of Witches by Deborah Harkness

I can't believe I only read this books earlier this year - it feels like I've known this story for years and years. I didn't think I was going to like Diana Bishop at first, but what I didn't like about her was that her natural witchiness was so repressed. Once she started to come into her power, I really started to love her.

Also, if I had to marry a fictional character, it would be Matthew Clairmont. Seriously, give him to me. I anxiously await the third book, but a release date has not yet been set.

6 - The Black Count: Glory, Revolution, Betrayal and the Real Count of Monte Cristo by Tom Reiss

This story is dramatic, heartbreaking and unforgettable - and nonfiction. With a dissolute aristocratic French father and a Haitian slave mother, Alex Dumas (father of the great French novelist) spent his life torn between French Revolutionary ideals of universal equality and harsh racism. Although his famous son was only four years old when Alex died, Alex's nightmarish captivity in Italy and his heroism inspired his son's great novels.

Despite what I said in In Which the Term "13-Inch" Is Thrown About Shamelessly, I'm putting The Count of Monte Cristo on my reading list for 2013.

The blogosphere, all pumped up for the movie release earlier this year, got me interested in this series. I was surprised by how much I actually like it; it wasn't nearly as grim as I imagined, owing to Collins' skill in getting the reader inside the head of Katniss Everdeen.

Except for a handful of short stories in grade school, I'd never read the original canon Holmes stories before. This is what I was reading when 2011 turned over to 2012. I quite enjoyed the Holmes tales, though I still have one more volume on my bookshelf unread.

3 - The Amber Spyglass by Philip Pullman

The ending to the His Dark Materials trilogy felt like Philip Pullman reached into my chest, pulled out my beating heart, and showed it to me, but it was worth it to learn what Pullman knows about love and about being a good person. (So many tears.) I don't think I can ever look at marzipan the same way again.

I kept thinking that since Wuthering Heights is the closest thing I have to a favorite book ever, it was silly that I hadn't read Emily Bronte's sister's greatest novel. I didn't think I would like it as much - I already knew the plot after watching the Orson Welles movie on AMC years ago - but it's really quite a compelling story. Best part? Jane and Edward's verbal sparring. The dialogue is brilliant, on par with Lizzie Bennett vs. Fitzwilliam Darcy. The best, best part? Jane's stubborn independence. Go, girl.

I started a GoodReads discussion of Rochester vs. Heathcliff here. Now I need a t-shirt that says "Team Edward" on the front and "...Fairfax Rochester" on the back.

My annotated copy of Jane Eyre suggested that since I liked it, I might also like Middlemarch by George Eliot, so I'm putting that on my reading list for 2013. I imagine that someday I'll also want to read Jean Rhys' Wide Sargasso Sea. I do feel quite a bit of sympathy for Bertha Mason Rochester already.

(I also feel a kinship with "that strange woman" Grace Poole, because Grace's job is strikingly similar to the job of a modern-day mental health technician, which I have been. I didn't keep a bottle of gin nearby, though. Just 7-Eleven coffee. That's the only difference.)

1 - The War Trilogy by James Jones

Am I obsessed with From Here to Eternity, The Thin Red Line, and Whistle much? My blog posts from summer and fall of this year would indicate that yes. I really had no idea that James Ramon Jones was such an amazing writer - I think he's quite underrated and under-read today. (I remind you that From Here to Eternity beat out Catcher in the Rye for the 1950 National Book Award.) I've spent so much digital ink on these three brilliant books this year, so I will simply tell you, good readers, what I told my cousins when they said they couldn't understand the 1998 film version of the Thin Red Line film, written by Terrence Malick: "Read the book. First read From Here to Eternity - not the heavily-censored 1950s film, but the book - and then read The Thin Red Line. Then it all makes sense."

My perfectly PG-13 comment to the effect got removed from this post about songs inspired by books, but I still say the Flo Rida song "Whistle" is inadvertent homage to the James Jones novel of the same name.

I have not read the newest, "restored" edition of From Here to Eternity, though, so I am going to have to get the new edition and read it all over again. Don't think I won't enjoy it, especially if one of the restored sex scenes involves Isaac Nathan Bloom.
Posted by Erin O'Riordan at 12:00 AM

Interesting list. I'll have to check most of those out, especially the classics. I love the classics. But I have to pass on The Hunger Games. I'm sure they are wonderful but the basic premise just disturbs the hell out of me -- which is probably the point. But it'll be the thing that sticks with me for a long time and one that robs my sleep. The bitch of being an empath, I'm afraid.

I think you should, Jesse. Come on, everybody's doing it.