In her December meditation for BBI Media, the publisher of the magazines Witches&Pagans, Crone and SageWoman, writer/musician Lisa Wersal's winter thoughts were of the divine feminine. She writes, "Even now when I am no longer a practicing Christian, I still occasionally steal into Catholic churches to meditate in quiet candlelit alcoves dedicated to Our Lady. Several other feminine divinities also now capture my attention, and their representations grace my home mantle: Tibet’s compassionate Kwan Yin, the Hindu goddess Sarasvati, who inspires creative endeavors, and Yemaya, Brazil’s 'Mother of Pearls.' I invoke their guidance, their blessings, their healing."

This Winter Solstice month, I'd like to dedicate my Wednesdays to the goddesses associated with this time of the year. 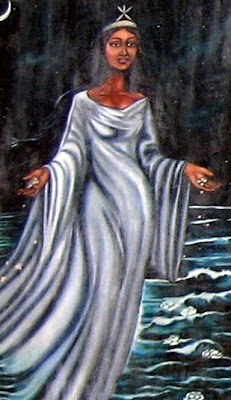 Don't worry: WIP Wednesday will continue. If you'd like to share a blurb about a current work-in-progress, contact me at erinoriordan (at) sbcglobal (dot) net. We can do both. It's a flexible blog.

"Mother Night" is the Northern European name for the longest night of the year, according to GoddessGift.com. In Norse myth, it was on Mother Night that the great goddess Frigga, goddess of beauty, love and marriage, gave birth to her son Baldur. In ancient times, the Vikings burned candles on this night each year, then stored them away to burn again when a woman went into labor, as a blessing over the birthing process.

Baldur would eventually be killed by a dart made out of a mistletoe. Frigga, who can see the future and knew that Baldur would die, made every being on the earth promise not to hurt Baldur, but she neglected the mistletoe because she thought it was insignificant. The trickster-god Loki took advantage of Frigga's oversight and tricked Baldur's blind brother into hurling the mistletoe dart, unwittingly killing the beloved young god. Frigga's tears became the mistletoe's white berries. 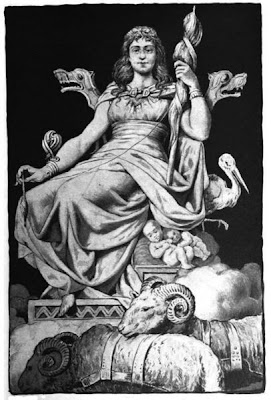 Frigga's ability to see the future was related to her spinning wheel, the Wheel of Fate. By the names of Holda (Holle) and Bertha (Perchta), Frigga is associated in parts of Austria and Germany with the spinning maidens who punish lazy girls and reward industrious ones at this time of year. Generally, Holda is the kindly one, and Bertha is more frightening, but Bertha is known to give gifts of apples and nuts to young women who've been industrious at the spinning wheel. The Italians in Switzerland know her as Berta and associate her with La Befana, the benign gift-bestowing witch of Southern Italy. In Christian times, Holda and Bertha were sometimes assigned the task of guiding the souls of unbaptized children.

Sometimes Frigga (or Frigg) is differentiated from the Norse goddess Freya, but often they are thought to refer to the same being. Queen of the Valkyries, amorous Freya collects dead warriors from the battlefield, taking them to her hall to feast and joust and be her lovers. I wrote about Freya in "Black Bear Skin," a short story that appeared in Divine Matches. 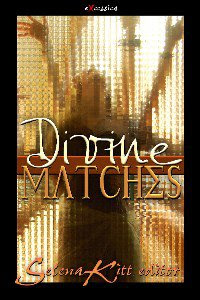 The bawdy story of how Freya acquired the necklace of the Brisings, an exquisite ruby-and-amber piece, by agreeing to sexual shenanigans with the dwarves who created it has come down to us through folklore as the sweet children's story of Snow White and the Seven Dwarves. (We'll see if Kristen Stewart can give Snow White back her bad reputation when Snow White and the Huntsman comes out.) 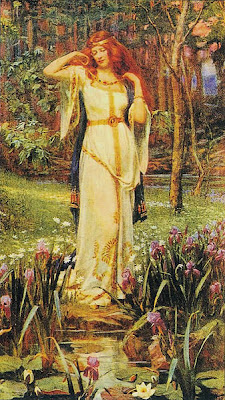 That's the Winter Solstice goddess tradition in Northern Europe. Next week, we travel to India to learn more about Sarasvati, then go to Japan to meet Amaterasu.

The other reference I used is an old book called Christmas Customs and Traditions: Their History and Significance by Clement A. Miles.

P.S. Mother Night is also a 1961 novel by Kurt Vonnegut, Jr. He took the title from Faust:

Faust. You call yourself a part, yet whole you're standing there.

Mephistopheles. A modest truth do I declare.
A man, the microcosmic fool, down in his soul
Is wont to think himself a whole,
But I'm part of the Part which at the first was all,
Part of the Darkness that gave birth to Light,
The haughty Light that now with Mother Night
Disputes her ancient rank and space withal,
And yet 'twill not succeed, since, strive as strive it may,
Fettered to bodies will Light stay.
It streams from bodies, it makes bodies fair,
A body hinders it upon its way,
And so, I hope, it has not long to stay
And will with bodies their destruction share.

Witchcraft Second Degree. Wiccan Themed. by Black Witch S. $29.97 from Smashwords.com
Witchcraft - A 2nd Year in the Craft. This course will introduce you to the basics of Witchcraft with a Wiccan fusion. Step-by-step beginner exercises are included to help you start your journey safely and to show you exactly what to do in order to achieve your full magical potential. Plus, you can apply for a Certification of Completion for 2nd Degree Witchcraft.
Posted by Erin O'Riordan at 7:04 AM