Authors, would you like to share approximately 100-200 words about a current work in progress on a future WIP Wednesday? If so, please e-mail the details to erinoriordan AT sbcglobal DOT net.

Erin O'Riordan: My current works in progress? I just finished editing another Hurricane book by Joe Cacciotti, and I'm collaborating with Rushmore Judd on a short story called "The Witch." 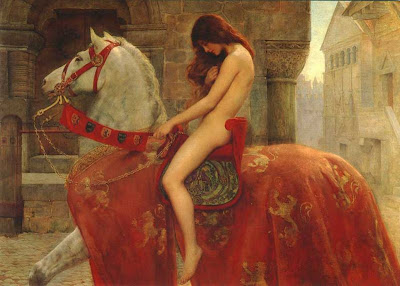 Winter Solstice Wednesday: According to GoddessGift.com, Rhiannon was the Celtic goddess of the moon and inspiration and Queen of the Fairies. She married the mortal king of Wales, who first spotted her as she rode a fine white horse. Falsely accused of killing their infant son, she was punished by being forced to wear a horse collar. When travelers came to the kingdom, she would tell them of her crime and offer to carry them on her back to the castle. Her son, raised by a farm couple, was later restored to the throne, and Rhiannon regained her place in royal society.

Some legends link Rhiannon with Vivienne, the Lady of the Lake in Arthurian legend. She is closely linked with horses, and sometimes associated with the Gaulish-Roman goddess Epona, the Great Mare (a name the Romans also bestowed on the grain-goddess Demeter). Epona was especially beloved among the Roman cavalry. 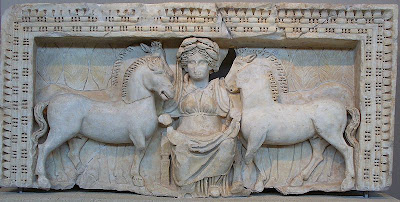 Rhiannon's part on the Winter Solstice was to ride through the Welsh people's dreams, giving them visions and bringing them inspiration for the coming year. The Irish version of Rhiannon's name is Mare, pronounced MAH-ray, which is said to be the source of the word "nightmare."

Although associated with a white horse, Rhiannon inspired the Welsh custom of Mari Lwyd, or Gray Mare. A mare's skull, sometimes made of wood or cardboard, is mounted on a pole and draped with a white sheet. It may be finely decorated, with colorful ribbons for reins, glass eyes and even snapping jaws. The mare is carried through the streets by a colorfully-dressed party singing traditional songs, sometimes mixed with Christmas carols. Sometimes, a rhyme contest would take place between the members of the Mari party and those inside the houses they visited. The party hoped to be rewarded for their entertainments with cakes and perhaps ale. It was a form of wassailing.

Of course, "Rhiannon" is also a Fleetwood Mac song written by Stevie Nicks. She also inspired the English nursery rhyme:

Ride a cockhorse to Banbury Cross
to see a fine lady upon a white horse,
With rings on her fingers and bells on her toes
she shall have music wherever she goes. 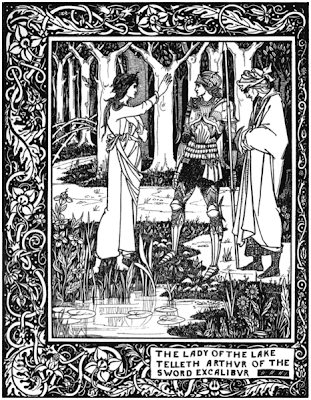 The goddess Rhiannon shares her name with author Rhiannon Mills, who has written the paranormal romances Immortal Ties and Immortal Embrace. Her beautiful, sex-positive blog is Rhiannon's Paranormally Romantic Bits and Pieces.
Posted by Erin O'Riordan at 7:00 AM

I have so many WIPs going on at once right now! LOL... Sometimes my mind kicks into overdrive and I end up with a million short stories and novel starts and don't know which ones to write first. Currently, I'm pushing out the release of my novella (from Knight Watch Press), THE DEMON KING, working on the sequel, and writing a novel about Elizabeth Bathory. Fun stuff... :)Happy WIP Wednesday!

I found your post so informative, Erin. I didn't know that history - it was fascinating. Thanks for sharing that! As for my WIPs, my 13th book, Vicki's Key, will be released early next year so I'm gearing up for that. And I'm halfway through with Secrets of a Dangerous Woman, due out in the fall of 2012. Plus just finished outlining Book #15, Dylan's Song, which will take me to Ireland...

Elizabeth Bathory is one historical figure who gives me the creeps. I don't want to read about her, but I'm so fascinated I can't look away.

This sounds exciting. I'd love to post a portion of a work in progress! I have one about a woman swept through a portal ending up in the ancient land of Atlantis, where she is mistaken for a Goddess. Of course there's the ongoing story about my demon succubus infiltrating a pack of shapeshifting werewolves for the love of the only man that can survive her.
And, Rhiannon, I can't wait to read your Elizabeth Bathory story, but I'm with Erin on this one, I'm a little hesitant but know I'll be intrigued.