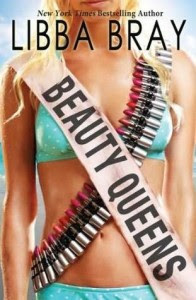 Looking over the books I read this year, I was surprised by how much YA I read and how little paranormal romance. In part, I blame Amazon Vine - I keep choosing YA books as my twice-monthly free items. My TBR pile going into 2012 has several PNR paperbacks, but I'm in no particular hurry to get to them. I do feel that if I give the genre a bit of a rest, I'll only appreciate it more when I do get back to it.

Not all of these were published in 2011, but this is the year I read them. Here they are in alphabetical order.

Beauty Queens by Libba Bray. The whole thing is a delicious send-up of pop culture and sexism. My favorite character is Adina, Miss New Hampshire, a journalist embedded in the pageant. She's a smart, Jewish feminist - sort of a teenage Emma Goldman. I also like lesbian, comic-book-loving Miss Michigan (Jennifer), the transgendered contestant (I won't give it away) and Indian-Californian Valley Girl DJ-wannabe Miss California (Shanti).

Dead Reckoning by Charlaine Harris. This is the 11th Sookie Stackhouse book. (Only 2 more to go -
Posted by Erin O'Riordan at 6:41 AM

Hi Erin, I hope you have an amazing New Year! Juliet Immortal sounds like a great read. I'll have to find it and read it in the coming new year! :)

Wow...I've read 28 books this year and none are on this list LOL. Hrrmmm...I need to read faster. Thanks for visiting my blog, Erin. You have a Happy New Year.

I still have quite a few Charlaine Harris books to catch up on. Thanks for this list--we obviously have many tastes in common. And the complete Sherlock Holmes was my Christmas present from my parents more years ago than I care to remember.

The only book I read on your list was Juliet Immortal and I thought it was amazing. I absolutely did not review it because I didn't know how. Sometimes when I think a book is that good, I don't review it. I should have put that one on my list! I'm glad you included it!!

Great choices, sadly I havent read any of them, but some of them are on my list.
New follower from Beck Valley books blog hop!

Kris
A book from Snowy River

Following you back from the hop! MamaLuvsBooks.com! Can't wait to look around your site!