The second line of the prologue contains a throwaway cancer joke that momentarily stopped my breath, but Quentin "Q" Jacobsen is no Augustus Waters, and Margo Roth Spiegelman is no Hazel Grace Lancaster. (Same number of syllables in her case, but there the similarity ends.) I mean that in a good way! The actor who plays Q in the movie version, Nat Wolff, is the same actor who played Isaac in The Fault in Our Stars. But never mind that - aside from their author, the two books have little in common.

While TFIOS is decidedly a love story, PT deals with the issue of how we represent other people in our minds. We all see other people through the lens of our personal experience with them. Q learns that each of Margo's friends has his or her own version of Margo and that there were many sides to her he hasn't considered.

The tool that allows Q to discover these facets of Margo is Walt Whitman's Leaves of Grass. I love the idea that this novel may get younger readers excited about Walt Whitman's poetry. Some of it is quite remarkable. I've always admired Whitman's ability to make the reader feel connected to him as a human being, despite the fact that he died in 1892. 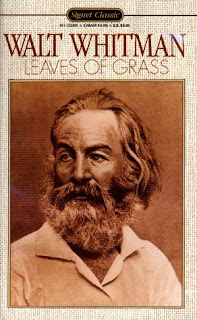 Also there is something about Moby Dick. Like Q, I did not read Herman Melville's dense symbolist tome. I understand Green is referencing Captain Ahab's white whale when Q's life is nearly ended by a pure-white cow, but I lack the ability to compare all the moments in this novel that may resonate with Melville's masterpiece. Once again, I'd like to express my gratitude to my 11th grade American Lit teacher, the late Mr. Tom Gerencher, for having us read ONLY Billy Budd and not Melville's longer, more famous work.

Classic American literature fuels this literary journey, with references to Emily Dickinson, Henry David Thoreau, Sylvia Plath, and Kurt Vonnegut (Green's fellow Hoosier, and mine) sprinkled in. As an American Lit nerd, I enjoy this very much. The greatest thing is that Green's American Lit references seem organic, not forced and/or pedantic. Q is a bit of a lit nerd, too. In that way, he does share similarity to the well-read Augustus. Possibly a bit of the creator sneaks into the creations.

I should really watch a few more Vlog Brothers videos. I really don't know that much about John Green as a person. I've only picked up a few of his thoughts and mannerisms from bits on Tumblr and Pinterest.


(Okay, that's John Green's younger brother Hank, but to be fair Hank IS the other Vlog Brother.)

Note, too, that Margo's last names each reference notable American authors - Philip Roth and Art Spiegelman. Both are noted for chronicling the lives of American Jews. Both Q and Margo are Jewish characters, but their ethnicity and/or religion (it's not clear that either the Roth Spiegelmans or the Jacobsens practice religious Judaism) don't make up a very important part of the novel. Therefore, I don't read too much into the characters being Israeli-Americans.

I really liked this book. Not quite 5 stars for me, but a solid 4.5. It didn't make me cry, unlike a certain other book I could name that made me cry, then drop it on the floor, then call it a stupid book for making me cry and drop it. An excerpt from that certain book appears in the end of my paperback. I reread the excerpt. Then I got emotional about Augustus Waters' fictional existence. John Green, quit playing games with my heart.

I purchased Paper Towns with my own funds from Forever Books in St. Joseph, Michigan. I was not obligated in any way to review it. This review represents my own honest opinion.
Posted by Erin O'Riordan at 11:39 PM