Thoughts on 'Go Set a Watchman'

On Thursday, August 13th, Mr. Elingtin and I visited the Kurt Vonnegut Memorial Library at 340 N. Senate Avenue, in the heart of downtown Indianapolis, Indiana. The book I took with me to read in the car was Go Set a Watchman by Harper Lee. It is the second novel she published, although she wrote it before her iconic To Kill a Mockingbird. 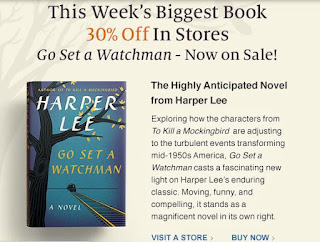 The docent at the Kurt Vonnegut Memorial Library told me he was still deciding whether or not to read this book. I understand this impulse. From the moment those of us of a literary bent read the first chapter as published in the Wall Street Journal, it was apparent our long-serving image of Atticus Finch as a force for colorblind morality would be altered by his character development in this book.

I read To Kill a Mockingbird once, either in the sixth or seventh grade, as assigned to me in junior high. I liked the book then and it's stayed with me ever since.  I think many people who didn’t conform to strict gender stereotypes have identified with the tomboyish Jean Louise “Scout” Finch over the years. I’m among them. (I’m not the most “girlish” of girls, although I do love glitter and pink things.)

I decided before GSAW came out that I would have to have it immediately. To that end, during my lunch hour on Tuesday, July 14, I went to Forever Books and paid full retail price for a brand-new hardcover copy. I had, after all, waited more than 20 years for a second Harper Lee novel. (It wasn't the longest possible wait, since the novel was originally published in 1960, the year my parents each turned 8.) As soon as I finished Paper Towns, I started GSAW.

Titular Allusion: The Jewish Bible, Isaiah 21:6. In the King James version, “For thus hath the Lord said unto me, Go, set a watchman, let him declare what he seeth.” In the novel, the watchman is literally a “citizens’ council” of highly dubious intent and, figuratively, Scout’s conscience. 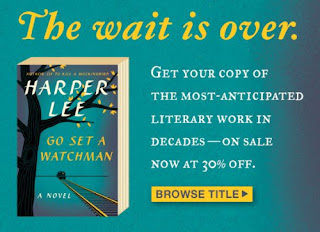 The bit of character development that Scout Finch – aged 26 – undergoes in the novel is discovering that the father she idolizes has feet of clay. He belongs to the citizens’ council whose purpose is to counter the actions of the NAACP, and he sits by, tacitly affirming its virulently racist rhetoric.

Scout’s reaction to learning about her father’s hidden racism is to become violently physically ill, take to bed for 12 straight hours, then to lash out at the members of her family who approve of what she considers morally abhorrent behavior. Scout’s natural instinct, nurtured in her by Atticus during the first 25 years of her life, is to judge people by the content of their character and not by the color of their skin.

While many will be disappointed with Atticus in his old age, one could make the case that Scout remains essentially the same person she was at age 10 (her age in TKAM, set in the mid-1930s). She’s still stubborn, independent, not overly burdened by societal views of traditional femininity, brilliant, creative, and empathetic. Atticus has changed, but Jean Louise is still the Scout we know and love.

Another of the pleasures of this novel is in its several flashbacks to the 1930s, when Scout was still a girl and her older brother Jem was still alive. (We learn he’s died suddenly from the same heart defect that killed the Finch children’s mother.) These are highly amusing, including an incident in which Scout fundamentally misunderstands where babies come from and plans to kill herself, under the mistaken impression that she’s pregnant.

In another great scene, Scout, Jem, and their summer neighbor Dill (whom Lee based on Truman Capote – another author of American classics, although sadly he is no longer with us, unlike Ms. Lee) play a game of pretend. They pretend to have a religious revival, much to the dismay of Dill’s aunt/temporary guardian. She catches Dill dressed as the Holy Ghost (wearing a bed sheet with eye holes cut out) and attempting to baptize the Finch children in a goldfish pond. Atticus, as it happens, had the pastor over to dinner that night, but rather than being dismayed by his children’s antics, Atticus merely conceals himself on the back porch to laugh out of the pastor’s earshot.

So, although it has us rethinking everything we thought we knew about the moral character of Atticus Finch, I say go ahead and read Go Set a Watchman. It’s still a pleasure to spend further time with Scout Finch. Some will also be able to make the case that Calpurnia’s character is developed in further depth than the way we saw her in To Kill a Mockingbird. 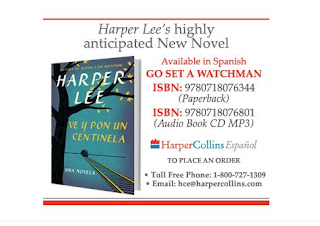 Sidebar: Truman Capote died in 1984 (I was 7) in the midst of a battle with liver cancer, compounded by years of alcohol and drug abuse. I remember reading “A Christmas Memory” in elementary school and being disappointed to learn that Capote was no longer living. Visiting my classroom during this discussion the school principal, Mr. John Farthing, told us (non-judgmentally) that Capote was gay. He recounted to us a bit about the famous Black and White Ball and Capote’s flamboyant personality. I read Breakfast at Tiffany’s shortly after that. I still have my first copy.

By the way, one may also visit the preserved mid-Victorian home of the poet James Whitcomb Riley while visiting Indianapolis. I haven’t, and I fear it would bore Mr. Elingtin to death if I did.

We did, however, go to the Indiana State Fair. Neither of us had ever been to it before. It had everything you’d expect an agricultural fair to have, including an enormous number of booths serving foods of questionable nutritional value. Okay, I admit it: I had a sandwich made with a pressed pork patty, dill pickles, and barbeque sauce. (It wasn’t great. I’d have been better off with a nice Greek salad or even some fried okra from the Jamaican food booth. I’d also considered some French-style beignets and/or a peach cider slush.)

The Kurt Vonnegut Memorial Library is small, but worth visiting. I got to type on Vonnegut’s personal typewriter, as visitors are encouraged to do. The current exhibit focuses on the Mother Night film, and a typewriter belonging to Nick Nolte is on loan, but visitors are not allowed to type on it.

Interesting thoughts. Thanks for posting. I don't think I'll read the new book. For me, it's one of those things best left as is.
Nice that you focused on Scout. Maybe one of the effects of the new book will be to return the focus on her, and away from Atticus ( who has become more prominent in many people's minds, including mine, because of Gregory Peck).
I liked the very end of your post. I wonder what makes Nick Nolte so special.

Thanks for commenting, Mark. I probably should have mentioned that Nick Nolte starred in the movie version of 'Mother Night.'