I am brimming with literary excitement at the news that J.K. Rowling's post-The Cuckoo's Nest project is a screenplay based on Fantastic Beasts and Where to Find Them. It won't just be one film, but a new series. Never has there been a more appropriate time for a Potterhead "Squee!"

What I Thought of Dan Brown's Book

But more news on that as it develops. Right now, let's talk about Dan Brown's 2013 release, Inferno. I got this book at the library and was not compensated for this review in any way; it represents my own honest opinion.

When I read a Dan Brown novel, I have certain expectations:

*Robert Langdon will be man's fantasy hero, a frumpy middle-aged professor who attracts a hot, brilliant, much-younger love interest - check. (It's okay. Middle-aged men are allowed to have their fantasies, too.) In this volume, her name is Dr. Sienna Brown. The plot involves Langdon having amnesia, which is entirely appropriate, because at the beginning of each new book he has completely forgotten about the heroine of the previous novel. Vittoria who? Sophie what? Katherine hmm? In Dan Brown's imagination, female characters have very short shelf lives.

One billion bonus points to whoever writes a spin-off series in which Vittoria Vetra, Sophie Neveu, Katherine Solomon and Sienna Brown team up and solve a mystery on their own. Maybe with one brief consultation with Langdon.

Incidentally, I want to know Vayentha's whole back story, starting with what her name means.

*Historically- and culturally-rich locations? Check. In this volume, we spend most of our time in exotic Florence, the birthplace of Dante Alighieri, then travel to that hotbed of Italian intrigue, Venice, then to Istanbul. This is probably the most fun part of any Dan Brown novel - the vicarious travel.

*Horrifying vandalism of a priceless world heritage artifact? Check. This time, it would be Dante's death mask.

*Tantalizing hints of a conspiracy theory, without suggesting that any living person, government or corporation is guilty of anything we should concern ourselves with? Check.

Because I got exactly what I expected out of this book, I wasn't disappointed. My favorite will probably always be The Da Vinci Code, because as one inclined toward worship of a deity in feminine form, I never related to Robert Langdon quite so much as when he reverently knelt at the grave of Mary Magdalene. Goddess worship in mainstream fiction? More, please!

I quite enjoyed Angels and Demons as well, which I thought was pleasantly suspenseful, and that's probably still my second favorite, but I liked Inferno better than The Lost Symbol, if for no other reason than that Istanbul is more fun to explore than Washington, D.C.

The ending's a little weird. Without spoiling too much, I think I can say that the bad guy kinda wins, and there's really nothing anybody can do about it. The characters in the novel are kinda okay with it, too. What happens is an extreme solution to the world's supposed population crisis, and if this were to happen in real life, it would be absolutely heartbreaking. It's not really a happy ending at all. I wonder where Dan Brown will go next.

Issues Raised By This Book

Let it be said that in real life, while the population crisis that Brown addresses does involve some serious environmental concerns that I believe are fact-based, there's something that's never addressed: much of the human misery that's allegedly caused by "overpopulation" isn't really due to overpopulation, it's due to unequal distribution of resources. For example, we currently have enough food to feed everyone in the world - that's not why people go hungry. People go hungry because governments don't have the political will and/or the infrastructure to get food to the people who need it the most.

Also, we're not doing everything we could be doing to make our limited resources last longer. If more of us were vegetarians or semi-vegetarians (meat once a week, maybe), we could take the land we use for raising animals and the land that grows animal feed, eliminate the middleman (middle being, in this case) and feed that grain directly to ourselves instead of animals raised for slaughter. As the food-animal population gradually dwindled, we could turn grazing lands and feed lots into more land for growing grains and/or more housing for human beings. People in industrialized nations can live much-simplified lives to help people all around the world have access to more resources, if we had the collective will to do it.

It is pretty shameful that about half of pregnancies in the U.S. are unplanned, though. I've read that statistic elsewhere besides in this novel. I'm childless by choice, but you know, it was never that hard for me and my husband to avoid parenthood. Is it lack of sexual education that prevents other couples from enjoying the same freedom? That's sad. Sexual education for everyone before they reach the age of 14, please. Parenthood only by free, conscious choice, and all babies wanted babies - let's make that happen! "Accidentally pregnant" should not be the default setting for a human woman in the 21st century.

So as you can see, this book raises interesting issues far beyond the needs of mere fictional storytelling.

I read Inferno in novel class, which was a class I took the first semester of my senior year of high school - that would have been 1994. It's been quite a while. We had an Italian exchange student that year, Gabriel Violi. (My friend Sarah played viola, and every time I said "viola" he thought I was calling his name.) He read us some of the pages in Dante's original Italian, but he made sure we knew it was very strange, old-fashioned Italian. Also, he didn't speak Italian much in his day-to-day life, preferring to use his regional dialect (I forget which one) at home.

Speaking of the storytelling, though, there were a few moments that took me out of the story. One was the mention of the devil's three mouths in Dante's Inferno. Langdon was supposed to have not only read and studied The Divine Comedy (Inferno, Purgatorio, and Paradiso) but also lectured on its symbols at Harvard. He gives some explanation for why the devil, in the lowest circle of hell, has three mouths in Dante's depiction, and later there's a mention of Judas Iscariot, but the other two traitors depicted as being in the lowest circle of hell, Brutus and Cassius (the murderers of Julius Caesar) are never mentioned. Why didn't he just say that the devil has one mouth for each of the three traitors, to take bites out of them? 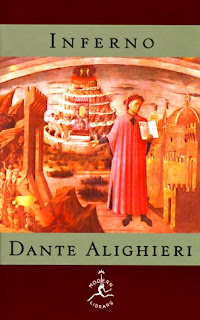 That was a very minor issue I had. I bristled a little more when Langdon said, "They're called chthonics because they reside in the underworld and are associated with hell." (That weird word "chthonics," with a silent "ch," just means "subterranean.") No, Robert Langdon, "the underworld" and "hell" are concepts from two different cultures that shouldn't be confused, and you would know that better than anyone. The ancient Greeks and Romans believed in an underworld in which exceptional individuals might be slightly rewarded (in Elysium), but in general, dead human beings were not punished. They simply existed as memoryless shades. "Hell" is an underworld specifically for punishment of evil human beings who have died, and it's a concept from Zoroastrianism first and, later, Christianity. There wasn't a culture that thought the Greco-Roman underworld was hell, or that hell was the Greco-Roman underworld.

And Robert Langdon would definitely know that. He's far too academic to let something like that slide. But again, that's a pretty minor point.

One more thing about chthonic beings: late in the novel, Sienna and Langdon are talking about them, and Sienna says, "Medusa and the entire class of chthonic deities live underground because they're associated directly with Mother Earth. In allegory, chthonics are always symbols of--" And Langdon finishes her thought with, "Fertility." Human fertility was what the antagonist of the novel feared the most; hence his extreme solution. But what Dan Brown isn't really an explanation of why underworld deities and beings are associated with fertility, and there's another thing he isn't quite saying about the red underworld cistern of Langdon's visions (which turns out to be a place in Istanbul).

So I'll tell you, with the help of my trusty The Woman's Encyclopedia of Myths and Secrets by Barbara G. Walker. Red, underground water? That's the womb of the goddess, filled with her wise blood. Mother Earth is our mother because we came out of her womb - a dark, hidden, earthy space that encloses us fully - her underground caves. Robert Langdon is looking for the Holy Grail yet again - the Goddess's vessel or cauldron, her womb. Life starts there, and when we die, we go back into the earth, buried yet again in the Goddess's womb - from whence we could be reborn. That's the Pagan circle of life: birth, death, burial, rebirth.

Under cauldron, Walker writes, "Among the Celts of Gaul and Britain, the Cauldron of Regeneration was the central religious mystery: reincarnation within the womb of the Goddess" and "Each Celtic temple had its sacred cauldron."

Finally, the last word of this book is "stars." If you know The Divine Comedy, then you'll know why the last word in the book had to be "stars."

Erinyes by George Saoulidis. $4.99 from Smashwords.com
When a sheltered teenager starts noticing a hazy face following her in her photographs, she begins to investigate an urban legend. But will she uncover the truth when she gets in trouble with a technology corporation, when an enigmatic hacker starts telling her conspiracy theories and when the hazy face becomes all too real and starts chasing her non-stop?
Posted by Erin O'Riordan at 2:59 PM