Yesterday we talked about Mabon; today I'll focus on a Northern European goddess strongly associated with the grain harvest, an ideal archetypal figure for a fall holiday of thanksgiving. We can learn a little about this Norse goddess, often simply referred to as "the wife of Thor" (typical patriarchy! to honor a goddess only as far as her relationship to a male divinity), from a beautiful old book I rescued from a library book sale.

This book, first published in 1957, is called The Lost Gods of England by Brian Branston (not to be confused with Breaking Bad actor Bryan Cranston!). It's all about the religious-mythological system of the British Isles during the Anglo-Saxon period, which it appears was something of a mash-up between traditional Norse mythology and Celtic mythology. The two cultures had some similarities anyway, because all Indo-European pantheons can be traced back to the very ancient religion of the Indian subcontinent.

Sif's brief article at Encyclopedia Mythica will tell you the story of how Loki sneaked into Sif's bedroom and cut off all her golden hair. The crime was investigated by Veronica Mars - no, I'm just kidding. Thor threatened to pull an Incredible Hulk on Loki unless Loki found a way to replace the hair. The ever-resourceful trickster god went to some dwarves, who spun gold into replacement locks, which Loki then magically attached to Sif.

Lost Gods is slightly more instructive. Slightly. Sif comes up four times. The first time is on page 117 of my edition, which teaches us that the Anglo-Saxon counterpart of Thor, called Thunor, is associated with agriculture, which "make[s] for a fertility element to his cult...He is married to the golden-haired goddess Sif, the northern Ceres, another manifestation of Mother Earth." Ceres, of course, is the Roman equivalent of the Greek grain-goddess Demeter, the mother of Persephone.

She comes up again on page 123, in the myth of how Thor once fought a stone giant named Hrungnir and ended up with a piece of stone embedded in his skull. The original source for this tale is the famous Icelandic poet and politician Snorri Sturluson, who lived in the 12th and 13th centuries. Christianity came to Iceland around the year 1000, and by Snorri's time, the Norse religion was no longer the dominant one. But I digress - this myth says only that Hrungnir threatened to abduct both Sif and Freya.

The third reference, on page 128, is similarly brief; Branston merely asserts that Freya and Sif are the same goddess, and so is Frig.

The final reference, on page 145, takes the tale of how Sif lost her hair as a metaphor - our old favorite, the agricultural metaphor of the Annually Dying and Returning God and his mother/lover who is Mother Earth. The loss of hair is the loss of the lover ("death" of the harvested crops), and its return is the lover's return (springtime growth of new crops from seeds planted in autumn). Branston cites another version of this myth from the Norse canon. In it, Loki steals the Brisingamen (a really fancy piece of jewelry) from Freya.

Heimdall, the guardian of the godly realm of Asgard who controls the rainbow bridge, Bifrost, transforms himself into a seal selkie-style and swims out to the rock on which Loki has stashed it, and after a battle with Loki, retrieves it for the beautiful goddess of sex and death. 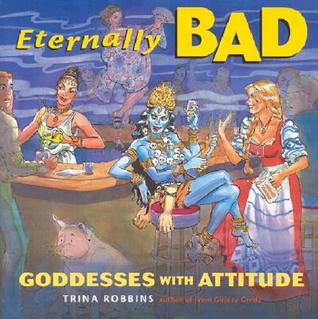 If you read Eternally Bad: Goddesses With Attitude by Trina Robbins, as I did many years ago, you'll read a slightly different twist on the story of Freya and the Brisingamen. In it, Freya offers her sexual services to the dwarves, whose craftsmanship produced the shining jewel (a necklace, in Robbins' telling). From this bawdy Norse myth descends the Western European folk tale of Snow White. Oddly enough, by the 20th century this was regarded as such an innocent children's tale, Walt Disney turned it into the first full-length animated Disney movie.

Did you wonder why the seven dwarves worked in a diamond mine?

Trina Robbins also wrote The Great Women Superheroes, which my brother bought me one Winter Holidays. It doesn't mention the Marvel Comics version of Sif. (It does, however, mention The Valkyrie, briefly a member of the Marvel "superteam" The Defenders in the 1970s.) But if you saw the 2011 movie Thor, you may remember that Sif was a character - played by a distinctly brunette actress (Jaimie Alexander). If you were a fan of that movie, you've probably already seen this.

Thor: The Dark World is scheduled for a November 2013 release. The Marvel comic book character Sif, according to the Marvel Universe wiki, first appeared in 1964. In this version of the loss of Sif's golden hair, Loki was overeager to get the replacement hair to the goddess, and over time it darkened from shining gold to jet black. The first Thor film ends with the god's mortal beloved, scientist Jane Foster (played by Natalie Portman), waiting on earth for Thor while he remained in Asgard. In the comics, Thor and Jane have a fairly brief relationship, Odin has long approved of Sif as a mate for Thor, and Thor and Sif get engaged (although they've never been married in the Marvel Universe}. Jane and Sif never come up in the next Marvel film to feature Thor and Loki, The Avengers (2012), but it's possible there may be a bit of a love triangle in The Dark World. Loki has a wife, Sigyn, both in Norse mythology and in Marvel Comics, but she isn't in the film franchise. That's because the filmmakers want Loki to be a single guy, because they know he is attractive to women. Like me. I love Tom Hiddleston as Loki, and I think Idris Elba is absolutely gorgeous with the golden eyes he has when playing Heimdall. Of course, Idris Elba is absolutely gorgeous reading the phone book, or sitting in traffic, or naked on the roof of the Empire State Building eating an Eskimo Pie. (Yeah, I reached way back into the '90s for that reference.) Did I have a point here? Ah, yes - Mabon. The mythological Sif is a great goddess to celebrate at the harvest time because she's a fertility goddess whose golden hair represents the golden sheaves of wheat, or corn, or whatever grain you have that's ripened to a golden brown in the autumn. The sexual pairing of Sif and Thor assures the fertility of the crops. We can also think of Thor and Loki - the fair-haired brother and the dark-haired brother - as archetypes of the Oak King (Thor) and the Holly King (Loki). At Mabon, Loki's powers are starting to decline. At the Winter Solstice - Yule - Loki has his final fling as Lord of Misrule and then becomes the yearly sacrifice of a warrior that Hel (underworld goddess - Loki's daughter, incidentally) demands. Thor will rule until the Summer Solstice, when they'll once again switch places. Eternally. Or at least until Ragnarok, when Loki's monstrous child the Midgard Serpent and Thor kill one another. *This person is Mr. Ian Johnston of Bon Bon Books, Cottenham, Cambridgeshire, U.K. Bon Bon is one of the two bookshop dogs, both Cairn terriers. The other is named Robbie. I only mention it because it makes a charming footnote. Compare Selected Works and its bookshop cat. This is an affiliate link:

League of Super Heroes: Rise of the Villain (#1) (Party Game Society Hit Party Game) by Celeste Ayers. $2.99 from Smashwords.com The League of Super Heroes HQ is under attack! A Super Hero went missing last night. Looks like someone is out for blood… someone is killing heroes… but who? Who amongst you has turned from Super Hero to Super Villain? It’s time to suit up and take control of this evil once and for all. The fate of the world is at stake. Will the good guys be victorious in sniffing out the tyrants?