As chosen by Random.org, the winner of the two paperbacks in my Vampires for Valentines is...Denise Z! I'll be e-mailing you with a request for the address to which the books should be sent. Anne, you won the romance paperbacks giveaway.

I was thrilled last week when I read Nola Cancel's article stating that Imagine Entertainment, Ron Howard's company, has optioned Anne Rice's fourth Vampire Chronicles novel, The Tale of the Body Thief for possible production. The word that comes to mind is "Squee!"

This has inspired me to watch the first two film based on the Chronicles. I enjoyed Interview with the Vampire - but not the Guns 'N Roses cover of the Rolling Stones classic "Sympathy for the Devil."

This should be the theme song instead:

Not quite as entertaining, but still interesting, is Queen of the Damned, starring Aaliyah and Stuart Townsend. I don't love all the music in this; I'm no more a fan of Korn (whose lead singer acted as composer) than I am of G&R. I do like one song, though: The Deftones' "Change." In "Oakley Falls," I used this as Oakley's intro music.

This clip won't play on this blog, but it does link to YouTube, and you can see it there.

BUT it does bother me a tiny bit that Stuart Townsend is clearly brown-eyed, while book-Lestat has gray eyes. I'm not sure if the first movie had Tom Cruise wear contacts, but he seems to have naturally blue eyes. Blue is much closer to gray than brown is.

The non-Queen of the Damned version of the "Change" video will play here.

Sorry, Edward, but this is too good to resist. This comes courtesy of Rhiannon Mills. 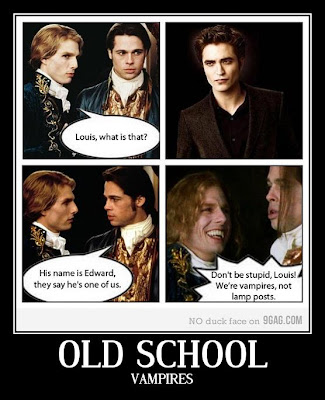 The First Bite Is the Deepest by Elisa Catrina. $2.99 from Smashwords.com
“Funny and clever and emotionally hard-hitting” "A perfectly creepy read." Elisa Catrina's debut novel begins as a quirky send-up of vampire romance, but quickly turns sinister. High schooler Stella Ortiz starts dating the mysterious new guy, but her friends are convinced he's bad news: Sebastian misses tons of school, he day-drinks something that smells like pennies, and oh yeah, he's a vampire.
Posted by Erin O'Riordan at 7:55 AM

LOVE LOVE LOVE Anne Rice ... she really knew how to capture the raw, sexuality of the vampire. Made you WANT to be one of the victims.

Thank you so very much for the win of these awesome treats. I definitely have to revisit these flicks :)

You're welcome, Denise! I appreciate you entering the contest.

I agree, Rodney - and Rice's vampires themselves don't even have sex! I've always been partial to Armand.