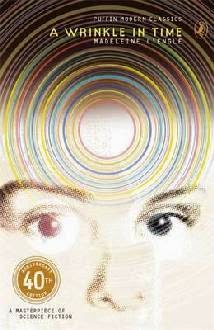 One of my very favorite books when I was actually in the young adult target audience - 12 years old or so - was Madeleine L'Engle's A Wrinkle in Time. It's a little bit fantasy and a little bit science fiction. Its protagonist is Meg Murry, a smart but socially awkward girl with whom I strongly identified.

In 2003 we got the A Wrinkle in Time TV movie. It wasn't great, but it was better than nothing.


Meg Murry is played by Katie Stuart, a Canadian actress perhaps best known for the CW drama series The 100. It only lasted one season, but I didn't mind that so much, because I'd rather have Paige Turco playing her recurring role as Zoe Morgan on Person of Interest than on some CW show. Stuart also made a single appearance on Supernatural, as a comic book store clerk.

For me, the best performances in the WIT movie are by Alfre Woodard as Mrs. Whatsit and Kyle Secor as The Man With Red Eyes. The red-eyed man is a detestable representative of pure evil, but Kyle Secor is still my sweet, sweet baby. Even post-Veronica Mars I can't hate him, because he'll always have played Timothy James Bayliss on Homicide: Life on the Streets. Detective Bayliss remains one of the few canon!bisexual fictional characters on mainstream U.S. TV series.

Netflix recently added The Gilmore Girls. I've seen the first four seasons or so, but never finished the series. I'd love to revisit it...but I can only watch it when Tit Elingtin isn't around. Lorelei Gilmore's mom, Emily, reminds Tit of my mom - his mother-in-law - and he gets upset at my mom. I can't have a TV series causing me family discord. It's just not worth it.

Given my recent Destiel fixation, it's only natural that I occasionally remember Jared Padalecki as Dean Forester. Wouldn't young!Jared have made an excellent Calvin O'Keefe? He's neither red-haired nor blue-eyed like the book character, and it's Jensen Ackles who can lay claim to the most freckles, but these details are minor.

In my overactive imagination, Dean and Rory would make an excellent Calvin and Meg. 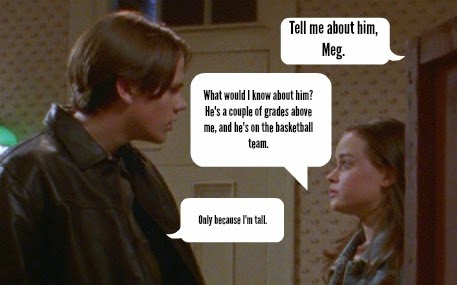 Charles Wallace: Tell me about him, Meg.

Meg: What would I know about him? He's a couple of grades above me, and he's on the basketball team.

Calvin: Only because I'm tall. 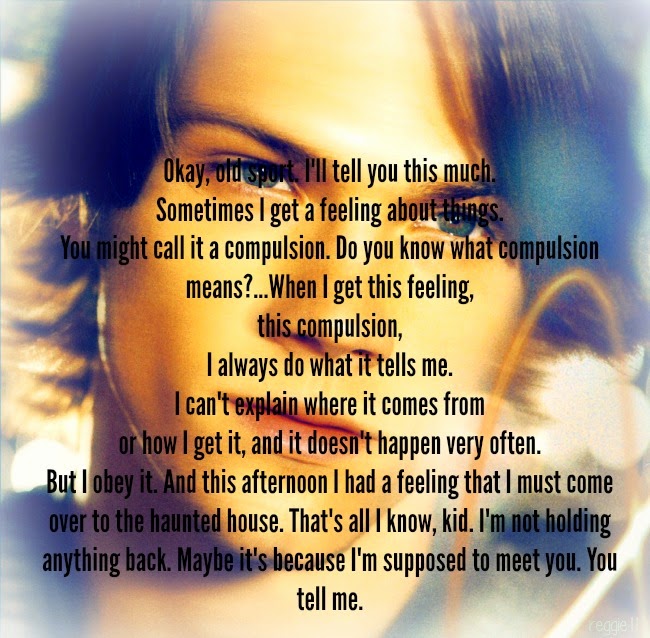 Calvin: Okay, old sport. I'll tell you this much. Sometimes I get a feeling about things. You might call it a compulsion. Do you know what compulsion means?...When I get this feeling, this compulsion, I always do what it tells me. I can't explain where it comes from or how I get it, and it doesn't happen very often. But I obey it. And this afternoon I had a feeling that I must come over to the haunted house. That's all I know, kid. I'm not holding anything back. Maybe it's because I'm supposed to meet you. You tell me. 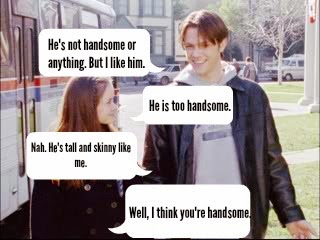 Calvin: He's not handsome or anything. But I like him.

Meg: He is too handsome.

Meg: Well, I think you're handsome. 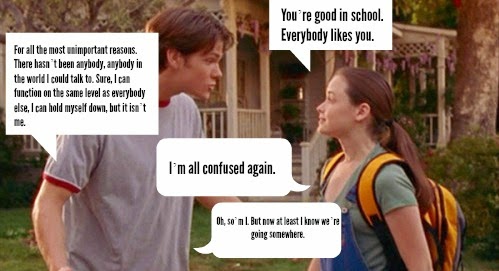 Meg: You’re good in school. Everybody likes you.

Calvin: For all the most unimportant reasons. There hasn’t been anybody, anybody in the world I could talk to. Sure, I can function on the same level as everybody else, I can hold myself down, but it isn’t me.

Calvin: Oh, so’m I. But now at least I know we’re going somewhere. 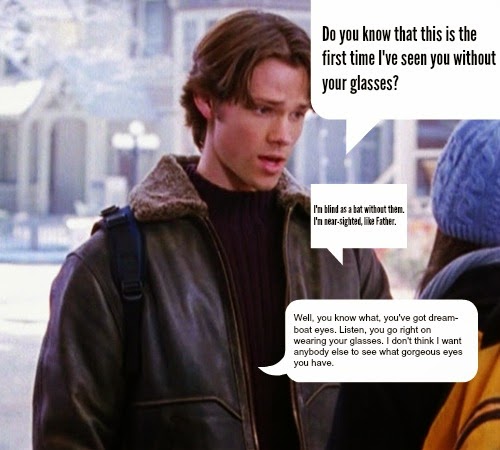 Calvin: Do you know that this is the first time I've seen you without your glasses?

Meg: I'm blind as a bat without them. I'm near-sighted, like Father.

Calvin: Well, you know what, you've got dream-boat eyes. Listen, you go right on wearing your glasses. I don't think I want anybody else to see what gorgeous eyes you have. 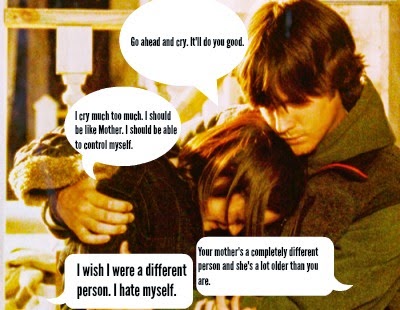 Calvin: Go ahead and cry. It'll do you good.

Calvin: Your mother's a completely different person and she's a lot older than you are.

Meg: I wish I were a different person. I hate myself. 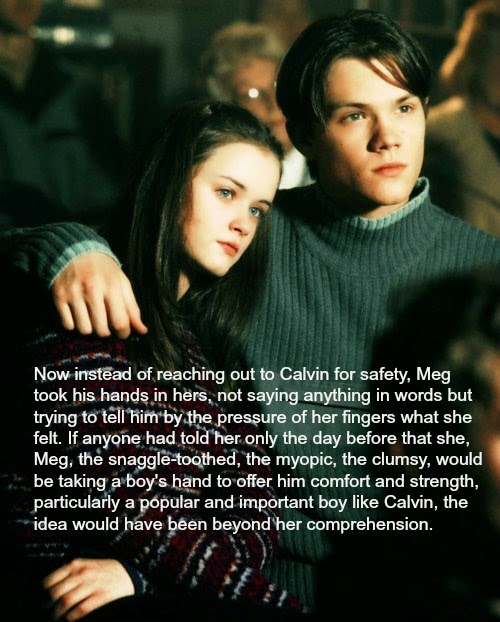 "Now instead of reaching out to Calvin for safety, Meg took his hands in hers, not saying anything in words but trying to tell him by the pressure of her fingers what she felt. If anyone had told her only the day before that she, Meg, the snaggle-toothed, the myopic, the clumsy, would be taking a boy's hand to offer him comfort and strength, particularly a popular and important boy like Calvin, the idea would have been beyond her comprehension." 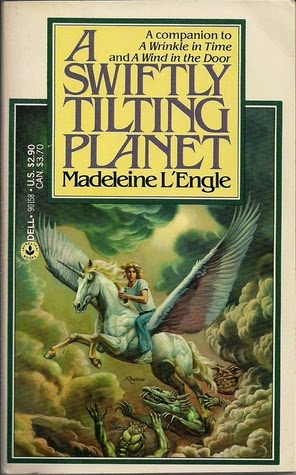 When he is 14, Calvin's home life is rather sad. The O'Keefes have 11 children in all; Calvin is somewhere in the middle. (I think he has two older siblings.) His mother is an unpleasant woman who beats her children. She's like Peeta Mellark's angry, abusive mother in The Hunger Games. But...

SPOILER ALERT! When one gets to the third book in the series (and by the way, I've never finished reading any of the sequels, although I took a stab at the second one once), nine years after A Wrinkle in Time, Calvin and Meg are married and she's pregnant with their first child. The third book is called A Swiftly Tilting Planet. I think Meg becomes a physicist like her parents, and I know Calvin becomes a marine biologist. For some reason I think the total number of children they have is seven.
Posted by Erin O'Riordan at 7:07 PM