Pride and Prejudice and Person of Interest: A #JaneAusten Birthday Mash-up

Happy birthday to my literary foremother Jane Austen, born December 16, 1775! If you are ever eager to read more about the brilliant English novelist, here are some Pagan Spirits blog posts you might enjoy:

It's another thing, too: Joss Carter Appreciation Week. This event is to be held December 15-22 in honor of the emotionally-devastating loss of one of TV's greatest female characters from Person of Interest. Since two great things can sometimes taste great together, I now present a short mash-up I like to call "Pride and Prejudice and Person of Interest:"


Josselyn was suddenly roused by the sound of the doorbell; and her spirits were a little fluttered by the idea of its being Colonel Finch himself, who had once before called late in the evening, and might now come to enquire particularly after her. But this idea was soon banished, and her spirits were very differently affected, when, to her utter amazement, she saw Mr. Reese walk into the room. In a hurried manner he immediately began an enquiry after her health, imputing his visit to a wish of hearing that she were better. She answered him with cold civility. He sat down for a few moments, and then getting up walked about the room. Josselyn was surprised, but said not a word. After a silence of several minutes, he came towards her in an agitated manner, and thus began:--

"In vain have I struggled. It will not do. My feelings will not be repressed. You must allow me to tell you how ardently I admire and love you. Also, you look kind of badass in that uniform.” 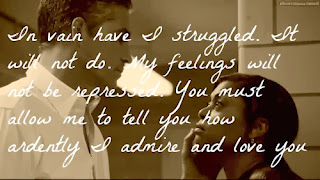 Josselyn's astonishment was beyond expression. She stared, doubted, and was silent. This he considered sufficient encouragement, and the avowal of all that he felt and had long felt for her immediately followed. He spoke well, but there were feelings besides those of the heart to be detailed, and he was not more eloquent on the subject of tenderness than of pride. His sense of her being an officer of the law, of its being a detriment to his continuing illegal activities, were dwelt on with a warmth which seemed due to the consequence he was wounding, but was very unlikely to recommend his suit.

In spite of her deeply-rooted sense of justice, she could not be insensible to the compliment of such a man's affection, and though her intentions did not vary for an instant, she was at first very sorry for the pain he was to receive; till, roused to resentment by his subsequent language, she lost all compassion in anger. She tried, however, to compose herself to answer him with patience, when he should have done. He concluded with representing to her the strength of that attachment which, in spite of all his endeavors, he had found impossible to conquer; and with expressing his hope that it would now be rewarded by her acceptance of his hand. As he said this, she could easily see that he had no doubt of a favourable answer. He spoke of apprehension and anxiety, but his countenance expressed real security. Such a circumstance could only exasperate farther; and when he ceased, the colour rose into her cheeks, and she said,--

“In such cases as this, it is, I believe, the established mode to express a sense of obligation for the sentiments avowed, however unequally they may be returned. It is natural that obligation should be felt, and if I could feel gratitude, I would now thank you. But I cannot--I have never desired your good opinion, and you have certainly bestowed it most unwillingly. I am sorry to have occasioned pain to anyone. It has been most unconsciously done, however, and I hope will be of short duration. The feelings which you tell me have long prevented the acknowledgement of your regard can have little difficulty in overcoming it after this explanation.” 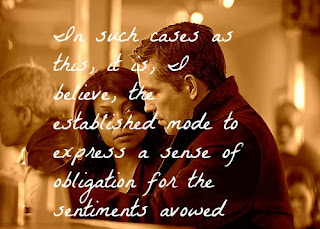 Mr. Reese, who was leaning on the mantel-piece with his eyes fixed on her face, seemed to catch her words with no less resentment than surprise. His complexion became pale with anger, and the disturbance of his mind was visible in every feature. He was struggling for the appearance of composure, and would not open his lips till he believed himself to have attained it. The pause was to Josselyn's feelings dreadful. At length, with a voice of forced calmness, he said:

"And this is all the reply which I am to have the honour of expecting! I might, perhaps, wish to be informed why, with so little endeavour at civility, I am thus rejected. But it is of small importance."

"I might as well inquire," replied she, "why with so evident a desire of offending and insulting me, you chose to tell me that you liked me against your will, against your reason, and even against your training as an assassin? Was not this some excuse for incivility, if I was uncivil? But I have other provocations. You know I have. Had not my feelings decided against you—had they been indifferent, or had they even been favourable, do you think that any consideration would tempt me to accept the man who has been the means of ruining, perhaps forever, the happiness of my most beloved partner, Detective Fusco?"

As she pronounced these words, Mr. Reese changed colour; but the emotion was short, and he listened without attempting to interrupt her while she continued:

"I have every reason in the world to think ill of you. No motive can excuse the unjust and ungenerous part you acted there. You dare not, you cannot deny, that you have been the principal, if not the only means of dividing my partner from your partner Miss Shaw—of exposing one to the censure of the world for caprice and instability, and the other to its derision for disappointed hopes, and involving them both in misery of the acutest kind." 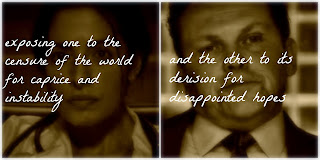 She paused, and saw with no slight indignation that he was listening with an air which proved him wholly unmoved by any feeling of remorse. He even looked at her with a smile of affected incredulity.

"Can you deny that you have done it?" she repeated.

With assumed tranquillity he then replied: "I have no wish of denying that I did everything in my power to separate my partner from your partner, or that I rejoice in my success. Towards Shaw I have been kinder than towards myself."

Josselyn disdained the appearance of noticing this civil reflection, but its meaning did not escape, nor was it likely to conciliate her.

"But it is not merely this affair," she continued, "on which my dislike is founded. Long before it had taken place my opinion of you was decided. Your character was unfolded in the recital which I received many months ago from Leon Tao. On this subject, what can you have to say? In what imaginary act of friendship can you here defend yourself? or under what misrepresentation can you here impose upon others?"

"You take an eager interest in that gentleman's concerns," said Reese, in a less tranquil tone, and with a heightened colour.

"Who that knows what Mr. Tao’s misfortunes have been, can help feeling an interest in him?" 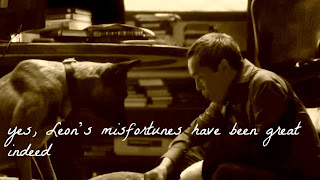 "And of your infliction," cried Josselyn with energy. "You have reduced Mr. Tao to his present state of poverty—comparative poverty. You have withheld the advantages which you must know to have been designed for him. You have deprived the best years of his life of that independence which was no less his due than his desert. You have done all this! and yet you can treat the mention of his misfortune with contempt and ridicule."

"And this," cried Reese, as he walked with quick steps across the room, "is your opinion of me! This is the estimation in which you hold me! I thank you for explaining it so fully. My faults, according to this calculation, are heavy indeed! But perhaps," added he, stopping in his walk, and turning towards her, "these offenses might have been overlooked, had not your pride been hurt by my honest confession of the desire to continue my criminal kneecapping activities that had long prevented my forming any serious design. These bitter accusations might have been suppressed, had I, with greater policy, concealed my struggles, and flattered you into the belief of my being impelled by unqualified, unalloyed inclination; by reason, by reflection, by everything. But disguise of every sort is my abhorrence. Nor am I ashamed of the feelings I related. They were natural and just. Could you expect me to rejoice in your connections to the NYPD?—to congratulate myself on the hope of friendship with Fusco, whose condition in life is so decidedly beneath my own?"

Josselyn felt herself growing more angry every moment; yet she tried to the utmost to speak with composure when she said:

"You are mistaken, Mr. Reese, if you suppose that the mode of your declaration affected me in any other way, than as it spared me the concern which I might have felt in refusing you, had you behaved in a more gentlemanlike manner."

She saw him start at this, but he said nothing, and she continued:

"You could not have made the offer of your hand in any possible way that would have tempted me to accept it." 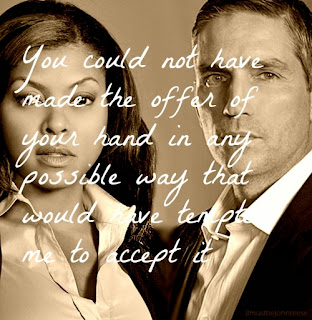 Again his astonishment was obvious; and he looked at her with an expression of mingled incredulity and mortification. She went on:

"From the very beginning—from the first moment, I may almost say—of my acquaintance with you, your manners, impressing me with the fullest belief of your arrogance, your conceit, and your selfish disdain of the feelings of others, were such as to form the groundwork of disapprobation on which succeeding events have built so immovable a dislike; and I had not known you a month before I felt that you were the last man in the world whom I could ever be prevailed on to marry."

"You have said quite enough, Detective. I perfectly comprehend your feelings, and have now only to be ashamed of what my own have been. Forgive me for having taken up so much of your time, and accept my best wishes for your health and happiness."

And with these words he hastily left the room, and Josselyn heard him the next moment open the front door and quit the house.

The tumult of her mind was now painfully great. She knew not how to support herself, and from actual weakness sat down and cried for half-an-hour. Her astonishment, as she reflected on what had passed, was increased by every review of it. That she should receive an offer of marriage from Mr. Reese! That he should have been in love with her for so many months! So much in love as to wish to marry her in spite of all the objections which had made him prevent his friend's marrying her partner, and which must appear at least with equal force in his own case—was almost incredible! 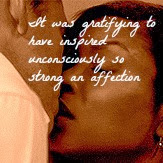 It was gratifying to have inspired unconsciously so strong an affection. But his pride, his abominable pride—his shameless avowal of what he had done with respect to Fusco—his unpardonable assurance in acknowledging, though he could not justify it, and the unfeeling manner in which he had mentioned Mr. Tao, his cruelty towards whom he had not attempted to deny, soon overcame the pity which the consideration of his attachment had for a moment excited. She continued in very agitated reflections till the sound of Lady Stanton's carriage made her feel how unequal she was to encounter Kara's observation, and hurried her away to her room.

You can read the entire text of Pride and Prejudice, free, at Project Gutenberg.
Posted by Erin O'Riordan at 12:00 AM