Castle in the Air: A Princess Story We Can All Get Behind

I wasn't originally planning to read the sequel to Howl's Moving Castle any time soon. One day in November, my husband got a flat tire. We took his vehicle to the repair shop in our neighborhood, and it was such a beautiful day, we decided to take a walk while we waited for the new tire. Our walk took us past the library, so I impulsively suggested we go inside. I simply love to be inside the library, even if I don't have any "official business" there. My husband, however, seemed to think I was there for a purpose, so on the spot, I devised a purpose. I thought of a book I didn't own but that was on my to-read list, and one I knew the library had in its collection. As a result, I finally read a second book by Diana Wynne Jones. 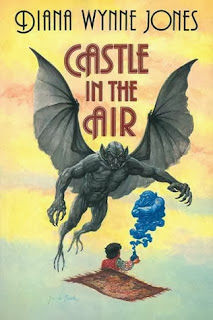 To discuss this book, I must mention some spoilers. Don't read any further if you don't want to be spoiled.

Castle in the Air by Diana Wynne Jones

What a clever story. All throughout the first half, I kept waiting for the Howl, Sophie and Calcifer I knew and loved from Howl's Moving Castle to show up. I saw the Miyazaki cartoon first, and then I read the novel. They're different animals, but both very good. I love Howl and Sophie as a couple, so I was excited to read more about them. I knew going into this book that Howl and Sophie aren't the main focus of the book, but show up at the end.

The main character in this volume is young Abdullah, an incorrigible daydreamer. A mysterious stranger shows up a his humble stall in the marketplace, where Abdullah sells carpets, and offers to sell Abdullah a magic flying carpet. Abdullah can't seem to get the hang of the carpet at first, but it seems to take him places while he's sleeping. On one of these nocturnal voyages, he meets and falls in love with the beautiful, witty, educated princess Flower-in-the-Night. To his horror, Flower-in-the-Night is stolen by a winged djinn.

The djinns in this book are something like angels, although angels appear in the story as well. They're powerful beings, usually on the side of good, but with the capacity to do evil, sometimes against their will. The novel features two djinns who are brothers. Hasruel is basically good, but is forced to serve his brother Dalzel because Dalzel stole and hid the piece of Hasruel that keeps him alive. Dalzel isn't terribly evil, but he is terribly greedy.

Abdullah's adventures culminate in the discover of many princesses, of all shapes, ages, sizes and colors. But first, he acquires a genie in a bottle, is transported to the land of Ingary (Sophie's homeland), meets an old soldier who becomes his companion, and adopts a mother cat and her kitten (even though Abdullah cares much more for dogs than for cats).

It turns out Howl, Sophie, and Calcifer were there almost from the beginning, just in different forms. First, Abdullah meets a witch named Lettie. Lettie is married to one of the king's wizards, Wizard Suliman, and is very pregnant. (At the end of Howl's Moving Castle - the novel, anyway - Wizard Suliman, a.k.a. Ben Sullivan, asks Lettie if he can take her on as his apprentice. Their marriage and impending parenthood is news.) Lettie recognizes the black cat as her sister, Sophie. Sophie then returns to her human form.

It seems that Howl turned Sophie - also pregnant at the time - into a cat while they were having an argument. (Howl and Sophie are always arguing - it's how they express their affection. They're a loving, but proud and stubborn, couple.) Then the djinns stole their moving castle from them, and Sophie was magically thrown from the house. She gave birth to her son, Morgan, while in cat form. Morgan has only ever been a black kitten, and does not take to being a baby human immediately. The now-human Sophie is pleased to be reunited with her sister, but doesn't know where Howl is.

The old soldier uses a wish from the genie to transport himself, along with baby Morgan, to the castle in the air. In what used to be Howl and Sophie's home, Dalzel is hoarding every princess in the world, intending them all to be his wives. Abdullah, Sophie, and the soldier collaborate on a scheme to free the princesses, rescue Flower-in-the-Night, and return baby Morgan to Sophie.


Howl and Calcifer, it turns out, have been hiding in plain sight throughout most of the book as well. Howl is the genie in the bottle, and Calcifer is the flying carpet. Flower-in-the-Night releases Howl from the genie bottle, Howl gets to hold his baby son for the first time (declaring him "ugly" and "a chip off the old block"), the princesses get to return to their lives, and Abdullah is now free to marry Flower-in-the-Night, who's only slightly upset with him because he hasn't tried to kiss her yet.

It would be wonderful to see this as a Hiyao Miyazaki movie like the Howl's Moving Castle. Castle in the Air would be a princess movie with real diversity of princesses, and heroines valued for their intellect and not just their beauty. I wouldn't quite go so far as to say it's as good as the first book, but it's definitely worth a read for lovers of Howl and Sophie.

The message I got from this book was, "Daydream all the time, because the more you daydream, the more your dreams will come true." I approved this message.


View all my reviews on Goodreads