I won't be adhering to the rules of SOC Sunday this morning, because I feel an untimed, unthemed ramble coming on. I need to collect my literary thoughts. 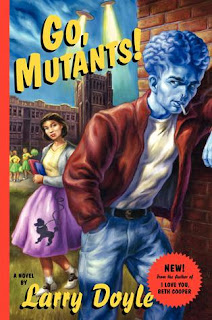 First, I read Go, Mutants! by Larry Doyle this week. Doyle is a former writer for The Simpsons, so he gets my sense of humor. The blue-skinned, James Dean-esque alien on the cover is J!m. (Like P!nk. Only blue.) His mother is Miw, a cat woman. Brief mention is made of the mysterious death of Miw's sister Sakhmet.

Sakhmet, also spelled Sekhmet, is one of my favorite Egyptian goddess. A personification of the harsh and sometimes deadly rays of the sun, the death-goddess is depicted as a woman with a lion's head. In Beltane, Allie - a priestess dedicated to the fire goddesses of the world - is tattooed with the image of Sekhmet.

The B-movie convention of cat women from outer space was kept alive in the '90s by Shakespear's Sister. It was a theme of the album Hormonally Yours, which included a track called "Catwoman." I seem to remember hearing on the radio that the track, and some of the other visitor-from-another-world-themed songs on the album, were inspired by the old film Cat-Women of the Moon.


But the original cat woman, Sekhmet, was from ancient Egypt, and so (according to her belief in reincarnation) was Tina Turner. In her autobiography (co-written with MTV reporter Kurt Loder) I, Tina, Turner expressed the belief that she is a reincarnation of the Egyptian woman pharoah Hatshepsut.

I had to get I, Tina off the shelf when Anderson Cooper had as his talk show guest Robbie Montgomery. I recognized her name from the book - she was one of the original Ikettes. The story goes that in 1965, the Ikettes scored a string of pop hits independent of Ike & Tina. To capitalize on their newfound fame, Ike Turner sent out touring groups composed of three random female singers under the name "The Ikettes."

Screwed out of royalties (they were paid as band members, not recording artists) and not even getting to tour behind their accomplishments, Robbie Montgomery and the other two original Ikettes walked. Since Ike Turner owned the name, their attempt to make it on their own fizzled.

If you're a '90s girl and you knew exactly what I was talking about when I said Shakespear's Sister, you probably know the Salt N Pepa jam "Shoop." I have to share it just for the fashion alone, the very epitome of '90s style. (Well, this and X-Girl by Kim Gordon.)

You may or may not remember that it contained a sample of The Ikette's "I'm Blue," with Tina Turner as a backup singer.

According to Anderson, Robbie Montgomery, who was homeless for a time, now stars with her son on a restaurant reality show called Welcome to Sweetie Pie's on Oprah's OWN network. (I don't have cable, and I've never seen it.) It's never too late for a comeback. I wish her restaurant venture much success.

My Irish granny and I both like to watch Anderson. When I was a high school girl in the '90s, Anderson Cooper was a reporter for Channel One, the news program we watched in class at the start of every school day. (So was Lisa Ling, the reporter who has her own show on OWN.) Next week he has some more great guests: Janet Jackson on Monday, Madonna on Wednesday.

Random fact: Janet by Janet Jackson was the first CD that I ever bought.

Sometimes I also watch Dr. Phil. He had Eric Roberts last week. Eric Roberts is sexy, with his lazy Southern accent - even as the smarmy gangster in The Dark Knight. (Not sexier than Christian Bale, of course - or Cillian Murphy, my new fave since I saw him in In Time. I would never have guessed that he's from County Cork - his American accent is really good.) But Roberts is on my permanent shit list, not only because of his domestic violence conviction (he admits he shoved his wife into a wall) but because he's one of those really damaged addicts that it's so hard to love. I finally know how Julia Roberts feels - my brother is mean when he's drunk, too. I wish him much success - just away from women.

This is Cillian Murphy.

Interesting facts. I didn't know that Shoop was sampled from an Ikette's song.

That was QUITE the dump. And WHAT?? Anderson Cooper was on Channel One? I was a teacher and watched that every morning with my class!

Oh yes, I remember him quite clearly.