An Interview with Mitzi Szereto!

Erin: Were you a fan of Jane Austen before you started writing Pride and Prejudice: Hidden Lusts?

Mitzi: Yes, most definitely. And I have to credit the BBC TV adaptation of the novel for inspiring my interest in all things Austen. The series was perfection and the actors really brought to life the characters in a way that I believe will never again be achieved. What particularly appeals to me about Jane Austen is her wit and sense of satire. She points out with great cleverness the hypocrisy and ridiculousness of “society.” I bet a lot of people would love to hear what she’d have to say about our modern times!

Mitzi: Yes, I did find it relatively easy. However, I should add that I wanted to keep the characters in, shall we say, character, and for their sexual hijinks to be exactly the kind of thing we’d expect them to get up to. As for erotic tension in the original, it was most definitely there, particularly between Elizabeth Bennet and Mr. Darcy. Those two were buzzing with sexual tension! Lydia Bennet was also a highly sexualized character, and Austen was giving us a lot of not-so-veiled hints about her promiscuity; I just ratcheted it up to the next level. Well, several levels, actually. 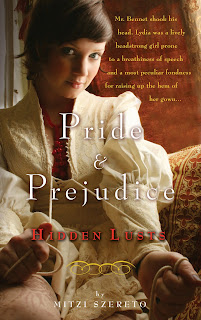 Erin: Are you currently planning to bring your blend of humor and erotica to any other public domain works?

Mitzi: It’s quite possible, yes. I really enjoyed writing Pride and Prejudice: Hidden Lusts and I hope readers enjoyed reading it, too. There has been a lot of controversy about my version, but frankly, I think these people need to get a sense of humor. The book is just a bit of good harmless fun, and in today’s world, I think we can all use some of that. As for combining humor and the erotic, I love it! People need to get a sense of humor about sex as well. Seems like everyone takes it too seriously. I say lighten up and have a laugh!

Erin: As a transplant from the U.S. to the U.K., do you feel more American or English?

Mitzi: I definitely feel more English. I never felt American, even when I lived in America. Maybe it’s the English eccentric thing that fits me, I don’t know. I definitely have more of a kinship with the English sense of humor as well. I wonder if when I grow old I’ll turn into a female version of Victor Meldrew?

Erin: You have a quirky sense of humor. Where does that come from? Other than your own writing, what do you find funny?

Mitzi: I’ve always been quirky. It’s part of my personality and has been ever since childhood, so naturally it translates into my sense of humor. I have no idea where it comes from. To be honest, I’ve never really sought anyone’s approval for what I do, so perhaps that gives me more freedom to just be myself. ­As for what I find funny, it’s quite wide-ranging, though I will say that I do not find the majority of contemporary American humor remotely funny. Just the opposite, in fact. Unfortunately, a lot of contemporary English humor is following suit, particularly with regard to television, in that they are trying to parrot the unfunny American sitcoms and crude comedians that are repeatedly shoved down our throats. I quite liked the earlier season of the League of Gentleman

BBC series, but for the most part I’m a bit of a dinosaur in my tastes. I love the older English comedy series such as One Foot in the Grave and Keeping Up Appearances.

My taste in American humor goes even farther back to The Marx Brothers and those madcap comedy films from Hollywood’s Golden Era. Give me Cary Grant any day! I also enjoy Jackie Mason. Classic stuff!

Erin: Your next project, editing Red Velvet and Absinthe, an anthology of paranormal erotica, took a completely different tone. What caused you to switch gears?

Mitzi: I love switching gears. I think it would be boring to keep doing the same thing over and over. I actually had Red Velvet and Absinthe

on the back burner for a number of years. I’ve always been a huge fan of Gothic fiction, and I’m surprised that I didn’t go this route a lot earlier in my writing career, though, without giving too much away, I will say that the Gothic is going to make another appearance in a future work. It was just down to luck and timing that RV&A got off that back burner and finally came to fruition. I’m really pleased with how it’s turned out. The quality of work is extremely high and each story has something different to offer. It was a pleasure working with so many talented writers. 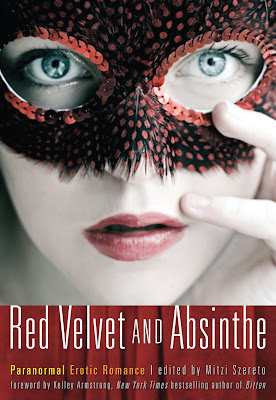 Erin: Other than the BBC production of Pride and Prejudice, what's your favorite Colin Firth movie?

Mitzi: I have to say P&P is the absolute pinnacle of Colin Firth for me. I know he’s said that he doesn’t want to be forever known only as Mr. Darcy, but I think it’s a testament to his talent as an actor to have brought that character to life in the way he had. I’m not really keen on his comedy roles. Not that he isn’t good in them; it’s just that I prefer his more brooding side. It’s very sexy. 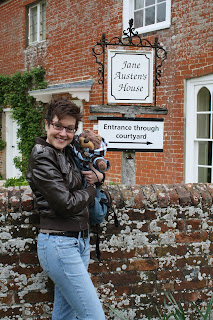 The image for the Red Velvet and Absinthe book is really striking, Mitzi! I loved it.

Nora, thanks once again for stopping by. Mitzi is a wonderful writer for Cleis Press, which publishes some really amazing anthologies. They send me free books, but that's nonetheless my honest opinion. If I don't like a book I'll say so.