Something weird has befallen the Virginia town of Fells Church in L.J. Smith's fifth volume in her Vampire Diaries series, The Return Vol. 1: Nightfall. At the end of the last book, Elena Gilbert was back from the dead, though she still had a certain unearthly, almost angelic quality about her. That's not the weirdest thing that's going on in this small Southern town, though.

In the televised version, the gang is still wrestling with Klaus. By the fifth volume of the book, Klaus has been defeated, and a new pair of villains emerges. They're the twins Shinichi and Misao, and they're kitsune, the shapeshifting fox demons of Chinese and Japanese mythology. I first encountered such a character in The Sacred Book of the Werewolf by Russian novelist Victor Pelevin, and subsequently read about in "The Fifth Beauty" by Ellison James. Kitsune are rare in Western mythology, though, and their evil tricks in this book are refreshingly original and twisted. 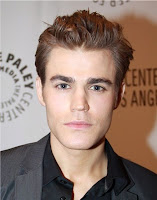 As longtime readers may know from my back-and-forth with Damon fan Shah Wharton, Stefan is my preferred Salvatore brother. Yet Stefan disappears fairly early in this 586-page paperback, and it's Damon's time to shine. Fans of the TV show should note one important difference between TV Damon and book Damon: book Damon's chastity is enforced by his vampirism. Like the monsters of Anne Rice's novels, Smith's vampires live only to bite and to drink blood, not to make love. For Elena, though, Damon's long-dead instincts are stirred for the first time in centuries:

"Human desire. Vampires didn't feel that. It was all sublimated into the need for the blood, always the blood...

"But he was feeling it.

"He knew why, too. Elena's aura. Elena's blood...He realized that it was a very long time since he'd felt this, and that therefore he must be quite wrong. But he didn't think so. He thought that Elena's aura would make the most fossilized of vampires stand up and blossom into virile young men once again."

Damon is at his most human at that moment. In other places within this book, under the influence of the kitsune twins, he is also at his most inhuman and monstrous. There is much horror in this volume, and not all of it takes places between Damon and Elena. Caroline is quite a surprise here, too, especially in the final twist at the end having to do with Tyler Smallwood. (On TV, this character's name has been changed to Tyler Lockwood, perhaps to avoid the implied reference to penis size. Both TV and book Tyler have tendencies to a be a dick. I want to like Tyler mostly because on TV he's played by a gorgeous young Latino, Michael Trevino. But I digress.) Caroline's unusually aloof, mean and boy-crazy, even for Caroline - the kitsune have gotten to her, too.

A Caroline possessed (in more ways than one), exotic werecreatures with nasty tricks up their sleeves and Damon on his best/worst behavior makes for a fascinating addition to the Vampire Diaries canon.

P.S. Sept. 30th is the last day to sign up for the Trick or Treat Blog Swap. 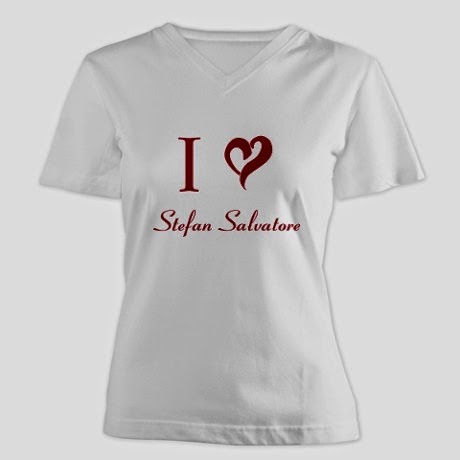 I Love Stefan T-Shirt by NarfWearDesigns

Oh loving your take on this book. ITs been a while now since I read it and you bought back some great images. You'll no doubt begin to fall a little for Damon as the book continue and you see more humanity - not to say he becomes a goodie-two-shoes of course ;D

I'll have to look at the Halloween thingy now. Sniff and sneeze - urgh! X

Your were book sounds great. I will have order that one. I have loved some of the other YA vampire series out there, but haven't read this one or watched the show. I am following the remake of American Teen Wolf on MTV. That was great.

Shah, I'm glad to see your computer has gotten over its issues!

Nora, there's a good chance you'll like this series if you enjoy paranormal YA. I'll be writing a vampire-themed guest post for your blog soon.

Eagerly awaiting the guest blog. And I had to come back and mention that kitsunes are quite popular in a bunch of fantasy anthologies I've been reading lately. I love those little fox people. Very wily!

World folklore - a rich source for inspiration for writers.

I read this one before the series and was glad I did. I think I would have been confused otherwise. This is definitely a dark, horror filled book. Not sure how they'll do it on t.v. since they are missing a central character. Great review!

I've heard rumors that one of the characters who's been left out of the TV series is going to be written in. We'll just have to watch and see.