July 31, 1994, South Bend. After a visit to Target at which I ordered a Frozen Coke in the café, I saw Baz Luhrman’s Romeo + Juliet for the first time. I wrote, “It really is a good story. The actor who played Romeo was seventeen when it was filmed.” I noticed Leonardo DiCaprio but I didn’t know his name yet.

According to Shakespeare, July 31st or Lammas Eve is Juliet Capulet’s birthday:

Nurse. Even or odd, of all days in the year,

Come Lammas-eve at night shall she be fourteen.

Were of an age: well, Susan is with God;

She was too good for me: but, as I said,

On Lammas-eve at night shall she be fourteen;

That shall she, marry; I remember it well.

Saturday, July 31, 2010, Mishawaka: Tit and I went to Battell Park for a free, open-air performance of The Taming of the Shrew by Notre Dame’s The Young Company. It was positively delightful. It had been too long since Tit and I had seen live Shakespeare. 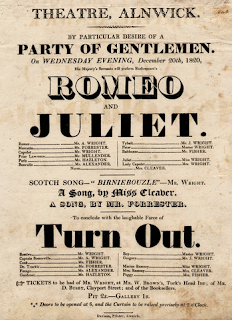