You can read my review of the first book in the series, DemonFire, here.

Kate Douglas had me hooked the first time I read Wolf Tales, to be honest, and I rarely dislike any of her work. We're friends on Facebook. She seems to be a genuinely nice person who adores her grandkids.

I liked this novel especially because it has a realistically strong heroine who happens to be a gorgeous women of color, specifically an African-American heroine. I love that Douglas, who is a Caucasian U.S. author, doesn't feel the need to restrict her heroes and heroines to one skin color.

These novels in the DemonSlayers series have a lot of fun paranormal elements and a fast pace that makes them exciting, but the main event is still the love story. Ginny and Alton make a great couple. They're both stubborn, he's a little arrogant, and they aggravate each other just enough to build the sexual tension.

If this were a movie, I would cast Lee Pace to play him - we know he looks great as a stately blond because we've seen him in The Hobbit - and True Blood's Rutina Wesley to play Ginny. 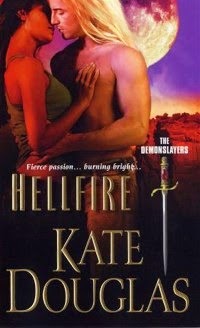 I purchased this book with my own funds solely for my enjoyment and was not obligated in any way to review it. I bought my copy from Better World Books. The used paperback appears to have begun its life as a library book, judging by the Winnipeg Public Library sticker on the front. Due to an unfortunate incident involving a cup of coffee, mine copy is, sadly, bound for the recycling bin.

But since we've mentioned the paranormal elements, let's talk about the lost continent of Lemuria. Douglas writes in her prologue:

"Thousands of years ago, the continent of Lemuria disappeared beneath the sea, much in the same manner of the continent of Atlantis. However, unlike the Atlanteans, Lemurians are not considered lost--legend says they relocated their entire society to a sanctuary deep within the dormant volcano known as Mount Shasta in the rugged mountains of North California.

"Much has been written about these tall and graceful beings of their great intelligence and beauty, their advanced technology and supernatural abilities, but no actual proof of their existence has ever been discovered."

Douglas is writing fiction, of course, but she isn't entirely making up the story of the Lemurians. She's incorporating some folklore, as skillful fantasy writers will often do. But Lemuria is also interesting for another reason, because it started out as a scientific theory.

If we look at Wikipedia, it says:

"Lemuria is the name of a hypothetical 'lost land' variously located in the Indian and Pacific Oceans. The concept's 19th-century origins lie in attempts to account for discontinuities in biogeography; however, the concept of Lemuria has been rendered obsolete by modern theories of plate tectonics. Although sunken continents do exist – like Zealandia in the Pacific as well as Mauritia and the Kerguelen Plateau in the Indian Ocean – there is no known geological formation under the Indian or Pacific Oceans that corresponds to the hypothetical Lemuria.

"Though Lemuria is no longer considered a valid scientific hypothesis, it has been adopted by writers involved in the occult, as well as some Tamil writers of India. Accounts of Lemuria differ, but all share a common belief that a continent existed in ancient times and sank beneath the ocean as a result of a geological, often cataclysmic, change, such as pole shift."

The name "Lemuria" came from an 1864 paper by English zoologist Philip Lutley Sclater. In attempting to explain why fossils from lemurs and related primate species are found in Madagascar and India but not in Africa or the Middle East, Sclater proposed a lost continent under the sea. He named it Lemuria after the lemur fossils. Sunken continents and lost "land bridges" were often theorized to explain the distribution of land animals separated by bodies of water before the theory of continental drift became widely accepted.

So that's the science part. Then, Wikipedia tells us, the legend of Lemuria fell into the hands of Helena Petrovna Blavatsky. The first time I ever remember reading her name was in The Magical Worlds of Harry Potter by David Colbert. In the chapter called "Who Really Wrote the Book on Divination?" It reminds us that one of Harry's textbooks at Hogwarts is Unfogging the Future by Cassandra Vablatsky. The Cassandra part, Colbert informs readers, comes from Greek myth. He then writes, "Cassandra Vablatsky's last name is no doubt taken from Helena Petrovna Blavatsky (1831-1891), a founder of the Theosophical Society, whose aims include 'investigating unexplained laws of nature and the powers latent in humanity' - in other words, magic."

Blavatsky, born in Russia, traveled widely as a young woman, including visits to Tibet and India, where she learned about Buddhism. She founded the Theosophical Society with two others in 1875, and from 1879 to 1888 she was the editor of a magazine called The Theosophist. She also wrote several popular books, including Isis Unveiled, The Secret Doctrine, The Key to Philosophy, and The Voice of the Silence.

Helena Blavatsky is variously credited and blamed for being one of the forerunners of the New Age movement, and her theories about the "seven root races" are blamed for influencing the so-called Aryan racism that in turn influenced Adolph Hitler/Nazism. She's been accused of being a devil worshiper or, at the very least, a modern Gnostic, because she wrote in The Secret Doctrine that the "serpent of Genesis" or Lucifer was not the representative of evil, but rather of enlightenment. She has also been accused of being a fraudulent medium who deceived people. So, although Colbert's mention of her is neutral, she's rather detested in some schools of thought.

It's the "seven root races" theory that includes the ancient Lemurians. Wikipedia tells us, "Within Blavatsky's complex cosmology, which includes seven 'Root Races,' the 'Third Root Race' occupied Lemuria. She describes them as about 7 feet (2.1 m) tall, sexually hermaphroditic, egg-laying, mentally undeveloped and spiritually more pure than the following 'Root Races.' Before the coming of the Lemurians, the second 'Root Race' is said to have dwelled in Hyperborea. After the subsequent creation of mammals, Mme Blavatsky revealed to her readers, some Lemurians turned to bestiality. The gods, aghast at the behavior of these 'mindless' men, sank Lemuria into the ocean and created a 'Fourth Root Race' – endowed with intellect – on Atlantis."

Wikipedia also has an entry on Lemuria in popular culture. From it, we learn that the hypothetical continent appears in, among other places:

So there you go: from serious scientific theory (subsequently discarded) to the philosophy of Helena Blavatsky and then into popular culture. Frederick Spencer Oliver's 1894 book (alleged to be a true story dictated to Oliver through channeling) A Dweller on Two Planets introduced the idea that white-robed Lemurians dwell in Mount Shasta.

In HellFire, Alton's favorite curse is "nine hells." Does the Abyss from which Dax originally came have nine different layers? If so, it recalls the nine circles of Hell in Dante's Inferno: Limbo (the virtuous Pagans who lived without knowledge of Jesus Christ), Lust (where the lustful and adulterous are blown around by severe winds), Gluttony (where the gluttonous are forced to lie down in freezing-cold slush), Greed (where the greedy spend their time jousting with enormous weights), Anger (where your punishment might be either constant fighting or endless drowning in the River Styx, depending on whether you were wrathful or sullen), Heresy (where the heretics lie in flaming graves), Violence (where the violent are boiled in a river of blood, torn apart by dogs, picked at by harpies, or wandering in a desert where fire rains from the sky, depending on their crimes), Fraud (where the fraudulent are sunk into stone ditches - that one actually doesn't sound all that bad), and Treachery (where the treacherous are frozen in a lake of ice).

Nine is also a favorite number in Norse mythology, which imagines there are nine home-worlds through which the World Tree Yggrasil grows. Sources disagree on the identities of the nine worlds, but they are often said to include Midgard (the world of human beings), Asgard (the world of the As, one class of Norse gods), Vanaheim (the world of the Vanir, another class of Norse gods), Jotunheim or Utgard (the frost giant home world), Alfheim (the elf world), and Hel (the underworld, where the dead go). But that's only six.

Separate from Alfheim is the home of the Dvergar, dwarves or "black elves." (This becomes an important plot point in the second Thor movie, subtitled The Dark World.) Their home-world is sometimes called Svartalfheim. That makes seven home-worlds for seven kinds of beings.

The other worlds are sometimes listed as Niflheimr (primordial ice that existed before creation) and Muspellheimr (primordial fire that existed before creation). In some literary works, however, Niflheim and Hel are used interchangeably. Some separate the land of the dwarves, called Nidavellir, from the land of the dark elves, although "dwarves" and "dark elves" seem to be used interchangeably. See, for example, Encyclopedia Mythica.

But Kate Douglas may not have been thinking of Norse myth, or even Dante, at all. Maybe she just thought "nine hells" sounded like an impressive number of hells.

What I'm Reading Next 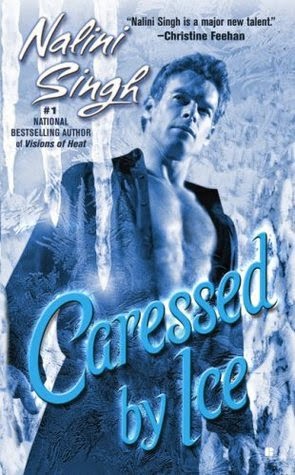 Judging by the cover, Nalini Singh's third book in the Psy-Changeling series of paranormal romances takes place in Jotunheim.
Posted by Erin O'Riordan at 12:00 AM