Review (Nonfiction) of 'The Girls: Sappho Goes to Hollywood'

The Girls: Sappho Goes to Hollywood by Diana McLellan: 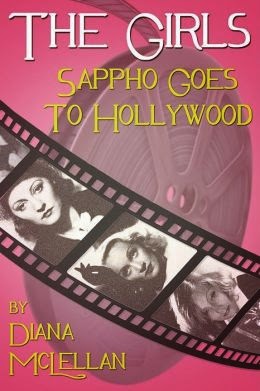 How was I supposed to resist a title like that?

This is the allegedly true, research-based story of Hollywood's two most famous LGBTQIA actresses of the 1930s, Ms. Greta Garbo and Ms. Marlene Dietrich. Neither woman self-identified as lesbian, bisexual, or pansexual during her lifetime, so I have to state for the record that it's a bit unfair to label them after their deaths, when they lived in a very different world than we do now. However, there is ample evidence to support that both women had ongoing romantic relationships with women and men. Dietrich's affairs seem to fit the bi/pan label more closely - she didn't seem to have much of a preference either way - while Garbo seems to have had a preference for women over men.

And yes, it does appear that at one point, they had a romantic relationship with each other.

Both are name-checked in Madonna's iconic hit "Vogue," but what did I really know about Dietrich and Garbo, whose best films were made in the 1930s, when my grandmothers were little girls? I'd read a little about Dietrich's sexy, androgynous, ice-blonde persona in film studies and media studies books and articles over the years. I don't think I've ever seen one of her movies.

Dietrich, who was born in Germany, is perhaps best remembered for the movie The Blue Angel. In it, she plays a character named Lola Lola who seduces a professor. In the English-language version, she performs a song called "Falling in Love Again," which became her signature song. Her first name is a contraction of the first name she was given at birth, Marie Magdalene. She died in 1992.

I know I've seen at least one Greta Garbo movie on the big screen - Anna Karenina (not the silent version, but the talkie), when I was a student at St. Mary's. I enjoyed it. Greta Garbo was born in Sweden. In addition to playing the title role in Anna Karenina, she is also known for her film Camille, based on the play by Alexandre Dumas fils. In her personal life, she was known for the great deal of secrecy around her, to the point that she was somewhat reclusive in her later years in New York City. She died in 1990.

According to The American Women's Almanac, Louise Brooks said about Garbo, "She made a pass at me." About Brooks, the silent film star who popularized the "bob" hairstyle for women, Wikipedia says she made friends with lesbian and bisexual women, and experimented sexually with them - including Garbo - but did not consider herself to be lesbian or bisexual.

Some of the other fascinating characters in Garbo and Dietrich's "sewing circle," according to this book, include:

Emma Goldman: Goldman can perhaps be considered the founder of the "sewing circle" of lesbian and bisexual women in the U.S. theater and film communities. She was an ethnic Jewish woman born in what is now part of Lithuania, but which at the time was part of the Russian Empire.

Moving to the U.S., she was an editor and orator whose causes included anarchy, reproductive rights, and gay and lesbian rights. She was said to have inspired the man who assassinated U.S. President William McKinley, although it was not her intention to do so. Goldman was strong critic of marriage and advocate of free love, and among her many lovers was, allegedly, Alla Nazimova.

Alla Nazimova: Born Miriam Leventon in Yalta, Crimea - the province that only a few weeks ago was taken over by Russia, although legally speaking it is part of Ukraine - the Jewish woman emigrated to the United States, where she became a theatrical and film actress. She is alleged to have had sexual relationships with a number of women, including Goldman, Eva La Galliene, Mercedes de Acosta, and Oscar Wilde's niece Dolly.

She appeared in the silent-film version of Camille opposite Rudolph Valentino and possibly carried on affairs with both Valentino's first wife and his second wife, Natacha Rambova. Nazimova was married to two men, resulting in two divorces. Toward the end of her life, her domestic partner was a woman named Glesca Marshall.

Nazimova was also known for generously helping other women launch their acting careers. Among the women she helped to get started in film was Anna May Wong. Nazimova continued working throughout her life. She appeared with a young Montgomery Clift - they played mother and son - in a stage play titled The Mother.

Natacha Rambova: Despite her Russian name, which she gave herself during her years as a ballerina, Rambova was an American of Irish descent. She worked on the set of Camille as a set and costume designer. She served as art director on a number of Hollywood productions, and later had some success as a fashion designer. She may or may not have been bisexual - Valentino was almost certainly bisexual or, perhaps, preferred men to women and was actually gay. Being a gay male was considered more taboo than being a lesbian or bisexual women, even in the relatively forgiving climate of the Hollywood Gilded Age.

What can be said with certainty about Rambova is that she was a spiritualist. McLellan's research indicated to her that later in her life, Greta Garbo sought out Rambova for seances. Garbo had remained friendly with Ramon Novarro, the Mexican-American actor who'd starred with her in Mata Hari. Novarro was friends with Rambova, and Garbo asked Novarro to arrange for her to meet Rambova for a seance. Novarro invited a crowd, though, which spooked Garbo, and she ran off without ever meeting Rambova.

That Novarro and Valentino were lovers is a bit of an old Hollywood legend. The legend goes that Valentino, famously well-endowed, gave Novarro a sex toy modeled after Valentino's own privates. Sadly, Novarro lost his life in 1968. He let two men into his home for the purpose of having sex with them, but they mistakenly believed he was hiding a large sum of money in the home. They beat and tortured him for hours trying to get him to say where the money was hidden, but he had none. They left him for dead, taking only $20 with them. He choked to death on his own blood as a result of the beating, probably unconscious. A Hollywood urban legend held that Novarro had choked to death as a result of Valentino's gift being forced down his throat, but this has no basis in fact.

Fun Rambova fact: In the Ken Russell film Valentino, she was played by Michelle Phillips of The Mamas and The Papas.

Eva La Galliene: Unlike the women mentioned above, La Galliene was never "in the closet." She lived openly as a lesbian during her own lifetime. La Galliene was an English theatrical actress whose mother was a Danish journalist. Her father was a French poet. La Galliene is said to have carried on a 5-year affair with Mercedes de Acosta.

La Galliene's acting credits include playing the White Queen in the 1955 TV-movie version of Alice in Wonderland.

Mercedes de Acosta: de Acosta was an American poet, playwright, and novelist of Spanish and Cuban descent. She was one of Garbo's closest friends and, according to McLellan, carried on romantic relationships with both Garbo and Dietrich. Her lovers were said to include the dancer Isadora Duncan (who died tragically at age 50 when her long, flowing scarf became entangled in the spokes and rear axle of the car in which she was a passenger), Nazimova, La Galliene, Ona Munson (best known for playing the madame Belle Watling in Gone With the Wind), and possibly Alice B. Toklas.

Among de Acosta's works for the stage included Jehanne de Arc (Joan of Arc). Eva La Galliene played the heroine onstage, but de Acosta hoped a filmed version would be a vehicle for Garbo. The film never materialized, however. She fell severely out of Garbo's favor, in part due to the behind-the-scenes manipulations of Salka Viertel and in part due to publishing a memoir that talked about Garbo. The memoir never explicitly referred to lesbian relationships, but Garbo was so protective of her privacy, even a veiled memoir was too much of a violation.

Salka Viertel: A Jewish woman born in what is now Ukraine, which was then part of the Austro-Hungarian Empire, Viertel was the screenwriter who co-wrote Garbo's films Queen Christina and Anna Karenina. She was a close friend of Garbo's and, according to McLellan, schemed to keep Garbo and de Acosta apart as much as possible. One of her sons married Deborah Kerr, the star of From Here to Eternity.

Tallulah Bankhead: The daughter of a respectable Southern politician who eventually served as the U.S. Speaker of the House, Tallulah never used the word "bisexual," but she did describe herself as "ambisextrous." She started modeling at age 15. Her theatrical career began on London's West End, and then she made the jump to the U.S. stage. She originated the role of Sabina in Thornton Wilder's The Skin of Our Teeth (another play that featured the young Monty Clift).

Bankhead's lovers were said to have included Garbo, Dietrich, de Acosta, Nazimova, and La Galliene, as well as Billie Holiday and Hattie McDaniel (who played Mammy in Gone With the Wind and was the first African-American actress to win an Academy Award, for that role).

Reportedly, Bankhead was David O. Selznik's first choice to play Scarlett O'Hara, but she was considered too old to play the character at the age of 36. The flamboyant, smoky-voiced Bankhead played a character called Black Widow in a 1967 episode of Batman, and Cruella de Ville is said to have been based on a caricature of her. After her stage and film career wound down, she became widely known as a radio show host.

As you can probably tell, I found this book absolutely fascinating. You'll probably enjoy it if you're interested in Old Hollywood history, women's history, and/or LGBTQIA history. Some of McLellan's sources are a bit dubious, but that's the nature of the beast when you're trying to uncover the history of something that was deliberately kept hidden. As the World War II era gave way to the 1950s, people in Hollywood had to worry about being associated with Communism. That gave them another reason to obscure and hide some of their past relationships, as well as the cultural swing that was becoming even more repressive of gay, lesbian, and bisexual sexuality. The 1950s were the golden age of the closet.

I bought this book with my own funds from Barnes and Noble and read it on my Nook. I was not obligated in any way to review this book. Here is the link: http://www.barnesandnoble.com/w/girls-diana-mclellan/1114477109

I'm not a Barnes and Noble affiliate. If you shop there, I don't get anything but the satisfaction of supporting a brick-and-mortar bookshop.

Hollywood Classics Title Index to All Movies Reviewed in Books 1 - 24 by John Howard Reid. $0.99 from Smashwords.com
Another essential book for a film buff's library, this one is packed with information and reviews. Some of the entries are quite extensive. JHR provides all the information you need, including complete cast and production staff. I find JHR's information invaluable. I like to read not only who acted in a movie, but who made it, both top-billed and lesser mortals. -- Ross Adams in DRESS CIRCLE mag.

Fun fact: The author Madeleine L'Engle has said that her first job after college was working for Eva La Galliene.