Excuse me, but why didn't any of you tell me this book was going to end so...? 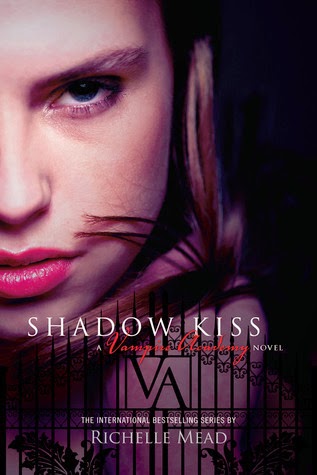 SPOILER ALERT! Go away and DO NOT READ if you don't want to know what happens in the third book in Richelle Mead's Vampire Academy novel series. This post will discuss the plotline of Shadow Kiss and will include spoilers. You've been warned.
When I finished Frostbite, I was worried about Lissa and Christian's relationship. He seemed so jealous of Adrian Ivashkov. Yet on the very first page, Rose Hathaway unfortunately finds herself inside Lissa's head while Lissa and Christian are getting very intimate.
I should probably mention that the sexuality in this series is not explicit. This isn't erotica. It's young adult paranormal fiction, and although there's some sensuality, there's no explicit detail. I wouldn't encourage my 10-year-old niece to read this series yet, but - allowing for individual differences in maturity - I'd think it should be fine for most readers 14 and up.
So we know right off that Lissa is in love with Christian. Later in the novel, they talk about marriage and having children. I'll be very happy if, at the end of this series, Christian and Lissa get married. She's the last living Dragomir, and that would be so lonely.
Let's face facts: my Vampire Academy OTP (one true pairing) is Rose and Dimitri. Things end very badly for Rose and Dimitri at the end of this book.
BUT FIRST! First, there's chapter 23. In chapter 23, Rose and Dimitri do the thing. He's 24, she's his 17-year-old student (one week away from turning 18), and they can't keep their hands off each other. They have the sex.

Again, not explicit, but rather poetically described from Rose's point of view. In Frostbite, we could presume that Christian was probably a virgin and that Lissa, the sexually experienced one, took the lead and guided him.We know Rose, despite her reputation as being sexually adventurous, has never gone so far as to have intercourse, and we can assume gorgeous Dimitri Belikov is not a 24-year-old virgin. (Not there's anything wrong with being a virgin. Not that there's anything wrong with not being a virgin. Everybody has to make the sexuality decisions that work best for themselves.) As usual, Dimitri gets to be the teacher and Rose the student.
Yes, this seems a little wrong. She's really close to being an 18-year-old adult woman, though - that one last week isn't going to magically make a difference. She's already been in combat with mortal enemies and watched a friend die. For that matter, she's already come back from the dead herself! For all practical purposes - if not for all legal purposes, depending upon the age of consent in Montana - Rose is a grown woman. 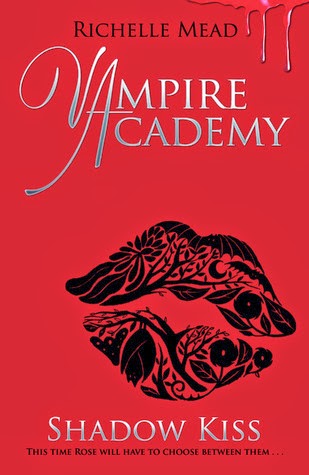 (I looked it up. Weirdly, Montana has different ages of consent for women and men. Women can legally consent to sex with a man over 18 at the age of 16, but the age of consent for men is 18, and a woman has to be 18 to legally consent to sex with a woman over 18. Montana, your sex laws are heterosexist - you should fix that.)
Yet, it still doesn't seem quite as wrong as the relationship between 17-year-old Muslim Bosnian basketball player Irena Zaric and 40-ish Coach Dino in one of my all-time favorite books, Pretty Birds. ("You could run laps, or...") Coach Dino is married and sleeping with the women's soccer coach. At least Dimitri is only seven years older than Rose (not that age matters much once you turn 18), single, and unattached.
If you want my detailed exploration into the intricacies of underage intimacy, you can read "Reviving the Runaways: Who Should Rule When Law, Psychology, and Teenage Hormones Collide?"
Rose and Dimitri have legal, consensual sex and then admit they love each other. Their feelings are mutual - they are in love. 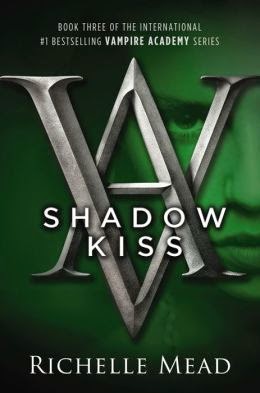 And then the bad thing happens. The very bad thing.
Remember at the end of the Vampire Academy movie how all the Strigoi (bad, undead vampires, not the living Moroi like Lissa and Christian) were lurking in a cave, and Strigoi Ms. Karp ominously said, "Soon?"
Well, that didn't happen in the first book at all, but in this third book, the Strigoi do get onto the grounds of St. Vladimir's Academy. (Ms. Karp isn't with them, though.) They kill people, and they kidnap people to snack on later. The Guardians decide to go on a risky rescue mission.
This is a bad idea. The Strigoi get Dimitri. They turn him into a Strigoi. Dimitri is now not only dead, but he's become an evil vampire. The last line of the book is, "I set off, off to kill the man I loved."
I feel a little bit like Richelle Mead has taken a silver stake to my heart. I remind you, I'm only halfway through the series. I have three books to go, and half of my OTP is dead already. This reminds me unpleasantly of a certain TV series that has ripped out my beating heart and shown it to me. NO ONE warned me that anything sad was going to happen to Rose and Dimitri's relationship. I feel...sad, in the way only devastating fiction can create.
Damn you, Vampire Academy movie, for making me read these sad-ass books.
I checked this book out from my local library. I wasn't solicited or obligated to review it in any way. This review represents my own honest opinion.
Next up: Panic, a contemporary YA - no fantasy or dystopian elements - by Lauren Oliver, which I got for free from the Amazon Vine program.

Don't worry, things will get better. Richelle will just rip your heart into tiny little pieces, stomp on it a few times then set it on fire but it'll get better.
Richelle Mead may be a sadistic person but she loves a happy ending. Or a very open ended kind of ending (Not VA don't worry)

Thanks, Luna, for making me feel a teeny bit better in a non-spoilery kind of way. I appreciate the comment!