Why Do We love Vamps? In a Word: They’re Hot - Suz deMello Guest Post

Like great chocolate, vampires are smooth, seductive and dangerous. They're invariably wealthy because they prey upon whoever they please and can steal for a living if they choose. Anne Rice's Lestat is the classic example. 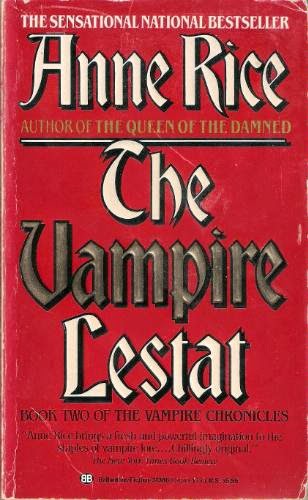 And many female fans enjoy the fantasy of losing control to a sexy, dominant male. On top of that, our culture worships the young and the beautiful.

In my writing, I emphasize not only the vampires’ sensuality, but also their unnatural strength and speed. In Rakes in Tartan, my hero, Tor Kilburn, doesn’t box or fence to stay in shape, but he “flies”—or appears to. Here’s his version of taking a relaxing jog at night:
Tor stood on the roof of the manse he shared with Andrew. Though the home was centrally located near Piccadilly, the misty streets ’round about were deserted at this extremely late hour. The quarter-moon’s light struggled through the low-hanging fog and gleamed on damp cobbles and pavements. Few lamps broke the darkness. Silence reigned. Not even the turd wallopers were abroad, though the olfactory evidence of their foul cargo floated above the lanes.
He stretched, enjoying the freedom he felt, having stripped off the confining jacket and snug knee-breeches required for entry into Almack’s. Cloak flapping over plain trousers, he leaped to the next building, then to the next and the next. He landed squarely on a girder supporting the glass roof of the Burlington Arcade, knees half-bent.
He sprinted along the girder, then jumped again, arms spread wide. The breeze caught his black cape and helped him across Piccadilly, enabling him to land soundlessly on the roof of Fortnum and Mason.
He enjoyed his hobby as much or even more than he had in Oxford. ‘Twas a lively town but lacked the number and variety of buildings London boasted. Though he had become intimately acquainted with the several colleges comprising Oxford, the sameness of the Gothic architecture had lost his interest. London was large, diverse and highly entertaining...
Oh, and yeah: he’s hot. 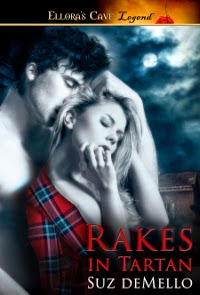 Rakes in Tartan by Suz deMello
Setting: London 1816
The social season promises both sex and danger for Torquil Kilburn and Andrew MacReiver, Highland heirs arrived in London to seek brides. The Scotsmen must  negotiate the complicated morés of high society to woo and win an exquisite debutante and her passionate, unconventional mother while keeping their vampire heritage a secret.
But evil stalks the ballroom at Almack’s, the streets of Piccadilly, the drawing rooms of the ton. Headless bodies have been found drained of their blood, for another vampire haunts the streets of London, murdering noblemen. As he draws ever closer, Tor and Andrew must fight not only for love, but for their lives.
Buy it here:
http://www.ellorascave.com/rakes-in-tartan.html
About the author:

Her books have been favorably reviewed in Publishers Weekly, Kirkus and Booklist, won a contest or two, attained the finals of the RITA and hit several bestseller lists.

A former trial attorney, her passion is world travel. She’s left the US over a dozen times, including lengthy stints working overseas. She’s now writing a vampire tale and planning her next trip.

--Find her books at http://www.suzdemello.com

--For editing services, email her at suzswift  (at) yahoo.com

--Visit her group page at https://www.facebook.com/redhotauthorscafe

The First Bite Is the Deepest by Elisa Catrina. $2.99 from Smashwords.com
“Funny and clever and emotionally hard-hitting” "A perfectly creepy read." Elisa Catrina's debut novel begins as a quirky send-up of vampire romance, but quickly turns sinister. High schooler Stella Ortiz starts dating the mysterious new guy, but her friends are convinced he's bad news: Sebastian misses tons of school, he day-drinks something that smells like pennies, and oh yeah, he's a vampire.