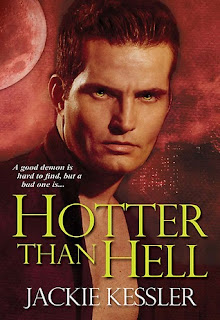 Hotter Than Hell by Jackie Kessler


This is a very good story, well told. The first book in the series, Hell's Belles, is still my favorite, and honestly, I wouldn't be too sad if it had been a stand-alone, because it ends so perfectly. But the story keeps going, and there's still one more part, Hell To Pay. I'm scared of what's going to happen in that one.

I liked Virginia as a character, and I liked the slow build of Daun's transition from purely emotionless demon to a truly empathetic being - even if his empathy is limited to one mortal woman. I think my favorite part, though, was the flashback to the relationship between Daunuan (Don Juan) and Wolfgang Amadeus Mozart - damned through no fault of his own, but through his father's infernal machinations - who would go on to write 'Don Giovanni' in Daun's honor. I really like how Kessler plays with history here.

The witch in me is less crazy about the characterization of Pan, who in this is just an evil, evil thing that gets his proper reward for being the scumbag that he is. Authors have the right to do whatever they want with their characters, but to witches, Pan is often used as the name of the good god, the consort of the Goddess, the divine masculine. We don't equate him in any way with evil or with the Christian devil, but this book certainly paints him in a horrifying light. Overall, I think it's fine, because the book needs a villain, and Kessler's Pan is a good literary villain, but Pan shouldn't always be judged so harshly.

You can read my further thoughts on Pan here.

Of course, the book has another villain - Eris, the ancient Greek goddess of strife and discord. I liked Eris as a literary villain because she's so seductive, she's almost a likable character, but she's also a little bit frightening. Okay, she's a LOT frightening. Daun figures out a way to get the better of her, and also of Pan. The happy ending isn't quite the one you'd expect in a paranormal romance - Kessler admits in the afterward it's less of a PNR and more of a dark urban fantasy. I didn't know if I was going to like the ending, but I thought it was appropriate for this novel.

I don't know yet whether or not I'll read the fourth book in the series. I may pretend this is a trilogy, since there are only three paperbacks. I'm scared that Jessie and Paul will get broken up in the next book. That would be a tragedy.

Should you decide to complete the Hell on Earth series and read Hell to Pay, you can get it for only $.99 on Amazon.

Disclosure: I paid for this book with my own money. This review represents my own opinion; I was not compensated for this review in any way, nor was I asked by anyone to write this review. I am an Amazon.com affiliate, and if you make a purchase after clicking through the Amazon links on my blog, I will receive a small commission of a few cents.